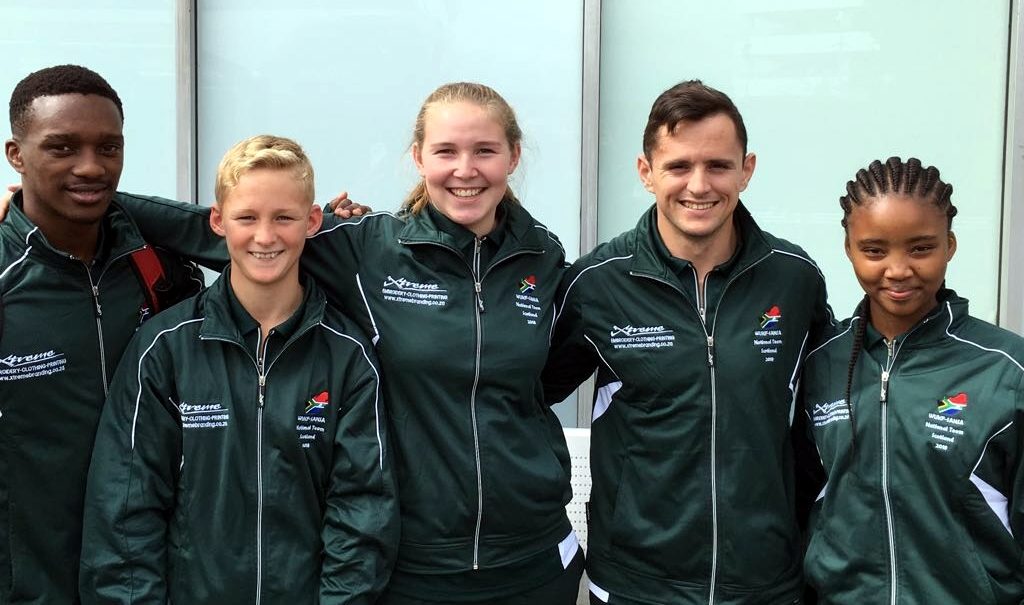 A five member karate team from the Eastern Cape recently concluded their campaign at the 7th WUKF World Karate Championships held in Dundee, Scotland. The United Shotokan-Ryu (USR) team members competed under the banner of the South African National Shotokan Association (SANSA) at the prestigious Championship.

This was the first time that any of the team members had competed in an international event. More than 2200 karateka representing 40 countries contested this year’s event which was held over four days. The categories were extremely competitive with the Championship largely dominated by the European nations. The only exception to this was the USA’s AAU which finished in second position overall. The strong Romanian Team topped the medals table.

Both Claassens and Kuhlane advanced to the second round of their kumite (fighting) categories before losing their matches. Olivier, who was ahead on points during her first round fight, was unfortunately disqualified due to excessive contact. Linde Delport (NMMU) fell-out in the first round against some incredibly strong opposition.

Singata advanced to the finals (final four competitors) in both the Junior (18-20yrs) and Senior Men’s (21-35yrs) under 65kg Kumite Categories. In his final matches, he lost both by the narrowest of margins, but still did exceptionally well to bring home two bronze medals. According to United Shotokan-Ryu Chairperson, Gary Grapentin, Singata is the only South African to ever contest three finals at a single WUKF World Championship. In addition, Grapentin believes that he is also the first South African to ever medal in a senior men’s kumite category at the WUKF World Championship.

Leading-up to the Championship, the team members also had the opportunity to attend a seminar conducted by UK Karate legend, George Best (not to be confused with the Northern Irish footballer of the same name). Grapentin hopes to bring Best out to South Africa in the future in order to assist with preparations for the next WUKF World Championship which will be held in Belarus in 2020.

All the team members who competed in Scotland are expected to participate in the Sunshine Coast Karate Open Championships which will be held at the Fish River Resort on the 4th of August.