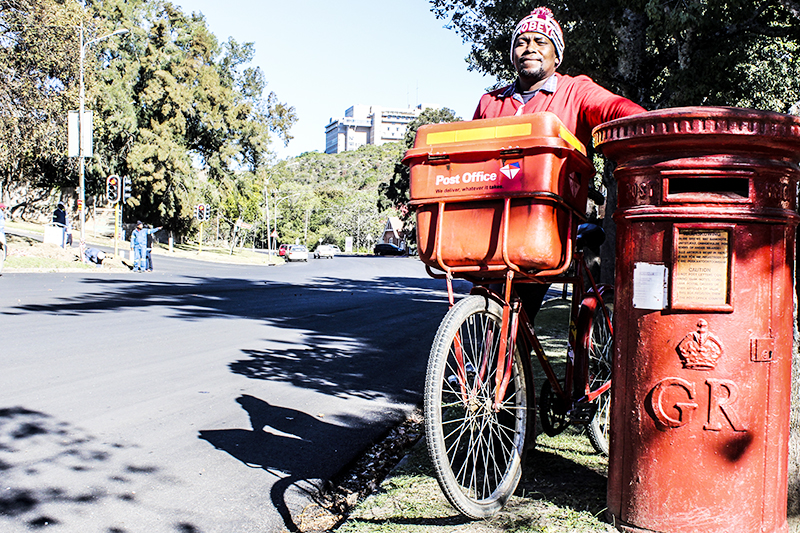 SA Post Office delivery person Angelo Maarman stops for a rest against a postbox in Beaufort Street on Tuesday 19 June. Six of the historic red postboxes were saved for the city’s landscape hours earlier through a last-minute reprieve, when a quick-acting eyed municipal official stopped them being dug out and removed. Story on Page 3. Maarman is one of 16 people employed by the Post Office in Grahamstown, delivering mail on foot and on bicycles. Photo: Sue Maclennan

Grahamstown’s historic postboxes are safe again, thanks to a quick-acting municipal official, and a local construction company. Sue Maclennan reports

When Grocott’s Mail posted a photograph this week on social media of one of the city’s historic postboxes lying on its side, it reached more than 15 000 people within two days, was shared nearly 100 times and 120 people commented on it. With two or three exceptions, residents and people with Grahamstown connections were horrified to hear that the landmarks were being dug out and removed.

Grahamstown cares about its postboxes.

So does the South African Post Office, it turns out. Eastern Cape Regional Director for Transport and Logistics, Lawrence Matiwane, confirmed on Tuesday 19 June that it was Post Office staff who had removed the postbox on the corner of Oatlands Road and Speke Street in the photograph, as well as others in Hill Street and George Street. It was part of a new national policy to stop the street postbox service, as well as protect the historic assets.

“People have lost confidence in postboxes,” Matiwane told Grocott’s Mail in a telephone interview on Tuesday. “They’re using IT, or mailing direct from the Post Office.”

Matiwane said audits conducted last year and over the first six months of 2018 had shown that the red boxes were no longer carrying mail.

“When our regional management met, we discussed this and it emerged that not only were the boxes not being used, but some were being stolen for scrap metal,” Matiwane said. “That’s when we said, no let’s remove them.

“The historic postboxes are part of our heritage and we want to protect them, so we decided to remove them and keep them at the depot. We planned to donate them to [secured sites such as]zoos and museums. It was a decision we took quickly to stop the vandalism and theft we saw happening in other areas of the country.”

After a phone call today from a Makana Municipality official, however, the Post Offices agreed to leave the city’s postboxes where they are – or at least six of them.

Hanekom, concerned that the town was about to lose the historic landmarks, asked for six of them to be left where they were.

“He identified six that are key tourist attractions,” Matiwane said. “He said the Makana Traffic Department would undertake to look after them and maintain them.”

Grocott’s Mail confirmed this with Hanekom, who is the Assistant Director of Traffic and Licensing.

He said Makana Traffic Department would paint and maintain the postboxes, and keep an eye on them.

“And I’m sure the town will look out for them too,” he said.

On Thursday 21 June, a team from CM Heunis construction company arrived to reinstate the Oatlands Road postbox. “We are doing it free of charge,” said the company’s co-owner Hain Ackerman. There was a flurry around town and on social media on Tuesday 19 June, following Grocott’s Mail’s post, as residents checked whether postboxes in their areas had been removed.