Grahamstown on show at Comrades 2018 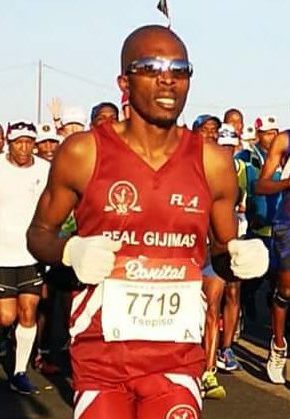 Tsepiso Nzayo getting off the mark for the 2018 Comrades Marathon. Photo: Supplied

The Comrades Marathon, which is in its 93rd year, is an ultramarathon run annually since 1921. Participants of the race run approximately 89-91km within 12 hours, from Pietermaritzburg to Durban. The Comrades Marathon is the world’s largest and oldest race, with participants over the age of 20 years. Runners have to have successfully ran a 42,2km race in five hours to qualify for the Comrades Marathon. Taking part of the race, each athlete must reach five cut-off points in specified times to be allowed to complete the race.

“We need more of us women to train together in Grahamstown,” says Managa who believes that people should not only run for weight loss but for mental health as well as for their health in general. Managa was unfortunately retracted from the race at 68,87kmn after arriving at the cut-off point a minute and 12 seconds late. Managa ran the race after being involved in a car accident three weeks prior to the marathon.

Nzayo received a bronze medal after finishing the race at 09:21:32. Although he was advised to stop after he had a knee injury, Nzayo continued until the end. “I had a plan and so I had to stick to it,” said Nzayo who believes that if he had stopped all his efforts would have gone to waste.

Nzayo was running for a charity organization based in Port Elizabeth with a branch in Cala, the Unako Community-Based Movement (Unako CBM). Unako CBM is a black & youth organisation aimed at developing literacy among primary and high school learners.

“Races like these benefit mostly white people, it is then important for black people to stop complaining and provide solutions for the already identified problems facing the black child,” said Nzayo, who plans to donate all of the funds he raises when partaking in races.

“Running makes you believe that pain is temporary and you get to realise that life is precious. Grahamstown, stand up,” said Managa. Both these first time Comrades Marathon runners are planning on taking part in the marathon again next year.

People can still support Nzayo with an amount between R100-R1 000. Bank details are as following: