Pupils relive Battle of Grahamstown… with a creative twist 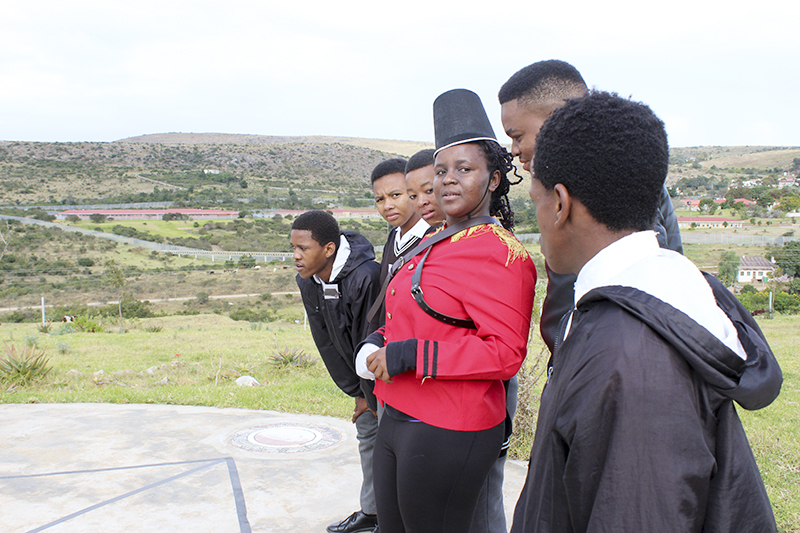 Phemelo Helemann leads the 'British soldiers' in a 'battle games' re-enactment of the Battle of Grahamstown at Egazini. Photo: Sue Maclennan

The confrontation nearly 200 years ago between amaXhosa warriors under Chief Ndlambe, led by Makhanda ka Nxele, and troops of the British commanded by Lieutenant Colonel Thomas Willshire, will be commemorated on 22 April 2019.

The Department of Arts & Culture erected the Egazini Memorial in 2001 to honour the fallen Xhosa warriors – since badly vandalised.

In 2015, mosaic pillars by local artists, each commemorating some aspect of the history of Egazini and the Battle of Grahamstown and the surrounding areas, were erected. A mosaic toposcope points towards some of the key places in early Grahamstown history and it was on this structure that a group of History postgraduate students took pupils from eight Grahamstown schools through battle “games”.

The History Learning Project aims to give township pupils depth to their school curriculum with an erbriched history of the Makana community. The project is sponsored by the Eastern Cape Provincial Performing Arts Council.

The project aims to help them understand Grahamstown’s 200-year history, so they are more aware by the time 22 April 2019 rolls around.

“It is happening via history teachers and it is going to be part of their syllabus,” lecturer and head of the Isikhumbuzo Applied History Unit Julie Wells said. “The aim is for the kids to have a better understanding of their history. It was ahead of the Battle of Grahamstown that Makhanda prophesied that water, not bullets, would come out of the guns of the British.”

Drama/history postgraduates Masixole Heshu (leading the amaXhosa warriors) and Phemelo Helemann (leading the British soldiers) took pupils through the staged battle games with Likhaya Jack, as the judge, blowing loudly on a red vuvuzela before announcing his verdict on each battle. Each session was an hour long.

After the play the pupils were given an opportunity to perform, or share their own views about the project and the history it was based on. The group Grocott’s Mail saw had very different views to share about the war, and Makhanda and the British.

Some said the British were very brave. Some interpreted Makhanda’s prophesy that water would come out of the British guns as his encouragement to them not to give up the fight.