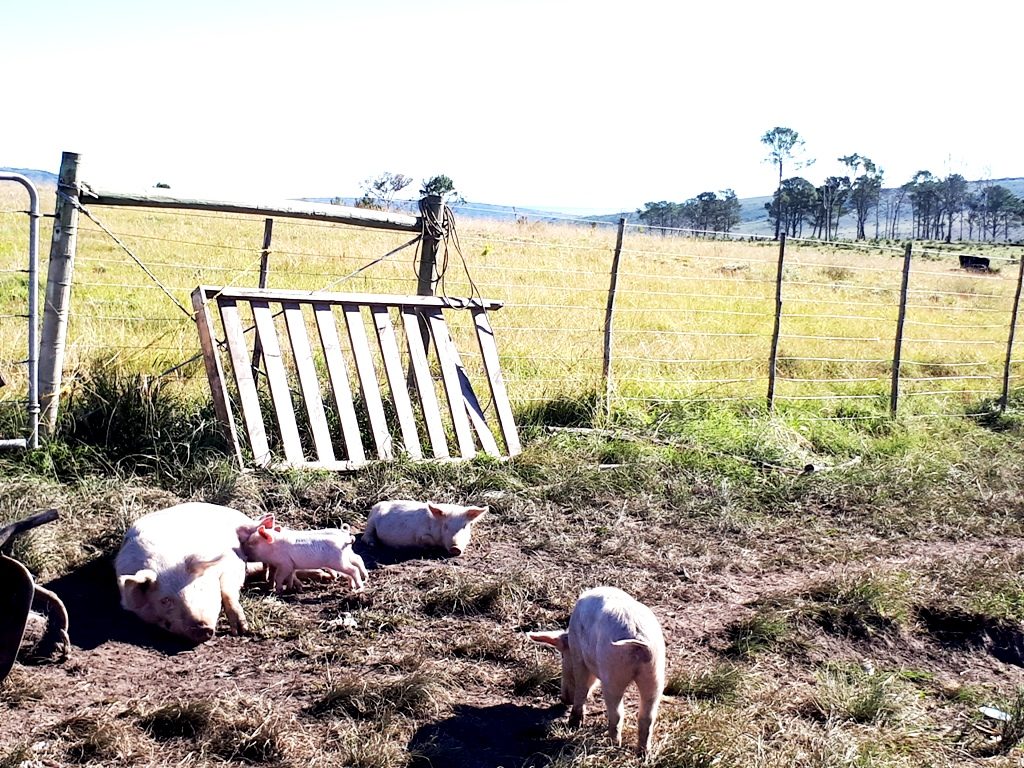 Permaculture farmer Edward Gaybba lost a sow and four piglets last Saturday night. He's not certain what attacked the sow and took the piglets. Here, a surrogate suckles the remaining piglets in the litter (Sunday 27 May). Photo: Sue Maclennan

More than a week after a spotted hyena was seen ambling across the Highlands road, small-scale farmers in the area west of Grahamstown are frustrated at the slow progress in tracking down and capturing the protected predator.

The drama began when small-scale farmers Shane and Sunell Lockwood were returning to their smallholding around 9pm on Saturday night.

“We crossed the railway line and as we started turning into the left-hand bend, we saw something in the bush on the right,” Shane said.

Shane, who was driving, slowed right down and then came to a stunned halt, as a spotted hyena walked into the full beam of their headlights, then stopped and looked at them before disappearing into the bush on the south side of the road.

“I could see it as clear as daylight,” Shane told Grocott’s Mail afterwards. “It was as if I was watching National Geographic.

“It was a spotted hyena,” he emphasised. “Not a brown hyena, and not an aardvark.”

He stressed the point because, he said, staff from the neighbouring Pumba reserve and conservation staff had initially expressed doubt at his account – something he and neighbour, permaculture farmer Ed Gaybba, found frustrating.

Sunell scrambled for her phone to take a photograph of the creature – but by the time she’d got it out and unlocked the screen, it was already partly obscured by bushes.

“They initially thought it had captured on of my lighter coloured goats,” Gaybba said. “They came to wake us and explained exactly what they saw and where.”

Gaybba, who keeps pigs, said he had lost a sow and four piglets that night. “I cannot say definitively whether it was this hyena that took my piglets, but I am four piglets short since that night with no bodies to show for it,” he said. “The remaining seven piglets were successfully adopted by one of our other sows.”

Of the sow, Gaybba said, “We only found marks and blood on her neck and face. Unfortunately there’s no way I would be able to verify that it was the hyena.”

Attempts to contact conservation officials and the Pumba followed the next day. A team coming last Monday to the place where the animal was sighted said they could find no spoor there.

“They wouldn’t,” Lockwood said, “because it poured with rain on Sunday afternoon (20 May) and anything in the road would have been washed away.”

Subregion manager for the Department of Environmental Affairs Quintus Hahndiek confirmed the sighting had been reported and said a permit had been issued for the animal to be tracked and trapped.

“I have spoken to the reserves in the area and they are all co-operating to track down the animal,” Hahndiek said.

Asked whether a hyena on the loose, should there prove to be one, would be dangerous to humans, Hahndiek said it would be no more dangerous than the leopards occasionally found in the area.

“When any animal escapes the reserves work together very quickly to recapture it, because it’s in all of their interest.”

Also working on the case is SPCA manager Mark Thomas.

“While wildlife falls within the jurisdiction of conservation authorities, our role is to ensure no harm comes to the animal,” Thomas said.

“We will work alongside farmers and conservation officials to capture it.”

“It’s very important that people don’t try and take this into their own hands,” Thomas said. “Besides the consequences for the animal, it is a protected species and the laws are very clear. There are severe penalties for transgressing them.”

The farmers say while they want to work with conservation and reserve officials, they’re frustrated that it’s taken so long to act, and that there’s been little communication to update them on progress.

Lockwood said, “I’m concerned about their safety. Livestock can be replaced but a child’s life can’t be.

He can’t understand why the matter appears not to have been treated with the urgency he believes it deserves.

“Had they responded on Sunday, they might have been able to track it. The reserve should have been more proactive.”

As for the reserve’s initial skepticism at the sighting, Lockwood said, “I have nothing to gain from this. This is a predator, not a pet. Let’s deal with this before something happens.”

This is a predator, not a pet. Let’s deal with this before something happens.

Gaybba said, “I need to stress that the loss of the piglets cannot be compared to the gain of capturing such a rare animal alive.”

“As a permaculture practitioner my work is rooted in positivism. While I am a little concerned about the welfare and safety of my family and livestock, I do believe we should all do our utmost best to work together to help bring this story to a happy ending for all.”

On their Whatsapp group, Highlands Road smallholders and farmers agreed on a statement which is as follows: “The farming community on Highlands Rd respects the rights of this animal and will do all we can to support the responsible parties in humanely capturing and relocating it to a place of safety.”

Pumba Private Game Reserve had not yet responded to Grocott’s Mail request for comment at the time of publishing. We will amend this article to include it when we receive it.

“Spotted hyena are endemic to the area and were never entirely eradicated by the farming community, as is the case with brown hyena, says subregion manager for the Department of Environmental Affairs Quintus Hahndiek. He was responding to Grocott’s Mail’s inquiry about where such an animal might come from.

“Permits were issued to three private game reserves to keep spotted hyena in the area administered by the Grahamstown Offices,” Hahndiek said. “One of the reserves has removed all its spotted hyena and there are therefore now only two reserves with permits. All introductions of spotted hyena were made before 2008.

“The permits only specify the number of animals they wished to introduce at the time, and present numbers are unknown. Control of numbers on these properties would be regulated on an ecological basis, bearing in mind the impact on prey species on these properties and visibility to tourists.”

Hahndiek said any form of removal would be subject to a Threatened or Protected Species (TOPS) regulation promulgated under the National Environmental Biodiversity Act of 10 of 2004.