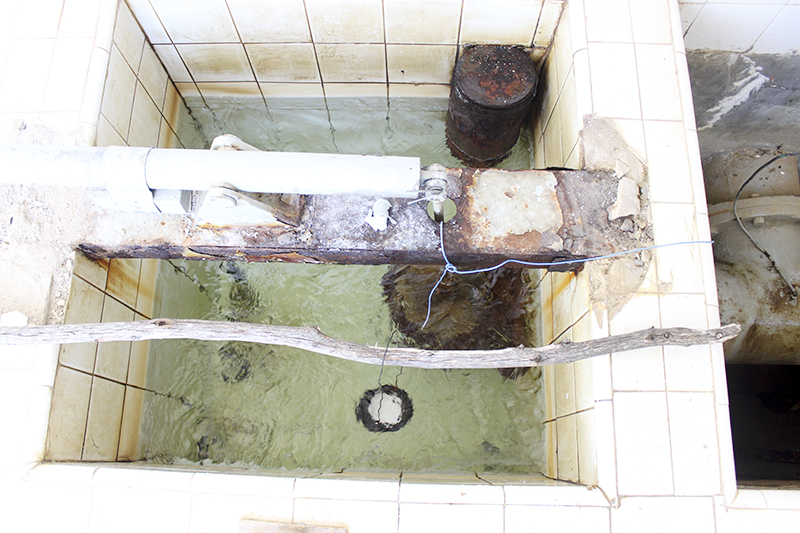 Chlorine tablets suspended in a channel at Waainek Water Treatment Works. Staff said they’d had to make a plan with the resources they had. By 2pm Friday 25 May, water from Grahamstown and Alicedale taps should be safe to drink, say officials. This follows intervention from national government ensuring the correct chemicals were delivered yesterday to Makana’s water treatment plants. But there has been widespread outrage over the municipality’s breach in its duty to supply safe water to residents, with calls for accountability and stronger oversight of the essential service.

On Monday, Makana issued a notice to residents, advising them to boil municipal water as a precaution, due to high concentrations of bacteria, including e.coli. A notice dated Monday 21 May warned residents of Grahamstown and Alicedale of a high concentration of e.coli in municipal water. The bacterium is found in the faeces of animals and humans. The SANS standard for e.coli is zero. SANS 241:15 is the Drinking Water Standard that lists determinands and corresponding limits that must be measured to determine that the quality of water is safe for people to drink.

A municipal official raised the alarm last week, revealing that swimming pool tablets were being used to chlorinate Makana’s water supplies. This followed a question from a councillor about high levels of e.coli reported in water result tests tabled at the social development portfolio meeting on Wednesday 16 May.

Health and Cleansing Manager Johann Esterhuizen explained the correct chlorination procedure to councillors and said, “What we are giving the community is not right and we are going to have major problems.”

Esterhuizen, whose department conducts internal quality control tests on municipal water, admitted, however, that water leaving the treatment plants last week was within the safety limits according to current tests.

Meanwhile, a local business that uses an independent laboratory to test its water received results from Grahamstown tap water showing coliforms at 10 cfu/100ml (the SANS 241 standard is <10), e.coli at 8 (SANS 241 standard is 0) and total microbial activity at 4100 (SANS <1000).

The tests were conducted on water coming out of taps at Carara Agro Processing on 7 May. The factory, which exports locally produced and processed produce across the world, has invested R1.4 million in special infrastructure to ensure a continuous supply of water to the factory floor that meets international safety standards.

There was wide concern when Amatola Water ended their operations in Makana at the end of August and the cash-strapped municipality had two weeks to buy essential chemicals to treat water supplies to Grahamstown, Alicedale and Riebeeck East.

Amatola was contracted to manage Makana’s bulk water supply, ensuring treated water to the three centres They withdrew their services as a result of a R40 million unserviced debt.

Amatola was also the implementer of the crucial R98 million upgrade of the James Kleynhans water treatment works, for which funding was received from the Eastern Cape Development Corporation. A funding agreement saw the Corporation funding the service until 31 August 2015. The contract was to finish on 30 September 2018.

In an article published by Grocott’s Mail on 12 September 2017, Makana Municipality said it had the supply of chemicals in hand, and that the institution was ready to take over operations from Amatola. (bit.ly/GrocAmatola)

Civic organisation the Grahamstown Residents Association said the priority was to ensure the correct water treatment supplies arrived so residents could be assured municipal water was safe to drink and compliant with SANS 0241.

“Once that’s done and we see test results to confirm the water is clear of pollutants, GRA aims to engage with Makana to agree measures which ensure this cannot happen again,” GRA Secretary Tim Bull said.

“Further down the line we must also ask questions about accountability, because it’s clear Makana staff knew there was a problem long before they informed the public.  This isn’t just a complaint: the supply of safe drinking water is the responsibility of any municipality as the local Water Service Authority, and failures to do so are notifiable under legislation.”

Bull said the Association had written a letter to authorities which had been forwarded to the departments of Co-operative Governance and Water and Sanitation to highlight the need for a water engineer to be urgently seconded.

Public service watchdog, the Public Service Accountability Monitor, said the municipality had failed in its mandate in terms of the Municipal Systems Act.

Research Head at PSAM Zukiswa Kota said, “Section 4, on the rights and duties of municipal councils, explicitly says that a municipal council alongside other organs of state must contribute to the progressive realisation of fundamental rights contained in the Constitution – in this case, Section 24, which speaks to the right to a healthy environment.

“In what the Municipal Systems Act requires in terms of the functions and roles of a municipality, Makana is failing the residents of Grahamstown,” Kota said.

“This is a completely inadequate justification. There should be mechanisms in place to prevent such issues, especially when it seems that these supply chain problems are as common as they are in the Eastern Cape. By blaming failures on supply chain problems government officials skirt accountability,” Sulter said.

“Municipalities (or any government institution) should never find themselves in a position where they run out of supplies which are vital in ensuring the health and safety of their residents.”

Kota asked: “Who is monitoring water sources? What reporting and oversight procedures are currently in place for water services? What happens to oversight reports? What happens when quality testing results come out?

She said according to the roles and functions of the municipality, the Council in particular, it was essential for Makana to be responsive to the public and communicate clearly and promptly when there was a concern. They should provide information about any risks, in this case, gastro-intestinal illness.

“PSAM welcomes the role of the portfolio committee process that highlighted this as a problem,” Kota said. “This is precisely what oversight should do.

“But was communication of the information delayed? Above all, it’s about accountability and ensuring people are made aware of their rights, particularly in Section 24 of the  Constitution.”

The DA said they would be tabling a Motion of Question, a mechanism to hold officials accountable by requiring a written reply to questions.

In a media release, the party expressed strong concern at the chain of incidents.

“The DA is alarmed that these developments, which are currently being assumed to a management and planning issue or a Supply Chain issue, are being allowed to jeopardise the health of our residents,” said the statement, signed by Councillor Brian Fargher, Chief Whip of the DA in Makana. “The very young, the old and the sickly are especially at risk.”

The DA would now table Motions of Question as follows:
1) At what point did the recent crisis occur – running out of Chlorine gas or liquid?
2) The date at which the Department of Water Affairs was notified of the breach of water quality regulations?
3) A tabling of test results of the free Chlorine levels that the Water Department assured us had been taken in the reservoirs. They assured us this had been done in the Social Development meeting. We demand a thorough investigation of this situation and staff be held accountable where negligence is found.

“Further to this, the DA with be escalating the matter by appraising the Shadow Minister of Water Affairs of the situation in Makana,” Fargher said.

WHAT DID THE MUNICIPALITY DO? * The chemicals were delivered to the respective plants at 2pm Thursday.

* It would take 24 hours, counting from 2pm Thursday, for correctly treated water to begin flowing through residents’ taps

* The correct chemicals as received [Thursday] were in use at the plants, therefore there wouldn’t be any [future]health risks to the residents.

* To prevent future incidents of this nature, procurement of chemicals for water treatment would be done a long time before stock ran out and would be prioritised by the municipality’s Supply Chain Management Unit.

Upgrades are well under way at James Kleynhans Water Treatment Works that will improve both the quality and the quantity of the supply. These are due for completion in July. At Waainek, the electrical upgrade has begun and a new pump control panel is already in operation. Grocott’s Mail saw the work in progress and will report on it in a coming edition.

DID ANYONE GET SICK FROM THE WATER?

Grocott’s Mail has heard second- and third-hand unconfirmed reports of large numbers of residents suffering gastro-intestinal disorders, particularly in the first week of May. We have not been able to verify the reports first hand, and it would require proper investigation to establish a link between incorrectly treated water and such incidents.

Practitioners employed locally by the Department of Health are obliged to redirect journalists’ questions to provincial spokesperson Sizwe Kupelo. Grocott’s Mail yesterday asked Kupelo to confirm that an unusually high number of gastro-enteric cases were seen at clinics in Grahamstown at the beginning of May.

Last night he replied, saying a total of 66 cases were seen and all treated in clinics.

“No cases were referred to a hospital. All were treated at primary health care level with no shortage of medicines,” Kupelo said. “Water has been found to be contaminated – get details from the municipality.”

The first set of tests, which are low-tech and low-cost, are based on the reaction of water samples to hydrogen sulphide.

Test co-ordinator Nikki Kohly, who is Rhodes University’s Safety, Health and Environment Officer, said bacteria of any sort (not just e.coli) reacted with the chemical, causing the liquid to darken. More darkening of the liquid indicates a higher level of baceteria.

The point of the testing, Kohly said, was to indicate whether more detailed laboratory testing should be done. These more costly tests would be conducted by researchers in the Environmental Health and Biotechnology Research Group in the Faculty of Pharmacy.

The initial test had indicated high bacterial content in water from Caroline Close, above the Albany Sports Fields, Somerset Street and Constitution Street. Samples from Cotterill Street were less discoloured.