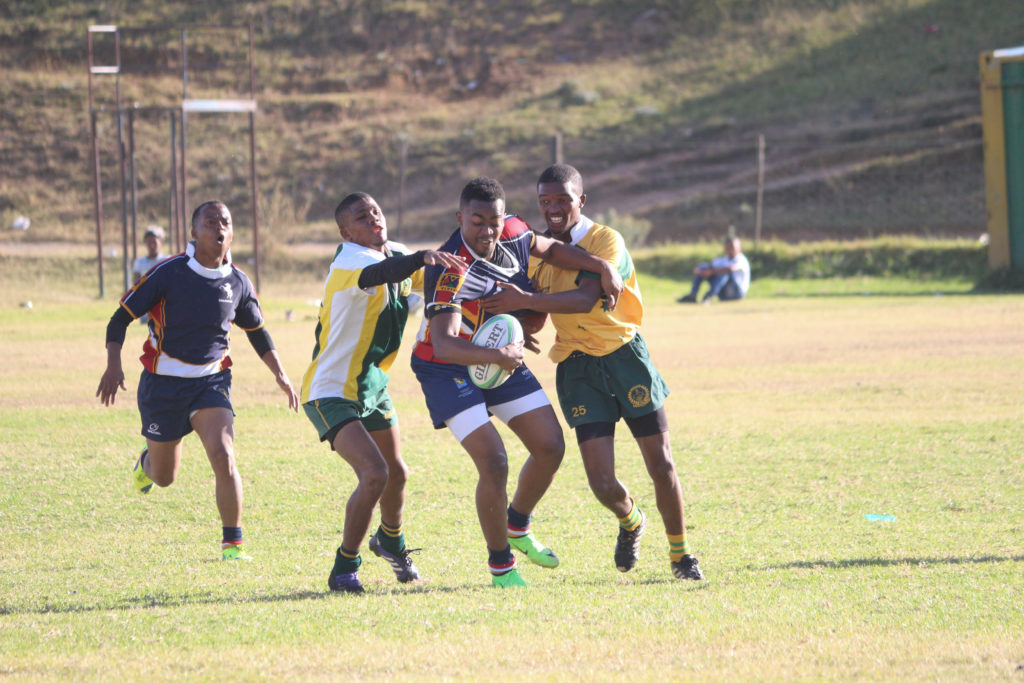 Alvino Williams from the Brumbies First Reserve team battles his way out of the Suburbans defense line before scoring a try Photo: Percy Brooks

The Brumbies Rugby teams were scheduled to play against Suburban’s from Port Elizabeth back on their home turf as part of the Grand Challenge Cup Competition on Saturday 19 May. The matches started at 1pm and it was a perfect mild summer day in Grahamstown for Rugby. The Brumbies Second Team, First Reserves and the First Team were supposed to play but, due to unfortunate circumstances, the main match of the day was cancelled at the last minute.

Next up was the Brumbies First Reserve team who, gave the crowd an exciting playoff against Suburbans. Both teams showed off some impressive ball skills in a highly competitive match. Just like in the earlier match, the Brumbies side took the lead by five points at half time with a score of 10-5. The Suburbans did not let the Brumbies lead get them down, instead going on to triple their points. The dying minutes of the second half witnessed Shanton Whitebooi fly through the opposition’s defense to dot down the winning try. The Brumbies managed to turn out 22-15 victors over the visitors.

The crowd waited anxiously for the First Teams to kick pff the main event, but to their disappointment, only saw the teams run onto the field and then walk off about 10-15 minutes later. According to the referees, the visiting team had decided not to play anymore because the field was not “playable” for them. The Brumbies First Team coach later revealed the necessary medical equipment arrived a few minutes late with the ambulance. After much conversation and debate about whether the main event was going to take place, the crowd left the Oval disappointed, along with the players, who looked forward to playing on their home turf.

The Eastern Province Rugby Union (EPRU), which is responsible for the Grand Challenge Cup, would have to review the day to determine the allocation of points for the day, according to match day officials.