Building is in their blood 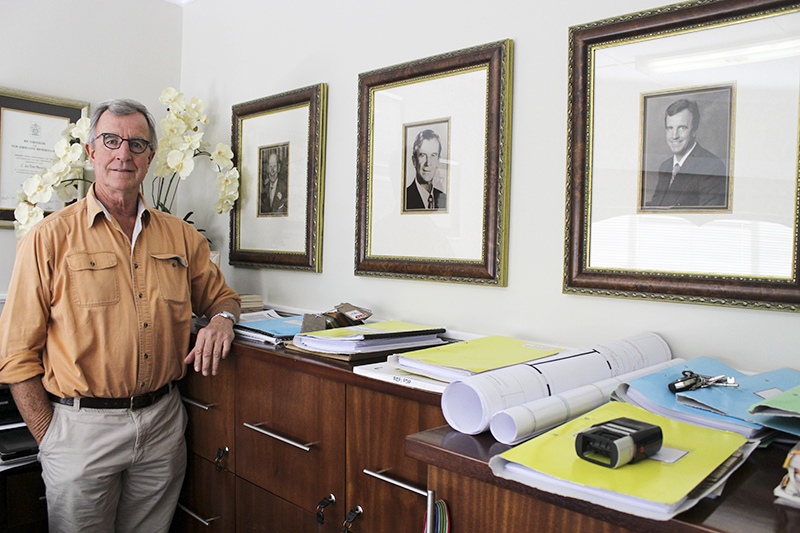 From state-of-the-art Ntsika High School to the Design and Technology Centre at St Andrew’s College; from the restoration of the Guy Butler Theatre at the Monument in just over six months after it was gutted by fire, to Rhodes University’s Eden Grove, CM Heunis construction company has done it all.

The company, founded in 1938, is in its 80th year. At a recent function to mark the occasion, third-generation captain at the helm, Neels Heunis, gave a hint of  the fascinating social dynamics of Grahamstown while revealing just how much of the town’s landscape we take for granted is part of the CM Heunis legacy.

Oupa Heunis – Cornelius Marthinus Heunis – grew up as a was a woodcutter in the Knysna forests, before he met Englishwoman Edith Julian and moved to Alexandria with her in 1910 to work in Alexandria. Cornelius was a bywoner on the farm Sans-Souci in the Alexandria district. That’s where their six children – three boys and three girls – were born.

They all attended Alexandria Secondary School, except Bobby, Neels’s uncle, who left to learn the carpentry trade. He joined the Public Works Department and later became a senior building inspector.

Bobby and Oupa knew how to build – but they had no administration skills, so they called on Neels’s dad Cornelius Christian Heunis to come and help. He moved to Grahamstiown and it wasn’t long before the two brothers realised they couldn’t work with Oupa. So they set him up with a nice place at Bushman’s River Mouth and a promise that they would take care of him…as long as he remained a silent partner!

But Grahamstown – well – it was English, with a well established English building community: the Owsley, Charlton, Mortimer and Gill families. The Heunis brothers were Afrikaans.

Their breakthrough came in 1950 when liquor retail entrepreneur Benny Goldberg hired them to build the Graham Hotel in High Street.

That was the year Neels was born in the sanatorium at Rhodes University.

Heunis’s next big contract was Celeste Flats: by that time they had enough capital to buy a vertical hoist to lift concrete three stories high. A new block at Fort England, the municipal house next to the fire station as well as the old age home there, the municipal houses on Sugar Loaf Hill followed. So did PJ Olivier Primary – where they lost money because they didn’t know how hard the natural stone on the site was.

Jan Vogel joined them as a learner carpenter and stayed with the company for 45 years; first as Bobby’s carpentry apprentice, and subsequently as Neels’s business partner.

Work continued through the 1960s, when Somerset Heights was developed and triggered a boom in the housing market. Extensions at St Andrew’s, Kingswood and Mary Waters, Settlers Museum, Rhodes University’s Botany and Zoology and the four-storey Smuts House were built.

“The roaring 60s were most likely CMH’s most productive years,” Neels says.

During that period, CM Heunis started their own property portfolio, constructing Sans Souci flats in Huntley Street, and Edith flats in Glanville Street – both names having strong family connections.

Neels himself learned the trade hands-on, he says.

“I can remember these years because I would join my dad on Friday afternoons when he visited all the sites to pay the workmen,” Neels recalls.

“When I was 13 and older, I worked on various sites as a handlanger – pushing wheelbarrows, mixing concrete, doing carpentry and fixing reinforcing.

“It was in our blood,” he says. “I was given a pay packet on a Friday afternoon, along with the other workers.”

CM Heunis’s policy was to train apprentices. In the evenings, they attended the Technical College – where Kingswood Music School now stands. After four years of theory and practicals, apprentices were sent to Olifantsfontein for their trade test.

“If they failed, they had to come back and try again a year later,” Neels says. “They each received a training ticket and today we regard them as “A”-rated artisans.”

In the 1970s the industry went into a recession in Grahamstown,.

During those years, CM Heunis got contracts to build Rhodes University’s theatre complex, the Pharmacy building, as well as for the conversion of the former Teachers’ Training College to the new Law and Education building.

Neels matriculated at PJ Olivier in 1968 and in 1970 enrolled at the University of the Free State to study Quantity Surveying. He joined his family in Grahamstown in 1979. Contracts included the fir restoration of the Observatory Museum, restoration of the Old Provost, the conversion of Federated Tibersin Hill Street to Maritime Motors and the conversion of a garage building in Hill Street into The Colcade.

The construction of Somerset Place began in 1986 – with three phases completed later.

During lean periods, CM Heunis would continue doing their own developments, and Heunspan Flats, Heunishof and Uit & Tuis flats were built.

“For years we couldn’t make inroads at DSG,” Neels says. But in 1988 we won the tender for the new admin block and I don’t think one year has passed where we have not been involved in some work.”

“In 1985 my uncle Bobby Heunis started his own company in opposition to us: sad in a way, but in the long run, a blessing.”

In 1990, the two brothers also split their property portfolio.

Two of their most creatively rewarding projects were Ntsika Secondary school and the Design and Technology Centre at St Andrew’s College – both of which Neels describes as state-of-the-art for their purposes.

The story of the fire at the Monument Theatre bears telling.

“On a misty Saturday in August/September 1994, we drove to PE. As we were driving past the Monument, we heard it had been gutted by fire.”

That evening, Neels received a call asking him if they could start cleaning up that Monday morning.

“I asked him to give me some time to think,” Neels says. Three days later, they were starting the job on a cost-plus basis.

“The devastation was overwhelming – and where do you start?”

But – “Ons skrik vir niks,” Neels says. Their work included lifting slabs, rebuilding the roof and spray cleaning the walls, all with the aim of making it ready to accommodate the Festival by July 1995.

Another post-fire reconstruction they undertook was Oxford Furnishers.

The SAIAB building in Somerset Street, the upgrading of hostels at St Andrew’s College, residences and additions to the library at Rhodes University are among their more recent projects. “We normally pump 50 cubic metres of concrete a day,” Neels says. “Here we were pumping up to 180 a day at a cost of R2000 per cubic metre.”

One of the most challenging projects was the Eden Grove complex at Rhodes University, put out to tender in 1998.

“This is the most complex structure that I have been involved in to date,” says Neels. “It was the first time that we worked with post tensioned concrete slabs. The roof with its wings was so complex that the architects constructed a model so we could understand the drawings.”

The building was an important statement for the university at the millennium, championed by vice-principal at the time, Mike Smout.

In 1999 the company formed a new branch in Port Alfred to service the growing need for multi-million luxury homes in Kenton-on-Sea, Bushman’s River area and the Port Alfred Marina development.

“Grahamstown has supported us since 1940,” Neels said to the gathering at the 80-year celebrations, expressing the hope that CM Heunis would survive and continue to grow with the town.

The business stayed in the family for three generations, covering a span of 79 years, until Neels decided to sell the company and begin his journey into retirement. The business was purchased with effect on 1 September 2016 by long-serving colleagues Brian Knight and Hain Ackerman.  Neels has stayed on as Financial Manager and Consultant, as well as a Non-Executive Member of the company.  He will be slowly withdrawing over the next few years as he retires fully.