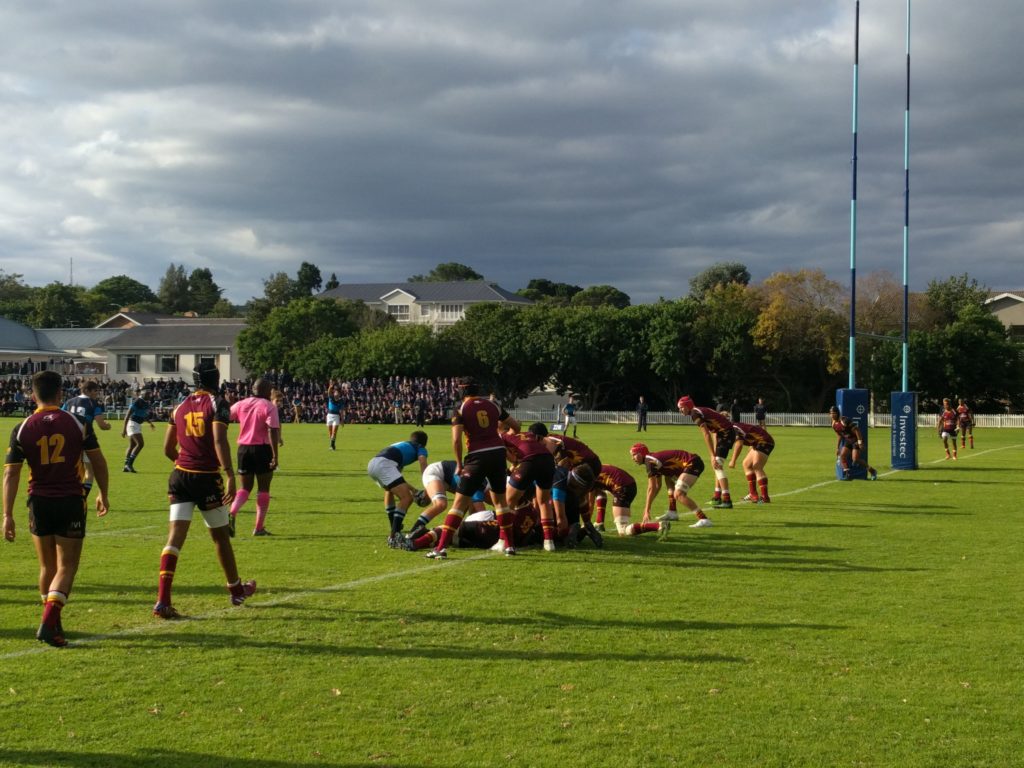 St Andrew’s College played host to HTS Daniel Pienaar on Saturday 12 May on their Lower Field. It was an eagerly anticipated game with two good sides against each other. The crowd was characteristically loud and the bag-pipes set the tone.

Prior to kick off, with both teams out on the field, Daniel Pienaar performed an age old tradition – “die Kreet”, which is their pre-game war cry, in a Haka-like style, meant to intimidate the opposition.

Just after kick off, Daniel Pienaar mounted serious pressure on the hosts, after kicking off and quickly regaining possession. SAC’s defense crumbled after eight minutes of hard hitting attacking play from the visitors, who scored the first try of the game and slotted the conversion. SAC wasted no time in retaliating, with Chris Poole bursting over the line with a good team effort to drive up field. The conversion was no good, and the hosts remained behind. Eventually, 21 minutes into the first half, Bame Malesu got the ball and ran in under the posts, putting SAC ahead. Ryan Thompson extended the lead with the conversion.

With six minutes left to play in the half, Ant Moore gained possession of the ball and went over the line for SAC’s third try. Thompson made a well-taken conversion to lead by twelve points. St Andrews took advantage of their momentum with only one minute left in the first half. Will McAdam scored in the corner for the hosts’ fourth try of the afternoon and after the conversion was made, the hosts went into the break 26-7 leaders.

Moore got his second try of the afternoon straight after the kick-off. The remainder of the half saw a lot of back and forth play, but no change in score. The hosts eventually managed to extended their lead through two late tries in the last five minutes against a 14 man Daniel Pienaar side. They had lost a player through a red card, for an unnecessary tackle on a player out of frustration. The final whistle went and St Andrew’s maintained their unbeaten season.

St Andrew’s coach, Andy Royle, pointed out post-match that “continuity from a good season last year has flowed into the side’s performance this season, with many positive and negative aspects picked up throughout the season so far.”