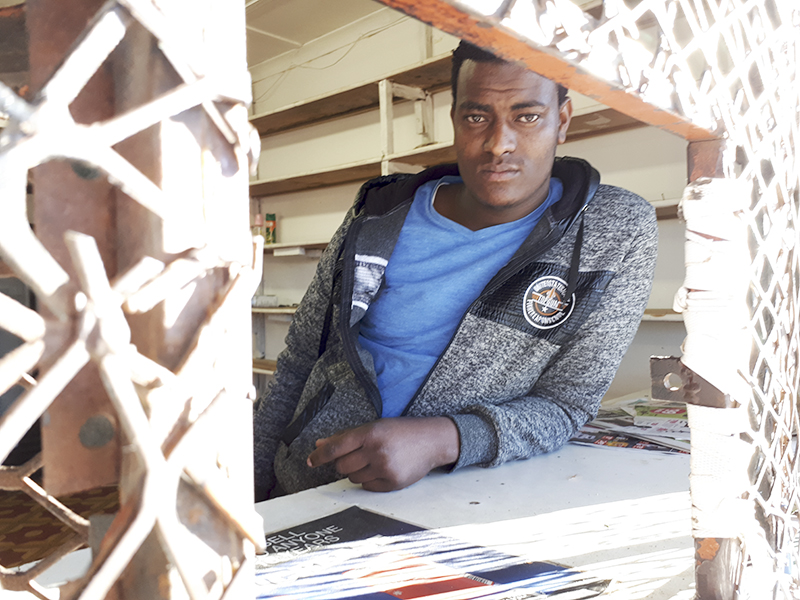 Getahun Hazlu looks out from behind the metal grille of his Extension 6 shop Tuesday 15 May 2018, the shelves emptied of stock in anticipation of a rumoured protest. 'When is this thing going to be right?' he asked. Photo: Sue Maclennan

Several Grahamstown shopkeepers moved the bulk of their stock to safe storage and others closed their doors yesterday as false rumours of a taxi protest flew around the town.

Yesterday Grocott’s Mail visited several spaza shops in Extensions 6 and 7 affected by looting on 24 April. That day saw civic organisations join hands with local branches of the taxi associations in a service delivery protest. While community leaders and Makana Council representatives addressed a large crowd outside the City Hall, criminals targeted immigrant-owned spaza shops, breaking into them and stealing goods. Some residents, and later on children returning from school, took advantage of the chaos to help themselves.

At the 24 April protest the Council’s Petitions Committee, comprising Speaker Yandiswa Vara, Acting Municipal Manager Ted Pillay and Corporate Services Director Nomthandazo Mazwai received a list of demands that included concerns about the state of Makana’s roads, dumping, water outages and poor conditions at the taxi ranks. The combined civic grouping, signing off as the Makana Civic Movement, gave the Council 21 days to respond. Yesterday, 15 May, was that deadline and this appeared to be what sparked the expectation that the day might see more protest action.

Both Uncedo and Border Alliance taxi associations have strongly condemned and dissociated themselves from the criminal looting on 24 April, as did the civic and political organisations who participated in the march to the City Hall.

But the perception persists among community members that the looting is done alongside actions by the taxi industry. This is because the first incident of xenophobic looting occurred on 20 October 2015, the day on which taxi drivers drove through the city to protest the poor condition of Grahamstown’s roads. There have been several protests since. The 24 April 2018 protest was the first since then involving the taxi industry, and it was the first since 20 October 2015 during which looters targeted immigrant shops on the same day.

Yesterday morning Uncedo Taxi Association Chairperson Monde Sandi confirmed no protest action was being planned by the taxi industry. “There is no strike,” he told Grocott’s Mail early on Tuesday 15 May.

“We [the executive leadership of the taxi associations]went to the municipality yesterday,” Sandi told Grocott’s Mail. “The meeting didn’t finish and they’ve asked us to come back on Wednesday.”

Only the executive leadership of the taxi associations would attend this, however. “It will not be a strike,” he said.

Asked to comment on perceptions that the looting in October 2015 and 24 April 2018 had been associated with the taxi protest action, Monde said ahead of the 24 April protest, shopkeepers had been advised to close their businesses for the day.

“We said they should close their shops that day,” Sandi said. He said the shops that had remained open were those robbed.

The consensus is that the looting is initiated by experienced criminals, with some community members then taking advantage of the situation to raid shops further.

At a meeting of shop owners on 25 April Muhammad ‘Roni’ Masum called for residents to support the shopkeepers against criminals. “We cannot be defeated by a handful of tsotsis. This is a five-tsotsi zone: there are a few of them and hundreds of us!” Masum said, referring to the communities around the shops.

Yesterday shopkeepers watched anxiously from behind the metal grilles of their shopfronts, the shelves behind them emptied of stock.

“Sorry, we are closed,” they told residents who stopped to buy groceries or airtime.

At one shop a taxi stopped and the conductor jumped out to buy a single loose cigarette – one of the small, fast-selling items that remained in the shop.

“They are just disturbing the foreigners now and then,” said Getahun Hazlu who employs a private security company to watch his back. His shop is in Sani Street close to the derelict Benjamin Mahlasela Secondary School.

“They’ve been saying for two days now there will be a strike. While this is going on I just have to stand here and wait. I can’t eat or anything. When is this thing going to be all right?

Moosa Asbah at Gatyeni General Dealer in Extension 7 said they’d been warned to remove their stock the night before because of the strike rumours.

The police said they were aware of the rumours, but said the advice to shopkeepers to remove their stock had not come from them.

“The shop owners were uneasy [because of the rumours]but no notice was given from SAPS,” police spokesperson Captain Mali Govender said. No incidents of looting had been reported yesterday and there had also been no protest action.

Grocott’s Mail called several shop owners last night who confirmed there had been no incidents.

A delegation from SAPS along with municipal officials and civic organisations met yesterday with representatives of the taxi industry including Uncedo and Border Alliance taxi associations. Uncedo chairperson Monde Sandi confirmed this was a scheduled monthly Transport Forum meeting convened by the municipality and did not relate to any past or planned protest action.

According to a source who attended the meeting, the brief agenda included road humps in M Street, the overall state of Grahamstown’s roads and hitch-hiking spots in Beaufort Street and George Street.