Tough and rewarding: The story of single mothers

Single mothers agree that being a parent is a tough, but rewarding job

It’s not about the latest Jordans. It’s about spending time together.

Some single South Side moms who’ve been meeting lately say time is what their kids need from a dad, not a gift. And time with the kids buys time for the mothers, too.

“Just spend time with her ᾿cause she doesn’t know who’s buying her sneakers or who’s putting dinner on the table,” said Naja Pitts, a single mother who recently was part of a panel with other single mothers at Syracuse Community Connections, formerly Southwest Community Center.

“She just wants memories. Ten years from now, she can’t wear those same sneakers that you just bought. It’s more so, she’s gonna have those memories for the rest of her life.” 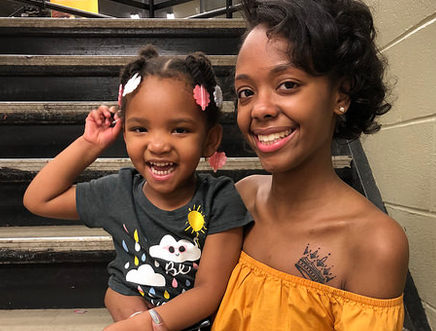 Anthony Pitts, who is Naja’s father and the coordinator for the Healthy Start Fatherhood program based at the center, works with single fathers, helping them find support and resources. He invited single mothers to a panel held at the center to learn more about their needs so he could communicate it to the group of fathers. Pitts reached out to Naja and a few other single mothers to be part of it and to invite other women they know. Since then, they have met three times and hope to meet every month moving forward.

“When my dad first asked me to do it, I personally was going to support him but I didn’t think I was going to say much,” Naja said with a laugh.

“I would not open up to everybody about how I’m a single mom, but I feel like once that conversation got rolling, I really enjoyed it.”

For the first session when Anthony met with the single mothers, Naja said he had five questions, but they got through only one “because everyone got so deep into it.”

She explained, “As a mom, you just learn to do it yourself. I don’t even think it’s a pride thing, it’s just more so like, ‘This is my kid, and I’m going to do whatever to make sure that they’re straight.’ So after a while, I just want you to spend time and be there for the kid.”

The women have a routine and schedule, but the challenges still arise.

“Most mothers are really looking for time because being a single mother is about the grocery store, running to the corner store, just getting gas,” said Myesha Britt, one of the mothers who was part of the discussion. “I gotta tie your shoe and his shoe? It’s just constant. It’s just always something.”

According to the Statistical Atlas, which uses U.S. Census Bureau data, 54.4 percent of all Syracuse households are headed by single moms — meaning they are either married with the spouse absent, divorced, never married or widowed. Just 9.4 percent of households are headed by single men. Census data indicates that nationally, this trend overwhelmingly affects African-American households: 74.3 percent of all white children under age 18 live with both parents, but the figure is just 38.7 percent for African-Americans. Even more stark: More than one in three black children in the U.S. live with unmarried mothers, compared to one in about 16 for white children.

“From a mom’s perspective, it’s not about the things,” Armstead said. “Us women, of course, we’re far more nurturing, a little more in tune to emotions, so we realize the time spent and the memories having that connection with their fathers is what’s most important. … We just have a totally different perspective on that.”

Armstead discovered five main themes, plus a few smaller ones, that were universal among the women she interviewed. The most prominent was time — not having enough time in their day to do everything they needed to do.

“The byproduct of that is the dads weren’t spending enough time,” Armstead said. “However, their (mothers’) focus is more on, ‘I just need more time to do more things. I have a hundred things to do and have time for 50.’”

Having the chance to hear other single parents share their stories made the discussion at the center feel like group therapy in a way.

“I believe it’s a good group because you actually get different opinions,” said Dekera Ogletree, a mother who participated and who works at the center.