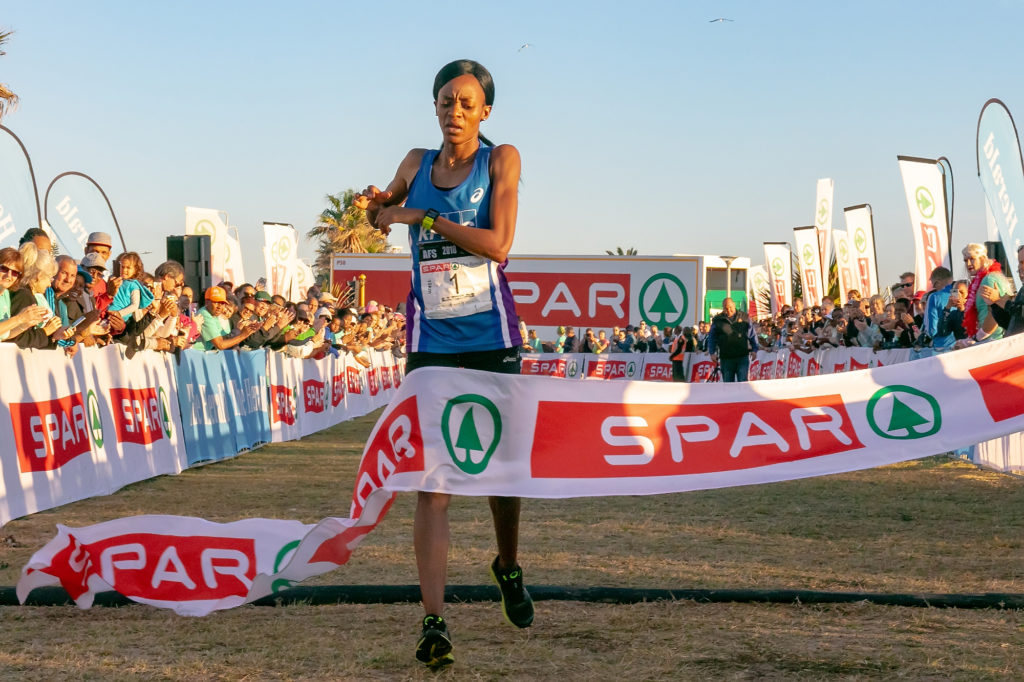 Defending champion of the SPAR Women’s 10km Challenge, Kesa Molotsane took charge of the race with just under three kilometres left to continue her domination in Port Elizabeth on Saturday 5 May.

After winning the opening event in Cape Town in March, the KPMG runner surged across the finish line in a time of 33:46 at Pollok Beach in Summerstrand to win her second consecutive PE title.

She was followed home by Glenrose Xaba (Boxer) in 34:01, with Zimbabwean Patience Murowe (Nedbank) filling third place in 34:16.

Having entered the Women’s Challenge for the first time last year, today’s victory puts Molotsane in pole position to win the overall Grand Prix Series title for the second time.

She acknowledged that it was early days and there was still a lot of work to be done as she assessed her programme for the rest of the year.

“I am hoping to qualify for the 5 000 metres at the African Championships in August, so there is quite a lot of planning to be done still,” she said.

The Bloemfontein runner has been battling with illness since the Cape Town event and added that some personal issues had almost derailed her plans for the PE event.

“The plan I had for the race did not materialise and that’s what happens sometimes,” she said. “But I was happy with the way it worked out in the end.”

With the Boxer team, featuring Xaba, well placed early in the race, Molotsane said she expected them to break away at some stage.

“When I saw that wasn’t happening I decided to go in front just past the 7km mark and managed to get ahead and hold that until the finish.”

At the media conference, Xaba said she had been suffering with a hamstring problem which hampered her pace towards the end, but was happy to settle for second place after achieving the same position in Cape Town.

Thousands of runners flooded the start venue adjacent to the Summerstrand Surf Lifesaving Club for the 10km race and the equally popular 5km event, which got under way at 8am.

The races took place in cool conditions, with a slight north-easterly blowing, but the temperature warmed as the race progressed.

As they celebrated the Challenge’s 25th anniversary, SPAR Eastern Cape sponsorship and events manager Alan Stapleton said the race continued to be a special part of their annual calendar.

“It’s our flagship event in our sponsorship programme and has grown enormously since it began in 1993,” he said.

“It was special then and it continues to be a special race which has been embraced by the women in Nelson Mandela Bay.

“It’s a great gathering of families opting for a healthy lifestyle, things which are the ethos of the SPAR philosophy.”

He added that the Challenge provided another opportunity to promote their Plastic Bag campaign, which is focused on reducing the use of plastic in society.

“We know we have made a brave statement about this issue, but this is a starting point and we want to change the mindset in our communities about the use of plastic.

“Previously we have used funds generated from the Challenge to assist various beneficiaries, but this time we will be using that to run educational programmes at schools and universities as we encourage society to assist us in cleaning up the environment.”