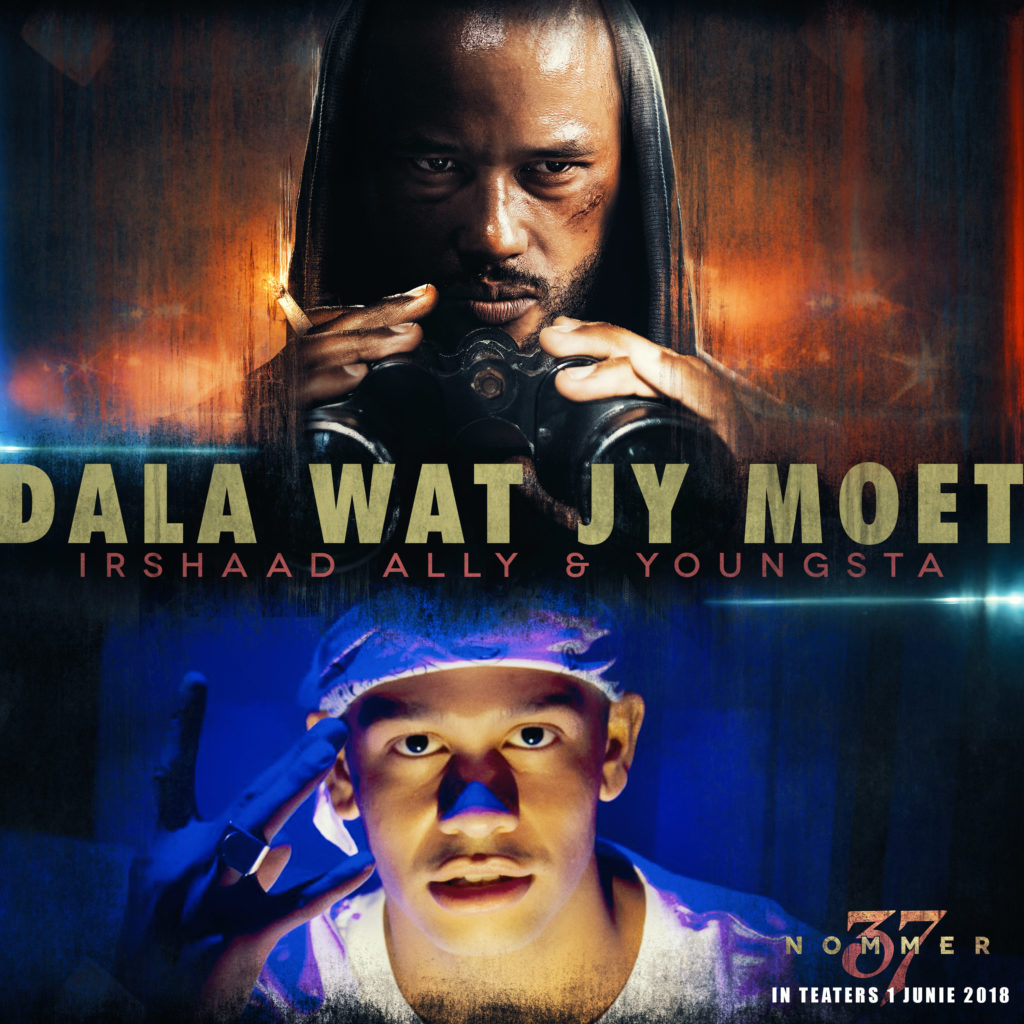 The first song from the soundtrack of the acclaimed Cape Town-set thriller, Nommer 37 (Number 37), has just been released and was created by two of South Africa’s most talented rising stars, Youngsta CPT and Irshaad Ally.

DALA WAT JY MOET is a striking rap song inspired by life on the Cape Flats. Although it has an inspiring message, it also boasts a typical gangster-like rap rhythm and a taunting repetitive chorus, which not only suits the genre of the movie perfectly but also adds to the building tension.

Listen to a teaser of the song here:  https://soundcloud.com/starburstpromotions/dwjm-teaser

“I have known Youngsta for many years. He created a song for a movie I starred in called ‘Four Corners’. I played a gangster that is idolised and glamourized by youngsters, even though this character has a bad life and dies in the end. This is actually sad and was also the inspiration behind DALA WAT JY MOET. ‘Dala’ means do and we are literally appealing to young people to do what they have to, to succeed in life and rise above their circumstances,” explains actor, Irshaad Ally, about the new single.

“Youngsta and I also have a lot in common. Both our parents are teachers. We both come from a life of being bad boys and then making it in the entertainment industry after those phases of our lives. Being involved in gangsterism taught us to be hard and, no, I’m not justifying gangsterism, but it’s our testimony,” he shared in an interview with Daily Voice. “Now we literally want to motivate youngsters with the wisdom we have and make changes on the Cape Flats to tell people, ‘listen, you have to do something with your life’.”

Irshaad, who also plays the lead role of Randal Hendricks in Nommer 37, rose to fame as a contestant on the second season of the reality show Survivor South Africa. He is best-known as Rhafiek in kykNET soap opera, Suidooster. Youngsta CPT, aka Riyadh Roberts, is a talented rapper and lyricist from the Cape. The musician, who describes his music style as 100% Cape, has delivered numerous hits, including We Go Bos, Yasis and Salutas. He not only wrote the lyrics for and created, DALA WAT JY MOET, but has also worked on various songs for other films.

NOMMER 37 is based on the SAFTA-award-winning short film of the same name, which was co-directed by Nosipho Dumisa and Travis Taute. Dumisa has since penned and directed the full feature length feature, set in Haven Mansions, a fictional block of apartments in her imagined suburb of the Cape Flats, New Haven. It tells the story of Randal Hendricks, a recent paraplegic, who is given a gift of binoculars by his devoted girlfriend, Pam (Monique Rockman). But he is in financial debt to Emmie (Danny Ross), a sadistic loan shark, and when he witnesses a powerful criminal, named Lawyer (David Manuel), commit murder while observing his neighbours through his binoculars, he initiates a blackmail scheme in an attempt to settle his debt. With deception and greed around every corner, what follows is a thrilling ride that puts both their lives in mortal danger… as the world around Randal deteriorates further and further into chaos.

The film was produced by Gambit Films in association with kykNET Films, M-Net, XYZ Films and the DTI, and will be distributed by Ster-Kinekor Entertainment locally, in cinemas across the country, on 1 June 2018, and by XYZ Films internationally. Following Nommer 37’s successful run at the acclaimed SXSW Film Festival in Austin, Dark Star Pictures recently gained exclusive rights for the North American distribution of this motion picture, which will see it in cinemas across Los Angeles and New York in the North American Autumn season.