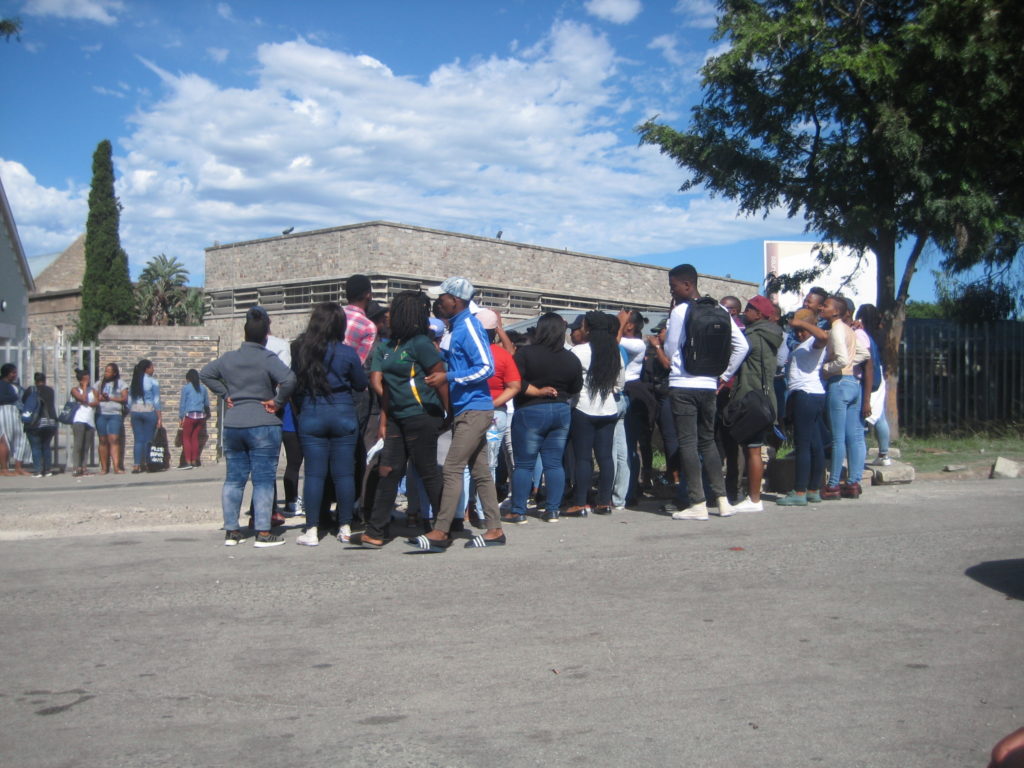 Students protest outside Eastcape Midlands College in Grahamstown. CLasses and examinations resumed this week, with a response to questions about NSFAS funding expected on Thursday. Photo: Lindani Donyeli

Classes have been back to normal at Eastcape Midlands College this week, following protests at the Grahamstown campus over discrepancies in the payment of National Student Financial Aid Scheme (NSFAS) grants. Students, who have been protesting outside the College over the past two weeks said they were expecting the College administration to communicate NSFAS’s response to their grievances on Thursday 10 May.

The student told Grocott’s Mail that late or non-payment of NSFAS grants meant students were behind in their rent to landlords. Other grievances included the claim that their courses, in particular the Hospitality course, had no practical component and the fact that the College has no student residence in Grahamstown.

Some students claimed the SRC had not been elected by the students, but had been appointed by the management and that they weren’t their representatives. Others complained there was no organised sport at the College.

While the protesters maintained a strong and vocal presence at the College gates, insisting that all classes and examinations should be halted, Grocott’s Mail also spoke to students who said they wanted to write because their parents had paid their fees.

“My parents worked very hard to put me into College,” one student who asked not to be identified told Grocott’s Mail. “They had to sell cows.”

Others said they’d worked and saved to come to the College.

“A resolution was taken that they will allow the R191 students to write internal exams. The NCV will be on a go-slow, whilst waiting for a response from NSFAS. Internal exams for R191 started on Wednesday 2 May,” said Van der Merwe.

Van der Merwe said students who had not yet received funds from NSFAS were those who had not been granted funding.

“The College made a request to NSFAS and we are waiting for a response,” Van der Merwe said. “The College has sent a delegation to NSFAS to mop up 2017 issues and enquire about 2018 funding. The delegation was made up of the Vice Principal (Finance), the Bursary Manager, MIS Manager, and SRC President.”

Feedback was initially scheduled for 4 May 2018 and students were to be informed of the responses from NSFAS on Monday 7 May; however, this was postponed to Thursday.

In response to the students’ other grievances, Van der Merwe said: