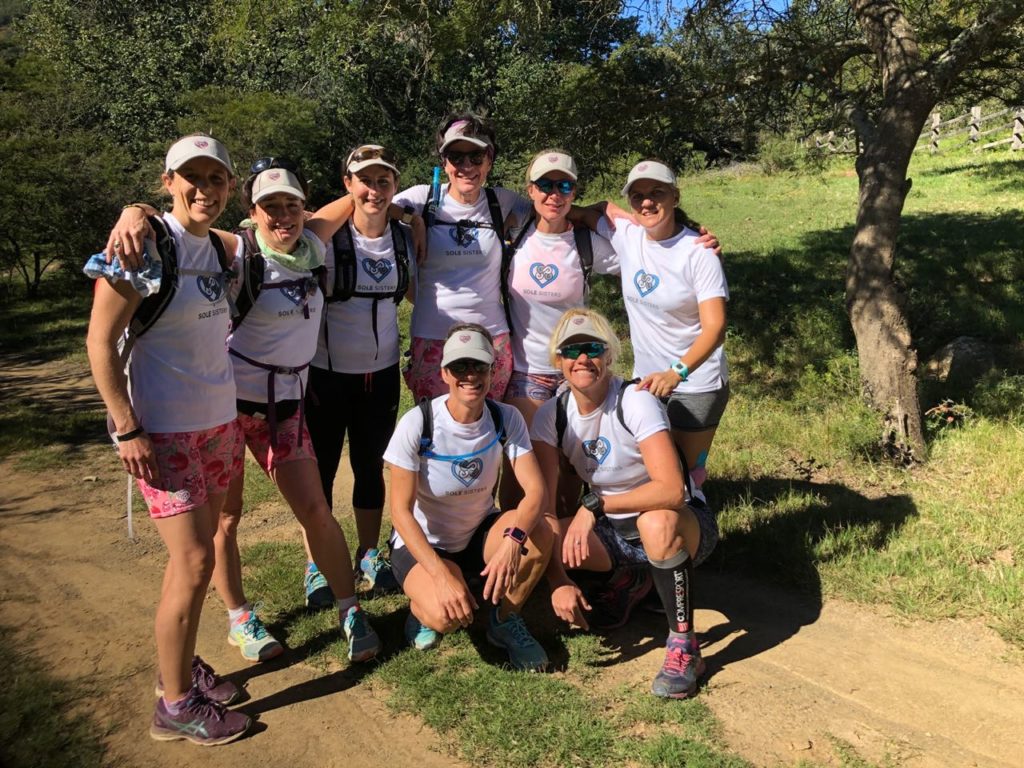 The Soul Sisters band together on the route of their 107km run between Blanco and Bedford. Photo: Supplied

By: KATHRYN CLEARY AND STEPHEN KISBEY-GREEN

The Soul Sisters running group embarked on their ambitious 107km run from 20 to 22 April. This long distance three-day trail run from Blanco to Bedford raised funds for the Lukhanyiso Village project, with the aim of earning R107 000.

This was the second year that the Sisters had embarked on this run. The 2017 edition of the Sole Sisters’ journey comprised six of the women. This year, those same women participated and were joined by three other women, including Lara Kruiskamp.

Kruiskamp has been involved in Lukhanyiso Village in Johannesburg as well as Kwazulu-Natal. The Villages house hundreds of orphaned children, supporting them through faith and education.

Kruiskamp went to school in Grahamstown, and hopes that there will soon be enough money to break ground on Grahamstown’s own Village. Land for the Village has already been purchased, following the success of Kruiskamp’s previous fundraiser where she ran seven marathons on each of the seven continents.

After the success of the Sisters’ journey, construction of the new site is scheduled to begin later this year. The Village will include 64 homes, staff accommodation, a school, sports fields, healthcare centre, as well as a trade school.

The run itself was split up into a 38km on the first day, a 37km on the second, and a 32km on the last day, each of which took close to six hours to complete. Co-founders of the Sisters, Lisa Micklewright, Judy Paul and Megan Hobson, were over-joyed by their fellow runners’ accomplishments.

“[I am] very proud of everyone for hanging in, digging deep and encouraging each other,” said Micklewright. “Everyone was challenged in different ways. [The] challenge was tougher for some than others but the power of pulling together was phenomenal,” she added. Micklewright was pleased with the difference that the group has made in the community. “So proud to be able to make a difference to our town and to the lives of many. Also grateful to the people we are running for, as they are giving to us by motivating us to step up to this amazing challenge.”

Paul echoed similar sentiments. “After all the hard work, training and fundraising and organizing, it was wonderful to be out in the Baviaans,” she said”. It was energising.”  Paul commented on how the run changed each of the women involved. “Each one of us grew along the way, changed positively by the journey of finding resilience for the benefit of others,” she said.

Kruiskamp expressed how the Lukhanyiso village project drove the group to finish. “When the going got tough we spoke about the lives we were running for and the change that would come from this run in our own lives as well as all of those who will be positively impacted by Lukhanyiso Village,” said Kruiskamp.

The funds that the group has raised have afforded the Lukhanyiso Village the ability to take on their first employee, as well as open their office on Wednesday 2 May. Kruiskamp is thankful for all the help that the community has given to the group. “The funds and awareness raised for Lukhanyiso Village has been incredible and I am overwhelmed at the support from our local community as well as family and friends around the world. This is just the beginning of great things to come for Lukhanyiso,” said Kruiskamp.