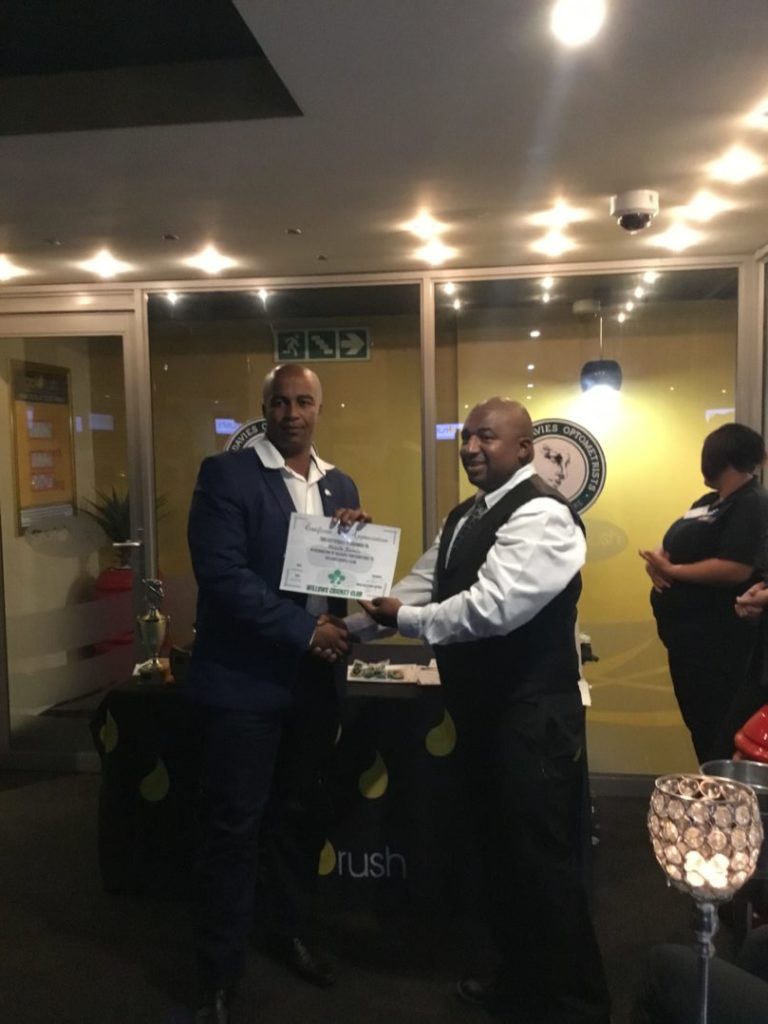 Melville Daniels (Left) receiving an award from Club Vice President Xenaphen May (Right). Daniels won an impressive total of 5 awards, including Player of the Season, best all rounder and best batsman, with 248 runs in 10 matches. Photo: Matthew Jennings

Knights Cricket club bowler and ex-Willows player, Mbulelo ‘Asi’ Budaza Guest Speaker, and said it was “great to be there, on the night, being able to motivate the youngsters and help keep them motivated through their cricket.” Budaza, who began at the club under the guidance of people like Daniels, felt ‘humbled’ to look back to where his career began.

May spoke about the evening and about the season at the end of year function.“The whole idea behind the evening was to motivate the players, to improve and perform as well as to show our appreciation as an executive, to the players for their commitment every Saturday, Sunday and throughout the weeks of training,” said May.

Willows Captain, Mohammed Sonday reflected on the season, stating that he was “proud I am to be part of the club and the team”. Tribute was paid to the late Lucius Jordaan who had previously been part of the club.

Sonday was awarded the most improved player of the season award, with Seviano Jasson getting the nod for Most Dedicated Player of the Season. Other notable awards included the award for best batting performance, which went to Abner Accom for an outstanding 77 against league giants Salem, as well as Thandisile Ngowana who was rewarded for Best Bowling Performance of the Season (7/65 (10) vs Sidbury),  and Best Bowler of the Season, with 17 wickets in five games.

Overall, the evening was a grand occasion, where everyone enjoyed a good night and where the Spirit of Willows Cricket Club was joyfully illuminated. Despite the struggles this club faces, all members look to keep moving forward, and the evening was a great celebration of that progress.