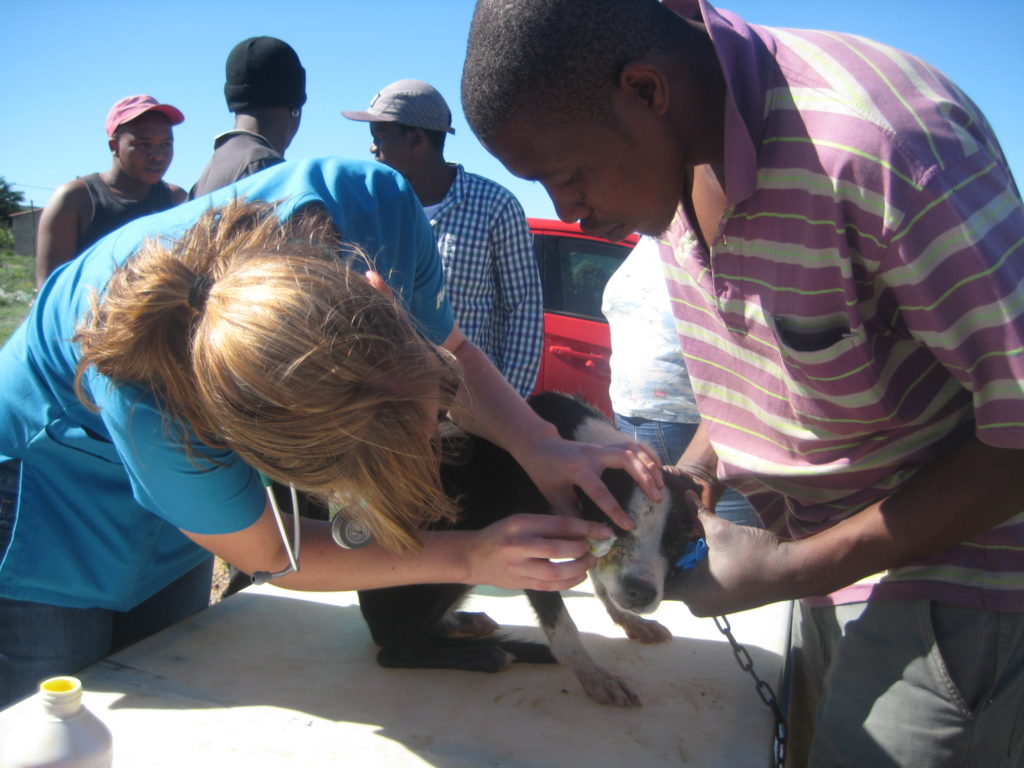 Dr. Ashleigh Lemon treating the dog hold by its owner

Wednesday 18 April was a special day in Vukani, as the SPCA, Compulsory Community Service (CCS ) and Ikhala Vet Clinic came through to help residents with their dogs.  Animal Health officials have been concerned about an outbreak of Distemper Virus and Parvo Virus; as well as the usual cases of dog malnutrition and loss of hair.

Residents were urged to contact a Vet or the SPCA as soon as they notice a problem with their animals.
Dr Ashleigh Lemon a Veterinarian from CCS who graduated last year is working with the State Vet in George Street, from where they coordinate Vet services in Grahamstown, Buthurst , Somerset and Port Alfred. The State Vet has basically started a Primary Healthy Care clinic in George Street where residents who cannot afford a private Vet can bring their dog for treatment, Dr. Lemon said.

The three–SPCA, CCS and the Ikhala Vet Clinic have formed a partnership, Dr Lemon said, that can work well together.  For example, the SPCA can help with transport (as the Vets and many residents who need their services don’t have their own cars),  the doctors provide the treatment and the clinic dispenses the medication. The plan is to do this at least twice a week, she added.

Dr Lemon mentioned five disease that Vukani residents out to look out; especially Distemper Virus , which has no cure and whose symptoms include running eyes, running nose, vomiting and not eating. These symptoms can be confused with those of other diseases, but in on one dog, they often mean DV, she said. She also mentioned Parvo Virus  which is common in puppies whose stool is often bloody before they die.

She asked residents to call the Primary Animal Health Clinic in case they need help.

While Dr. Natalie Morley (among a staff of six) hails from the private animal facility clinic Ikhala Vet Clinic, she is also keen to be part of partnerships that help the general health of animals in all of Grahamstown. At Ikhala, they deal with everything from little birds to buffalo; but have since added an outreach programme every Wednesday, in partnership with the State Vet and the SPCA.  Dr. Morley asked residents to contact the clinic if they had any enquiries.