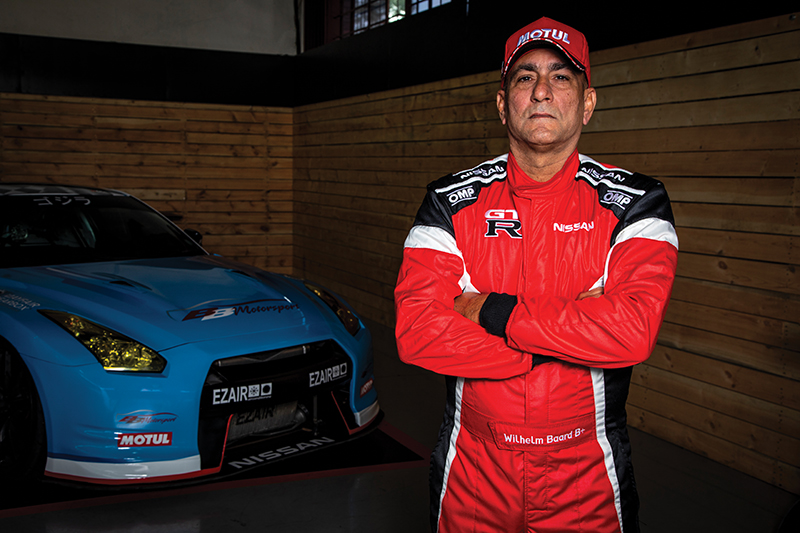 Wilhelm Baard will race "Armageddon" again this year, a highly modified Nissan GT-R that broke the 40s barrier on the Simola Hill in 2017. Photo Supplied

Nissan, which was crowned King of the Hill for both production and modified saloon cars at the 2017 Simola Hill Climb, has entered three category-defining vehicles for this year’s competition.

First among the three is a first generation NISMO LEAF race car (RC), which will be piloted by Nissan product manager and test driver Janus Janse van Rensburg. This is the first time in South African history that an all-electric vehicle is entered in a Motorsport SA sanctioned event.

“The NISMO LEAF RC is truly special,” says Janse van Rensburg. “It is powered by a completely standard 80 kW LEAF electric motor, but the entire drivetrain has been moved to the back of the vehicle and now powers the rear wheels.”

Aside from the standard drivetrain, the LEAF is completely hand-built from aircraft-grade aluminium and carbon fibre. It features a roll cage, fully adjustable brakes and suspension as well as semi-slick racing tyres. It weighs 930 kg.

“Our team will work closely with MSA safety marshals and medics to train them on this new form of propulsion. While there is no risk of a petrol fire, charging the 390 Volt battery requires a unique set of safety precautions,” says Janse van Rensburg.

The NISMO LEAF RC will be joined by the much renowned “Armageddon” Nissan GT-R of BB Motorsport. Armageddon will again be piloted by Wilhelm Baard, the reigning King of the Hill and the first person to break the 40 second barrier up the Simola Hill in a modified saloon car.

“This year, Armageddon will have even more horsepower that can be called on if needed. It also has a more finely tuned aerodynamic and handling package,” says Baard, who was nominated for the 2018 Pirelli SAGMJ Motorsportsman of the Year as the two-time Simola and reigning Nelspruit King of the Hill.

“The fact that there will be Nissan GT-Rs competing with anything from 700 horsepower to more than 1 500 horsepower is testimony to Nissan’s engineering brilliance. It is no wonder that the Nissan GT-R is the most sought-after hill climb vehicle at Simola.”

Last year, Baard broke the psychological 40s barrier for modified saloon cars when he set a winning time of 39.892 seconds up the 1.9 km track. This year, he believes that one of the front-running supercars will break 39 seconds.

“We are expecting very tough competition from other supercars, especially the other GT-Rs at the event. Aside from a new record up the hill, we believe that the competition will make for great spectating on Saturday and Sunday.”

Edrich Zwiers will also compete in the NISMO BB Motorsport racing colours alongside Baard in a modified R35 Nissan GT-R.

“I race my GT-R on track, so it was not developed as a specialist hill climb vehicle, but I still believe I could break 40 seconds this year,” says Zwiers, who has dramatically modified his R35 GT-R with the help of BB Motorsport and Nissan South Africa.

“Our GT-R has been fitted with semi-slick tyres, a straight-cut billet gearbox, front and rear racing differentials from Quaife and a new clutch basket that can handle 2 000 horsepower. BB Motorsport has also upgraded all the major engine components and the engine mapping, which will make this R35 GT-R a completely different beast to the model that gave us 7th place in the King of the Hill last year,” says Zwiers.

While Zwiers and Baard will fight it out in the modified saloon car category, Reghard Roets will return to defend his title as the 2017 Saloon Car King of the Hill.

The Saloon Car category does not allow for any vehicle modifications, other than those that can be fitted by the manufacturer to a new vehicle. This means that Roets’s R35 GT-R from Melrose Nissan will feature road-going tyres and 95 octane petrol.

Roets won the category last year with a final run of 44.540 seconds, beating fellow GT-R racer Jaki Scheckter by 1.415 seconds. It was his maiden entry in the competition.

“I really look forward to returning to Simola this year with the same GT-R as last year. While Baard and Zwiers have shown the breadth of the GT-Rs’ capabilities, I believe that our R35 GT-R will show why the standard GT-R has become such an iconic supercar.”

Previous ArticleHealth: The Invasion of the Body Snatchers
Next Article St Andrew’s Hockey-thon