Health: The Invasion of the Body Snatchers 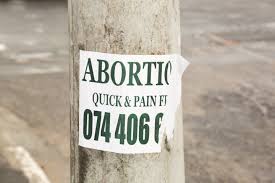 I have probably driven past the faded poster on the corner of 3rd on Luke stating “safe and cheap abortions” for as long as I can remember. And to be completely honest with you I have never taken into account the severity of how dangerous that could probably be. To put it lightly I regarded that poster in the same way as the one that says “safe penis enlargement- call here”, I figured it was just a joke.

Curiously enough I have even prank called the number before just to hear what was on the other end of the phone call. However, recently I was listening to a show on the radio in the car presented by Eusebius McKaiser. The show was surrounding the proposed amendment that is being made about the current abortion law. It just so happens that I was in a car with my very opinionated yet respectful father, who I saw in the corner of my eye fuming over what was being said on air. And I could relate.

Firstly, for anyone who did not know or did not bother to really think of topics like this one, then consider this for a moment. The African Christian Democratic Party has proposed that the current abortion legislation should include that before a woman goes through with the procedure that they are forced to see ultrasounds of the fetus.  The proposal also stipulates that before the woman can go through the procedure they have to go through a mandatory pre-abortion counselling. Oh, and just in case you’re thinking it won’t get worse than that they also want to remove the current provision in the abortion legislation that allows the mother to abort after the 20th week of pregnancy.

Now that we’ve got the facts out of the way, let’s get to the personal logistics. So this MP (Member of Parliament) of the ACDP named Mrs. Cheryllyn Dudley (I am honest enough to say that before writing this piece I had no idea this person even existed or even sat in parliament) told Daily Maverick that this amendment “will only ensure women are able to make an informed decision”.  What the f-word-that-rhymes-with-suck. So I decided to do a little research before I continued to get angry at a woman I have never actually seen in parliament let alone heard of. So I googled Cheryllyn Dudley, I thought maybe she has a degree in psychology and is qualified to make a psychological analysis of a decision-making process that comes with terminating a fetus. WRONG! Mrs. Dudley is a saint. An LLB degree, a husband and four kids. I mean of course someone who has the “perfect” life would try and convince another woman who honestly is probably trying to have a future as great as Mrs. Dudley’s would make an amendment change to the abortion law. You might as well remove the law all together because clearly you think it’s just easy to just get an abortion. I bet you think it’s as easy to terminate the fetus as easy as it was to make it? Right? How about I enlighten you a little, you know as a normal student at Rhodes University who sees things like this happen more than you actually care to think.

I did a little research. It was quite an interesting little experiment: I just went on Facebook and typed “Rhodes Confession 2018: abortion”… You’d probably be surprised at the amount of angry females there are like myself okay not exactly at the legislation. Yes, more at the pathetic men that get females pregnant and like to act brand new when she either says she wants to keep it or that she needs money because let’s not forget that these things cost money. I mean now guys want more of a say in what happens to our body. I mean some of you have already violated us with your unapologetic sexism and patriarchy, so sure you can totally have a say in me choosing to determine my future in the hands of a fetus! But back to the money portion of this conversation. Yes, there’s a Government hospital in Grahamstown that does administer abortion pills. Yay we are all saved. Nope. Settlers does free terminations up to twelve weeks, after that you can either follow one of two options; go to Dr. Bull or Dr. Gainsford or find your way to Marie Stopes in Port Elizabeth- that is only 126 km from Grahamstown, that’s not bad.  Again, nope. If you are someone like myself that lives on a student budget you are literally that-f-word-that-rhymes-with-sucked once more. This research thing didn’t get any better, so I decided to post a Rhodes Confession myself, I mean it’s anonymous so no one would know it’s me.  So simply I just wrote “Hey guys, does anyone know where in Grahamstown one can get an abortion. Please pretty desperate”. The first comment that popped up just for interest sake was some patriarchal pathetic homo-sapien of a male telling the confessor (me) that he won’t tell me because I was being “stout” (naughty) and I got myself in that position so I should live with it. Two minutes after posting the comment he deleted it. Thanks helpful commenter. Nevertheless, there were about two helpful comments. The first shared information on how the abortion system works in Grahamstown. The second shared a commendable link to an online counselling site that you can go to after the procedure.

What’s the point of this little tangent I had? I believe the question should be why other people are trying to make big decisions for women. I mean if it’s not religion (I’m talking to you ACDP specifically Mrs. Dudley) trying to make that choice by changing an entire amendment in a legislation. Then its men that are trying to make the choice for women based on things like “I’m the man” and “It costs money”. On that same show on 702 with Eusebius McKaiser men texted in saying that if the person he impregnated decides to keep the child when he wants to get rid of it, it should not be his problem. Or men calling in saying that men should have more of a say in the abortion decision, not equal; MORE. I mean it’s not bad enough that we earn 27% less than the average male in the same job or the fact that most men cringe at the thought of a woman having that thing they don’t want to talk about once a month, so sure let’s give you all the power when it comes to the future of an entire child.

Tangent or not, throughout history women have been known for nothing more than being someone’s wife or mother. The power to control our future has literally been given to us. I will not dispute the physical, mental or emotional trauma that comes with terminating a fetus. But by changing that amendment alone, The ACDP and men take away what little power we as women already don’t have.  I mean if that’s the case, stop administering free birth control pills bearing in mind it’s not as accessible as one would think. But I suppose that’s an “tangent” for another day.