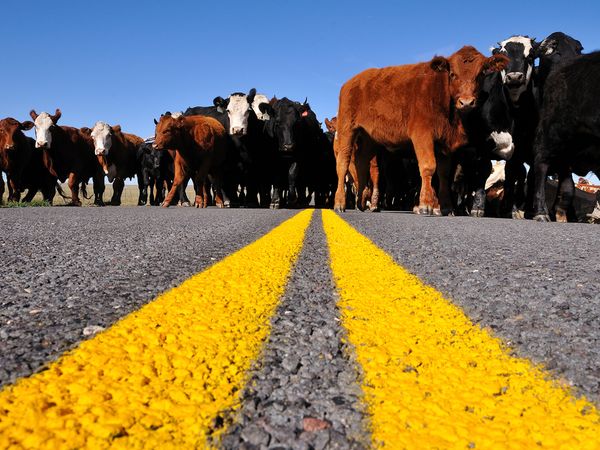 A woman whose vehicle hit a stray cow on a Grahamstown street last Friday night says if the accident had been any worse, she fears she might have lost her baby, due in two months, or even been killed herself.

“On the way back, as we came around the corner of George Street, there was a cow in the middle of our side of the road which we drove straight into,” Du Toit said.

“We weren’t driving fast at all, but because it was right around the corner we had no time to avoid the cow and it came as a surprise.”

The friends stopped and parked beside the road and called a relative for help.

“People stopped to ask if we were okay.”

The cow didn’t die on impact, Du Toit said, and they had to call the SPCA, who euthanased and removed it.

“I’m just really grateful for the fact that the cow didn’t come through the windscreen and that we are both okay,” Du Toit said. “It’s crazy how fast something can go wrong. To think that could’ve been the end of one or both of our lives is disturbing.

“If the accident was any worse I could’ve lost the baby,” said Du Toit who is 7 months pregnant.

“The cow had been fatally wounded when a vehicle collided with it,” Thomas said. “My inspector attended the scene to assist the animal and due to the severity of the injuries the cow was put to sleep.”

Approached for comment, Makana’s acting social services manager Coenraad Hanekom said the cow’s owner must be held accountable for the incident, if they could be traced.

“As you know, there have been two cattle drives this year to try and stem the influx of stray cattle,” Hanekom said. “This has had some effect but has not stopped the problem.

“We have limited resources to deal with the situation and the lack of pound facilities within the boundaries makes it even more difficult to deal with all the stray cattle. Cattle have to be driven to the nearest pound in Alexandria, which is more than 50km away. The municipality has no vehicles that can transport cattle over that distance,” Hanekom said.

Previous ArticleRead and develop your social intellect
Next Article Health: The Invasion of the Body Snatchers