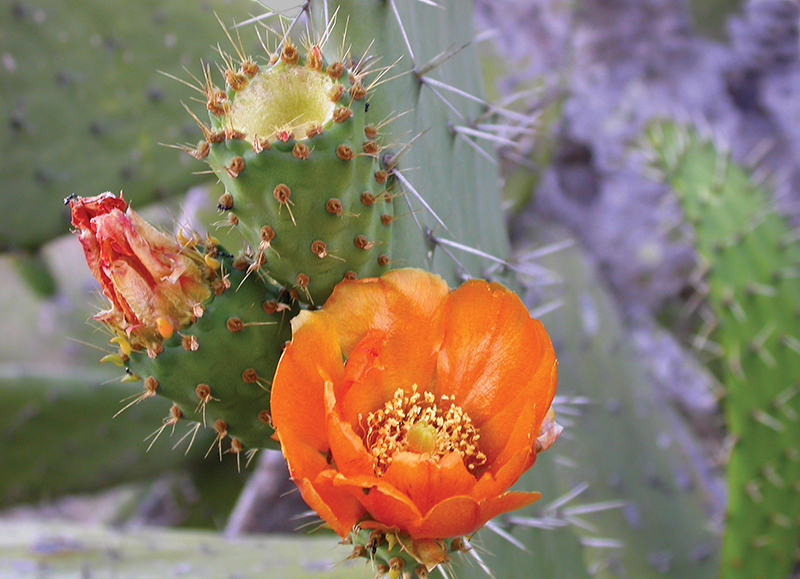 That is the song my friends and I used to sing as we grew up in the village. Singing about the succulent Mexican invader with oval, flattish, green pads called cladodes, which grow out of each other to form a tree-like structure. Hard spines grow out of the sides of the cladodes. Flowers are large yellow to dark orange followed by greenish orange to purple, pear-shaped fruit covered in minute barbed bristles called glochids. This invader has found a home here in South Africa and when you are driving on the R63 from King William’s Town towards Dimbaza you will find a village called Tolofiyeni named after the prickly pear.

Indigenous to Mexico and an important food source since prehistoric times. It spread around the world in post-Columbian times, sometimes becoming troublesome weeds. Today, prickly pears are grown on a commercial scale in various countries, including, South Africa and the USA. One species at least was probably brought to the Cape in the seventeenth century. One almost certainly the Opuntia ficus-indica, South Africa’s most common prickly pear, was taken to the midland and eastern districts with the earliest Afrikaner frontier farmers in the eighteenth century. Travellers around Graaff-Reinet reported it in the 1770s and these specimens were probably the progenitors of wild, Eastern Cape prickly pear. It is called turksvy (Turkish fig) in Afrikaans, and Xhosa name itolofiya, is an adaptation of this. It is uncertainly when this word was adopted into Xhosa language, but was used in written sources in the late 19th Century and is recorded in Kropf’s Xhosa dictionary of 1899 as word loaned in Afrikaans.

“Tolofiya…Tolofiya…Tolofiya” a loud voice of the middle-aged woman walking around the streets of Joza Location selling the tolofiya (prickly pear).The fruit comes into season in summer, from early January to mid-March. You will find it in buckets, tin dishes or plastic bags on the streets of Grahamstown and along the N2 road towards Peddie. You can’t miss the prickly pear sellers along the road during the season, as it’s a source of income to many black households.

Uses of the Prickly pear

The fruits are pulled off the plant using a long wire hook called igwegwe and rolled about on the grass or beaten with leaf branches to remove the tiny bristles before being transported home. Both white and black uses it to make jam, syrup, chutney and other preserves. The overripe fruit is preferred to make iqhilika yetolofoyi. The Xhosa term iqhilika, and Afrikaans karee, adopted from the Khoikhoi !kharib or !xari. It was then applied to beer brewed from the fruit of prickly pear. Afrikaners distilled a potent spirit (witblits, or white lightning) from the fruit on the farms. The cladodes provided livestock foddler in droughts and were an ingredient for homemade soap. Africans produced a laxative medicine and blood purifier from them.  Overtime, prickly pear become deeply embedded in the culture and daily life of the Eastern Cape.

Ripe fruits are a source of minerals (especially calcium and magnesium), as well as vitamins (up to 40 mg vitamin C and 380 μg nicotinamide). The energy yield is low (36 kcal per 100g).

Enjoy the prickly pear! Please don’t overeat it or else you would be constipated.