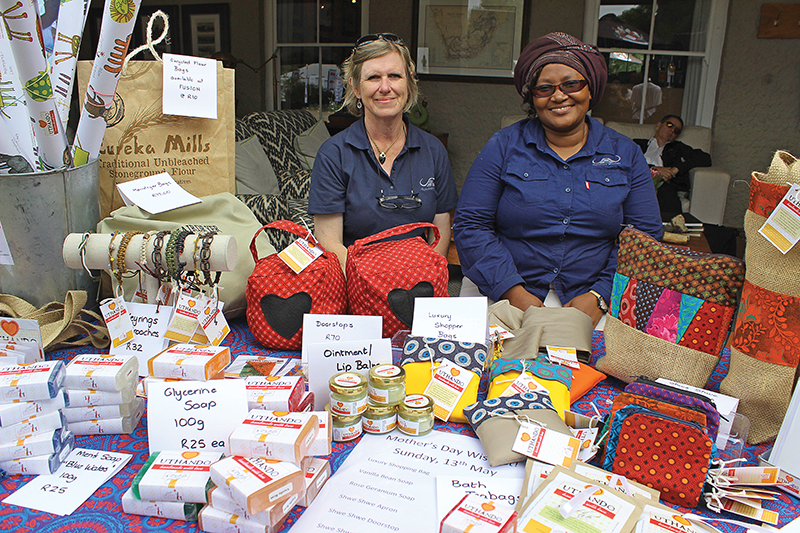 Lime Badu and Michelle Bradley display the products made by members of the Ubunye foundation. The Ubunye Foundation is supported by Kwandwe .

The annual game auction at Kwandwe Game Reserve last Saturday was subtly different from previous editions. There was the usual festive atmosphere, the high-speed patter of auctioneer Brandon Leer and the enticing aroma of kudu burgers wafting through the country air.

The auction went off smoothly even though buffalo prices were much lower than in previous years. The hammer often had to come down closer to a paltry two million rand rather than the six million plus of last year.

The highest price paid for a pregnant buffalo was R4.5 million.

The two most important factors determining value of game are genetics and horn length. These two are closely linked because the genetic material of a buffalo that has long horns is what bidders really look out for.

There was nothing new about the substantial bids coming in from the bank of phones, but this time there was also an online, timed auction running in parallel. It opened on 12 April at 8am and closed on 14 April at 7pm.

The opening bid was set at a predetermined level by the auctioneer and those who had registered online could place higher bids at multiples of a set increment. The entire registration and purchase of an animal or a whole herd of animals is paperless and can be completed on a smartphone.

In a race-conscious South Africa, one couldn’t help noticing that as usual, almost all bidders, and indeed most of the audience, were white. Game farming and trophy hunting are still very much in white hands – with the notable exception of our President, Cyril Ramaphosa.

However, this time although the complexion of the crowds had not changed, there was a notable changing of the guard at the top. Tebogo Mogashoa, recently elected president of Wildlife Ranching South Africa (WRSA) was there with his wife Didi looking out for new stock for his Babirwa Game Breeding Lodge in Limpopo Province.

For most people, bidding hundreds of thousands for game animals is not an option, but the auction is often a pleasant day out. The Rotary Club makes unbelievable kudu burgers and the children have a wonderful play area.

The biggest disappointment this year was the complete absence of game in the viewing area. It used to be a wonderful opportunity to gawk at some of the animals that were about to be auctioned off. This is no longer an option as one of the Kwandwe game rangers explained it is simply too stressful for the animals.

They would have to be captured several days before the auction and then kept in unfamiliar pens – a harrowing experience for animals that could lead to fatalities.