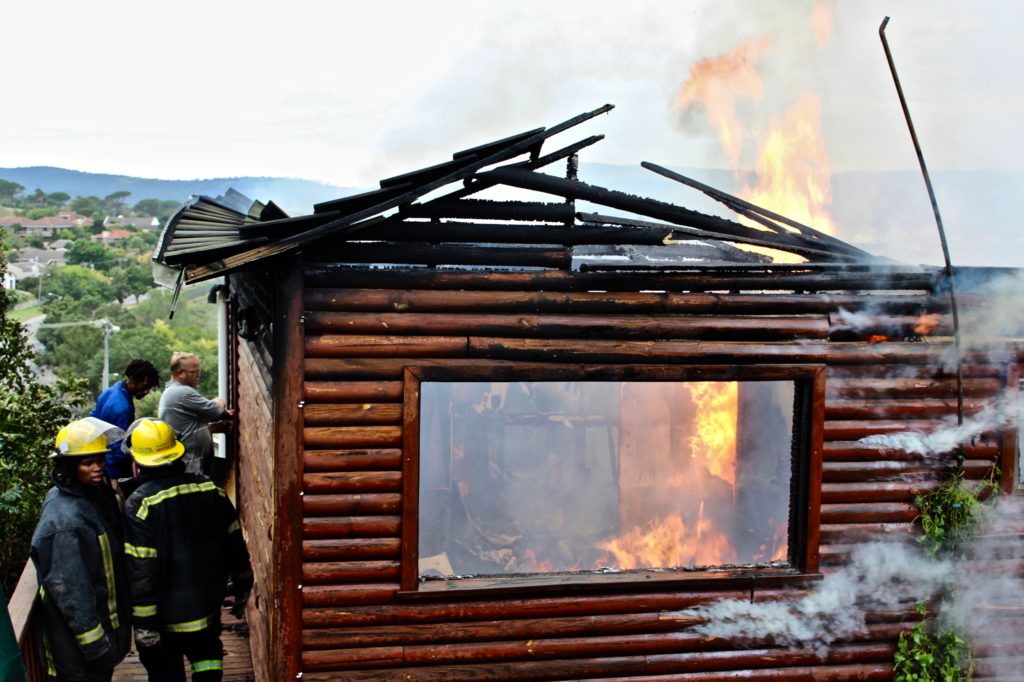 A young couple escaped with pets, cellphones and engagement ring when a fire destroyed their home on Tuesday 17 April.

The couple, who were recently engaged, awoke to find their wooden cottage filled with smoke and quickly evacuated, taking only their pets, cellphones and engagement ring. The couple and their animals were safe.

Emergency services responded quickly, rushing to the scene in McGowan Street in west Grahamstown, several streets above Graeme College. The couple were leasing the cottage.

Flames and smoke grew as volunteers struggled to extract water from a nearby fire hydrant. Water availability and pressure continued to be a challenge during the incident, and Grahamstown’s attempt at rain did little to help.

According to an official at the scene, the couplet at the fire hydrant next to the house had been stolen. This was confirmed in a statement by SAPS spokesperson Captain Mali Govender, who said for this reason the fire truck had to drive to the next street to fill up repeatedly, hampering the extinguishing of the fire.

Makana Fire Chief, William Welkom said, “One of the fire hydrants in McGowan street was vandalised [the lug was removed]  and could not be used; however, a nearby fire hydrant in the area was used to fill the tanker, whilst the other vehicles continued with damping down procedures.”

At one point, the floor of the cottage fell and was sliding toward the house below, in Clarke Street.

“The structure and contents were completely destroyed by the fire,” Welkom added, “Adjacent properties including the main house were protected from the fire. No injuries were reported during the incident.”

Said Spokesperson Govender: “The cause of the fire still has to be determined. At this stage it appears to be an electrical fault.”

Welkom’s statement supported the suspected cause of the fire as being electrical.

The couple lost everything in the fire, and have requested assistance from the community.

Last Friday, 13 April, The Grahamstown Residents’ Association (GRA) put out a call for assistance for an elderly woman who lost her home in a fire that started from an electrical fault.

Tina Alkaster (86) lost everything, including her identity documents in the fire.

The GRA, along with Makana Cleansing Department and local community members, have made significant progress in clearing the site of debris, and re-building Alkaster’s home. Community members continue to come together to support her and donations continue to be collected at Pick n Pay as well as through the GRA.

Should any community members be willing to assist the young couple as well as Alkaster, please contact Grocott’s Mail. Whatsapp 076 733 1770.