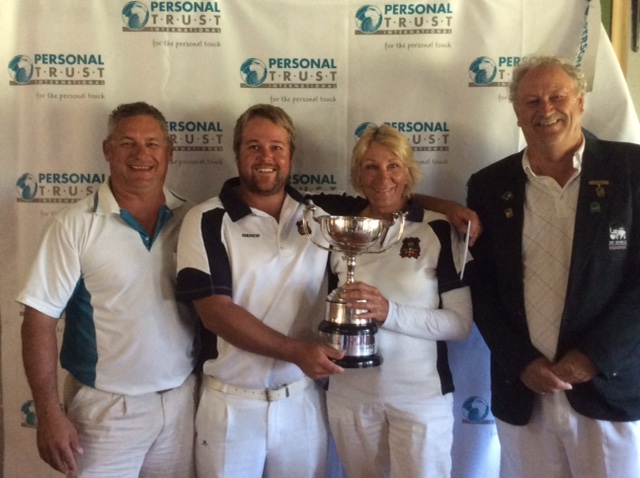 The winners of the Eastern Province Mixed Pairs competition from left to right: Sponsor from Personal Trust, Carl Vermeulen, Andrew Sterley, Marlene Mitchener, and EP President, Brian Buchanan. Photo: Supplied
Albany bowlers Andrew Sterley and Marlene Mitchener won the Eastern Province mixed pairs final at the Port Alfred bowling club last weekend.
The pair had a very good start on Saturday morning (14 April) when they beat Hennie Slabbert and Dalena Muller who have not only won the EP finals before, but have won the SA National mixed pairs finals and came second on another occasion. They followed this up by beating another strong pairing of Eric Kent and Jenny Giles in the afternoon.
Sunday morning dawned and they had to face F. van der Merwe and Riana Du Toit from Graaff-Reinet. Once again, Sterley and Mitchener triumphed, although this match was particularly difficult. After winning three good games Sterley and Mitchener had won their section and qualified to play in the afternoon final against the winner of the other section, Barry van Wyk and Elsa Grobler.
The “local” pair (who are both still classified as novices) had a great start and midway through the game had built up a good 14-3 lead. Barry van Wyk is not the captain of one of the Eastern Province senior sides for no reason though and the fight-back started with a big score of five, followed by numerous two’s and one’s. By the 19th end they had scored 13 shots in a row to take a 16-14 lead. Sterley and Mitchener fought hard though to win the 20th end with a one and repeated that in the 21st end to tie the game at 16-16.
After that the umpires came on to the rink to toss a coin to determine which side would play first in the extra deciding end. Mitchener saved her best for last, and bowled four great bowls in the last end, however, so did the opposition. “The holding shot” changed numerous times before Sterley and Mitchener were holding game with Van Wyk having the last bowl of the match. He played into the group surrounding the jack and the jack squirted out to the side of all the bowls into open space. When they looked at the head Sterley and Mitchener were just holding and with that they became Eastern Province mixed pairs champions.
Sterley and Mitchener will now travel to Alberton in June to play in the SA National mixed pairs finals and all local bowlers will be rooting for them when the time comes.
Previous ArticleMY GARDEN… Of Zim spinach!
Next Article Grahamstown’s Ironmen and Ironwomen