Brumbies off to winning start 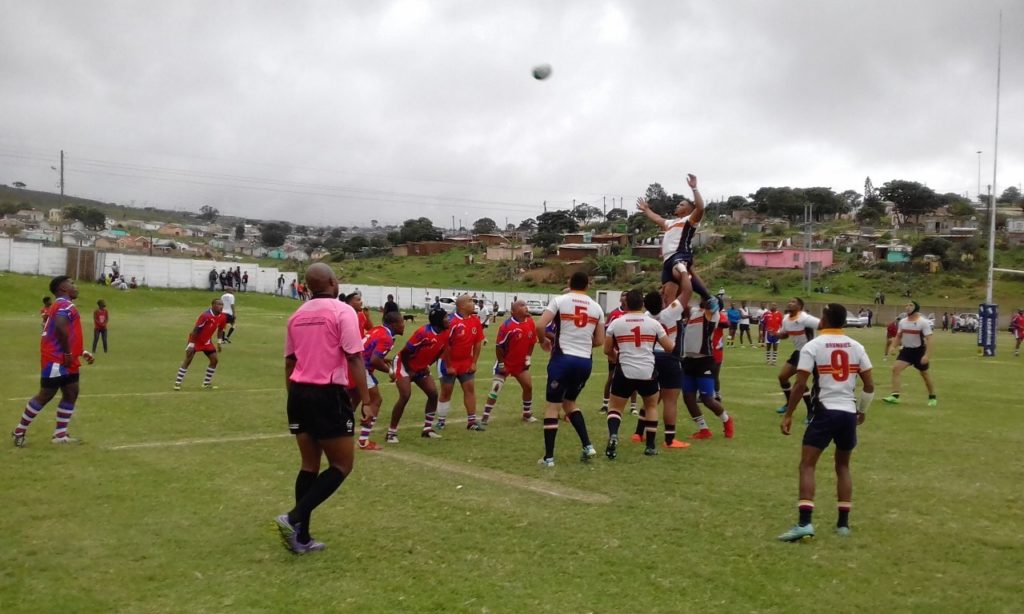 The Brumbies look to use their linnet as an attacking weapon on the Windvogel 5m line. Photo: Lutho Magasana

The Grahamstown Brumbies opened their Grand Challenge Cup season with a win over Port Elizabeth side Windvogel in a match played at the Grahamstown Oval on Saturday April 14. The hosts looked to continue their form from the previous couple of weeks, during which they have participated well in the SEDRU league.

Although the visitors started well by putting pressure on the Brumbies, it was the hosts who scored first, with Chad Gill getting the ball over the try-line and Duane Brown successfully securing the conversion. After the try, the Brumbies relaxed and the visitors took the opportunity to equalize, scoring a converted try of their own. Two minutes later, Unathi Kongwana dived over the try-line, however conversion was missed by Brown, which took the Brumbies to a 12-7 lead.

The hosts kept on attacking and extended their lead with the try of Barabbas, however Brown missed another conversion. The visitors attempted to catch up and eventually Dwayne Camper made an exceptional run to the try-line, with Garth Sampson successfully taking the conversion.Shortly after, the Brumbies showed their dominance again when Chadwil Jeggels scored a try , which made the conversion for Brown easy. Just three minutes before the end of the first half, Brumbies’ Janie Du Toit made an exceptional run from the 22m line and scored an unconverted try, the last points of the half.. The half time score was 29-14 in favour of the hosts.

The second half opened with the visitors’ Dwayne Sampson scoring a brace, however, both conversions were missed. The hosts fought back through Brown, who scored a brilliant try and converted his own score, taking the score to 36-24. Another brilliant converted try by Mains took the game beyond the visitors’ reach. It was Windvogel that had the final say, after they scored one last unconverted try just five minutes before the end of the match. The final whistle blew with the score reading 43-29 in favour of the hosts.

Brumbies coach Eugene Janson was thrilled with result. “It is a great start for a new season after we did not do very well last season. This season we are working on becoming better every week as individuals, as a club and get a support from the community”, said Janson.

The Brumbies will now go into a bye week, before travelling to Alexandria to take on the Trying Stars.