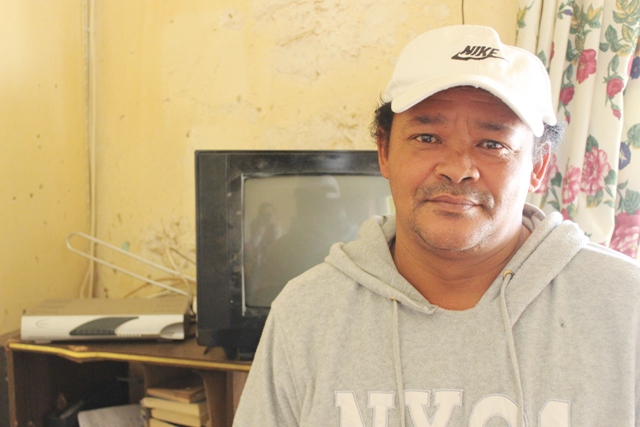 Preswich Fourie was watching National Geographic around 7.25pm on Thursday night 12 April when his TV exploded, followed by his decoder. His portable radio was destroyed and the lights tripped. Photos: Sue Maclennan

Residents affected by last week’s power surge in the Kingswood/ Albany Road area have been urged to write to the municipality detailing damage to their appliances and the cost. The incident on Thursday 12 April that affected dozens of households was triggered by the theft of copper cables from a substation in the area, Makana’s Communications Unit said.

In a statement Friday 13 April, the municipality said they had opened a criminal case following a break-in at the Kingswood substation, corner of Caldecott and Currie Streets.

“The vandals stole copper cables, in the process damaging the neutral conductor. This triggered high voltage, causing major damage which led to power outage and damage to people’s electrical appliances,” the Unit said.

“It was like Guy Fawkes,” Trotter Street resident Sylvester Bowles told Grocott’s Mail the next morning. “This light here was in flames,” he said pointing to the remains of a streetlight next to the cemetery. “Flames were running all the way along this cable [the main overhead street cable].”

On Friday morning there were bits of metal and congealed melted plastic on the grass underneath.

Bowles was at home a little after 7pm when the lights in his house started exploding.

“Smoke was coming from my TV and it was just chaos,” Bowles said. “It was frightening because my family was inside. The house was full of smoke and we didn’t know what was happening. It was quite scary.”

Bowles’s TV burnt out, along with his DSTV decoder and a computer.

Preswich Fourie, who lives opposite, was watching National Geographic around 7.25pm when his TV exploded, followed by his decoder.

“From my child’s room I heard an explosion too.”

His portable radio was destroyed and the lights tripped.

“I went outside and saw all the light were off and people were complaining about their TVs bursting.”

A crowd had gathered near a burning lamppost in Grave Street, next to the cemetery.

Neaver Davies lost her microwave and DSTV – “but luckily nothing else”.

“It was quite scary last night. The lights started flicking and the dish just exploded. My husband got up, went outside and saw at the end of Trotter Street one of the poles had caught alight – there were flames,” Davies said.

“We took a walk down and no one could tell us what had happened. It was quite scary because the whole street was outside and you could see how the lights were going on and off and the TVs were flickering.”

Clayton Doyle lost a 42cm LG television set. “The TV goes on and off,” he said. “There’s no picture – just the sound only.”

Marilyn Loutz was still counting the cost this morning. She is a caterer and depends heavily on her appliances.

“My microwave is dead,” she said, trying to switch on appliances as she walked from room to room. “My fridge is dead.”

Worst of all, she had to quickly find storage for a freezer full of lamb and 20kg chicken.

“I just want to know, what’s going to happen to my stuff – who’s going to replace my stuff here,” Bowles asked.

“Who’s going to reimburse us for what happened? Was it the municipality’s fault, or what’s going to happen? I’m still in the dark,” said Fourie.

Makana said in their letter to affected residents that for recourse, theyr were urged to write a signed letter stating:
* Their full address
* Two quotations of repairs or purchase of the exact or similar appliance
* Pictures of the damaged appliances.
* Banking details with proof of banking attached.
The letters should be addressed to:
The Municipal Manager Mr DM Pillay for the attention of Mr Mzomhle Radu, Manager: Electricity. Citizens could submit their letters to the Department of Engineering and Infrastructural Department, High Street, Makana said.

“The municipality is appealing to the community to stop this malicious destruction of property,” Makana said in their statement. “Looking at the state of finances in Makana, it is costly and a waste of precious resources. It inconveniences far more people than it benefits.

“The municipality regrets the inconvenience and damage it caused to our resident’s properties. We urge our community members to fight against vandalising of municipal assets.”

Director of Infrastructure and Technical Services at Makana Municipality Dali Mlenzana said Grahamstown substations had been vandalised previously, with cables and earth wires usually the target.

Asked what security measures were in place at these structures, Mlenzana said all substations were padlocked.

“The major ones like Summit, Sugarloaf, and Grahamstown also have alarm systems manned by Hi-Tec Security.”

Additionally, cameras would be installed on the major substations; however, because of financial constraints, no other additional security measures for city substations were planned.

Asked about compensation for residents affected by the surge, he said Makana would be claiming the compensation from their insurance.