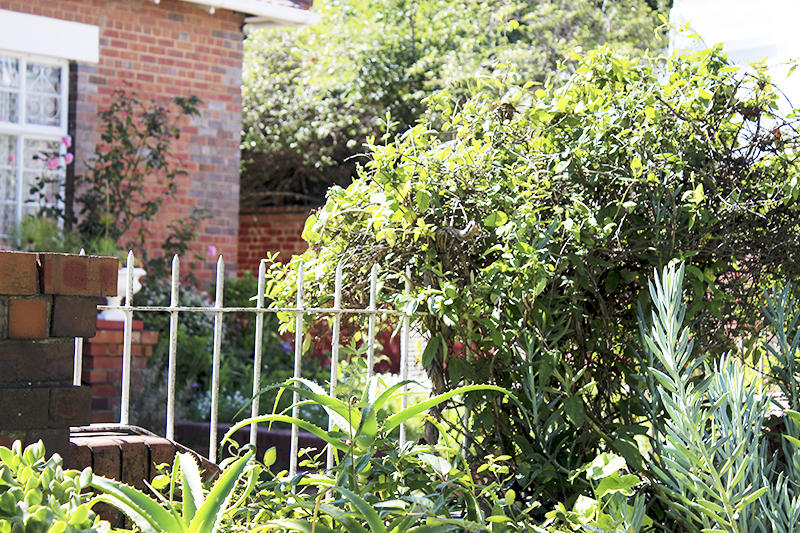 A combination of brick and metal palisades combines strength with visibility. Spikes on top provide additional security – but may not be installed on a fence less than 2m high without permission from the local authority. Photo: Sue Maclennan

Good fences make good neighbours, goes the saying. A boundary on a residential property can make it more secure, give you privacy and keep your pets inside. In Grahamstown, it’s also essential if you want to keep livestock out of your yard (or, if they’re your animals, inside!).

Grocott’s Mail looked at some of the more popular options for boundary walls and fences in Grahamstown and spoke to two supplier-installers about the pros and cons of each.

“Brick is the most expensive option,” says Linsley Bowles, whose Grahamstown construction company undertakes every type of wall or fencing. At a height of 1.8 metres (which is what you need for the best chance of keeping big dogs in), the before-VAT cost of the different options ranges from R550 a metre for welded mesh fencing to R1 900 a metre for a high-spec facebrick wall.

Ibayi Fencing in Port Elizabeth supplies ClearVu fencing (Bettaview) at a cost of anything between R1 100 a metre for galvanised to R1 250 a metre for PVC coated as well.

“Your most basic fence is treated wooden posts with mesh fencing,” says Ibayi’s Bill Gray. The material for that could set you back as little as R300 a metre.

Steel or concrete poles usually used in industrial premises, can send the price up another R150-R200 a metre.

“Add 500mm flat razor wire on top of that and you can add another R80 a metre,” says Gray.

These two don’t necessarily go together, according to the police. On the South African Police Service website www.saps.gov.za their section on safety awareness at home advises that a high fence around the house with lockable gates is much safer than a high wall due to the advantage of the improved visibility it provides.

“The primary aim of the fence is to make access/intrusion difficult and to allow dogs to move freely around the house,” SAPS says.

On the other hand, a see-through fence has the disadvantage of making the household’s movements visible to the outside world.

Hi-Tec Manager Andre Wille agrees that the advantages of visibility are debatable, however their evidence backs it as a preference.

“Many years ago we picked up a definite trend in a high, solid wall increasing the likelihood of a break-in,” Wille said. “It happened to a number of our customers and it was too many to be a coincidence. The fact is, criminals can’t be seen once they’re in there.”

The local experience is supported by criminologist Monique Marks’s 2016 report in conjunction with Durban Metro Police and security companies which came to the conclusion that walls were “policing nightmares”.

“Walls prevent patrolling officers from knowing what is happening inside a property. This detracts from the value of patrols as a form of crime prevention and rapid response. Walls can also become a defence for criminals: they’re given the freedom to conduct their activities without being seen from the street,” Marks wrote.
https://www.iol.co.za/news/opinion/do-high-walls-make-sa-suburbanites-safer-2030784

An option that’s becoming popular in Grahamstown among those with the budget for it is a combination of pillars and palisade, Bowles says.

“It’s brick structures with steel in between, so you have the combination of strength and visibility,” he says. “It’s ideal if you don’t want to be blocked in, and it allows for movement of air.” Galvanised steel can push the price as high as R3 000 a metre including the pillars.

“But you won’t easily cut a hole in it like you can with a fence.”

While the SPCA uses 2m as a guide for how high a fence or wall should be to house a dog, they acknowledge this can vary. “The breed,  jumping/ climbing ability and material used may affect this and each case should be judged based upon the individual animal,” says Manager of the Grahamstown SPCA Mark Thomas.

Before re-homing any animal, the SPCA has strict boundary criteria.

“We inspect the walling or fencing of the entire property for any holes or gaps through which the animal could escape,” Thomas said. “And we ensure that the walls or fences  are sufficiently high so that the animal cannot jump or climb over.”

However, Bill Gray, of Ibayi Fencing in Port Elizabeth, reckons if a dog really wants to climb a fence it will.

Palisade is no good for small dogs, Gray says. “Little dogs will get through the 120mm gap in the palisade. You can get by that problem by using welded mesh across the bottom to stop them getting through – or plastic mesh if your dog’s not a chewer.”

For dogs that are diggers, the long-term option is to plant the fence in a concrete beam.

“Otherwise you can use wire mesh and plant it 600mm into the ground,” says Gray.

For jumpers and climbers, 1.8m is usually enough of a deterrent. Otherwise, you should fix 600mm of fencing on the top of a wall, angled in at 45%.

Makana Municipality’s website has a section where some of the bylaws are posted. While the bylaws on boundaries aren’t available online, those applying to fences are listed in detail. Here are some highlights:

In the residential-zoned areas of our municipality you need Makana’s consent to:
* Build a fence that is more than 2 metres in height from ground level or alter or add to one more than 2m high.
* Put an electric fence on a boundary, unless it is on the top of a 2m-high wall made of brick or concrete and complies with regulations for electrical installations;
* Put barbed wire, razor wire or spikes on a wall less than 2m high.

Combustible materials like grass or reeds may not be used within 4.5 metres of a street, nor may corrugated iron sheeting.

And did you know that according to the Makana bylaws published on the website, no person may “climb over or crawl through a fence without the permission of the owner or occupier of the land”?