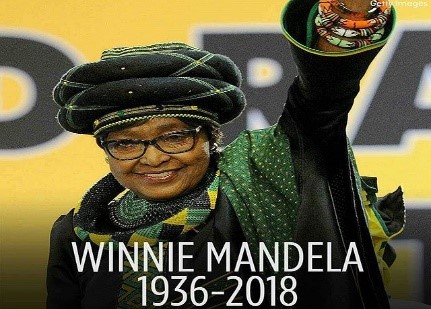 Your death has left a big vacuum as the mother of our nation.  You left us at the beginning of a freedom month, just nine days before commemorating the 25th anniversary of the death of the great comrade Thembisile ‘Chris’ Hani, another people’s commander who worked closely with you until the end.

We thank you for your sacrifice, contribution and for leading the people’s revolutionary cause fearlessly when others left for exile.  You became not only a symbol of resistance but also, a force and a pillar of strength to millions of South Africans who confronted the brutal system of apartheid and white supremacy.

Through your bravery and selflessness, you carried the banner of freedom high, led many campaigns for freedom. We shall remember you with your slogan – “Death of Freedom.”

Her ideals of a truly free democratic South Africa and revolutionary fighting spirit will continue shaping the consciousness of our nation and the world. In us, we see Mama Winnie Nomzamo Madikizela Mandela. She suffered abuse both inside her movement and by the apartheid regime.

It was your militancy which inspired millions of young lions. She survived storms, turbulences, hardship, persecution, vilification, demonisation, sustained attacks, detention, solitary confinement and triple oppression. She suffered more than any other men and woman in the struggle. She lived a life characterised by hardship without a husband, without her children , never enjoying and at age 23 being confronted by the most brutal system of apartheid and white domination.

Her house in Soweto became a political refuge; and a last stop for thousands of militant youth who went to exile to join the external mission of the African National Congress. Her house also became the first stop for MK cadres returning from exile. The apartheid system tried all sorts of tricks to brake her spirit, but she remained firm and unshaken until the end with either “freedom or death.”

It is easy today for comrades to plot and kill one another for power and access to state resources while they leave their own brothers and sisters certain to die of poverty and hunger. This is the most profound revolutionary and moral quality that made Mama Winnie different from all Leaders.

She was the embodiment of our revolutionary culture of genuine comradeship and she carried the banner of freedom as she buried hundreds of black South Africans who were killed by white regime. Winnie carried their coffins on her shoulders. She was the chief volunteer, and visited police stations to demand the release of comrades. She led the Release Mandela Campaign and many others when most ANC leaders were in exile or in prison. She had to choose between being moderate, soft, and liberal to accommodate white supremacist or being tough in line with the black oppression and their suffering. She made a conscious decision to side the suffering of the blacks majority.

As a disciplined cadre, she declined nomination as Deputy President of the ANC in Mafikeng in 1997. And even when her marriage was collapsing, she was never bitter, but left with her her dignity intact. She could have formed her own political party, but remained within the movement because she believed that the ANC was the only genuine people’s movement to complete the implementation radical socio-economic transformation.