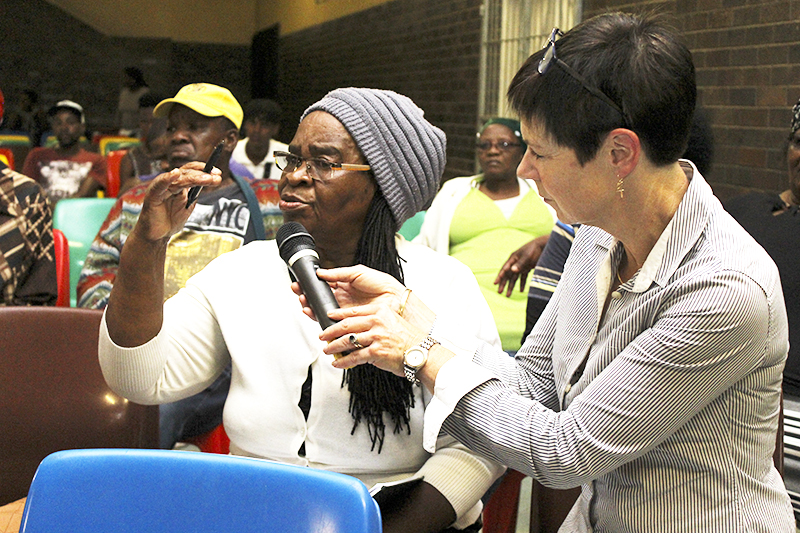 A resident speaks at a community meeting hosted by the Grahamstown Residents Association in Noluthando Hall, Joza, on Tuesday 27 March 2018. Community members raised various concerns including evictions from informal settlements, the lack of maintenance of grave sites, the lack of a home for the aged, brown sludge in the water, uneven distribution of black rubbish bags, sewage leaks and the need for traffic control at the corner of Albert Street and Dr Jacob Zuma Drive, where traffic lights have been out for months. Photo: Sue Maclennan

On 27 March, the Grahamstown Residents’ Association (GRA) hosted a meeting at Noluthando Hall in Joza.

Community members expressed their grievances on topics ranging from dilapidated infrastructure, lack of services, and ineffective service delivery. From the concerns raised, lack of maintenance and accountability seemed to be the root of the problems in Makana’s ill-maintained wards.

“The issue that handicaps us is money,” Xonxa said.

“There are reasons why there’s a lack of money,” GRA Secretary Tim Bull affirmed. “This doesn’t mean we have the resources to fix everything, but it does mean we will hold people to account.”

GRA Chairperson Philip Machanick echoed this sentiment, stating that only R6 million is allocated towards roadworks even though R300 million is needed to repair and maintain Makana’s roads. Machanick affirmed that the most affected municipal areas would have their roads repaired first, namely Joza.

Previous GRA gatherings were held within the heart of Grahamstown. The location of this meeting was chosen to allow residents to interact personally with Acting Makana Municipal manager Ted Pillay. Pillay could not attend the meeting due to an appointment with the municipal premier, set to take place the following day. Xonxa made formal apologies for Pillay’s absence.