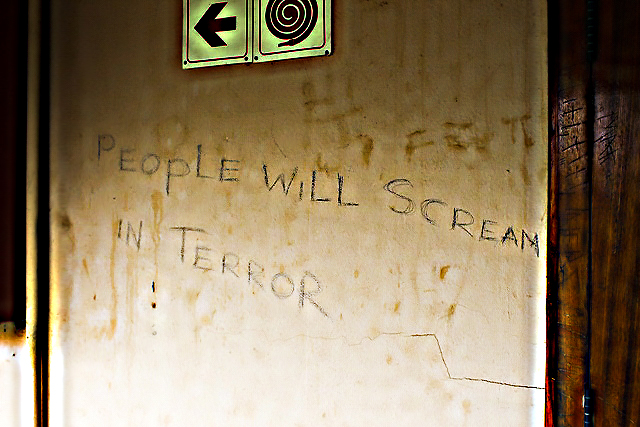 'People will scream in terror' - disturbing writing on the walls of ward 6B at Tower Hospital in Fort Beaufort. Photo: Sue Maclennan.
“The true measure of any society can be found in how it treats its most vulnerable members.”
– Mahatma Gandhi

A possible link between deaths at Tower Psychiatric Hospital in Fort Beaufort and poor maintenance of patients’ physical health would carry serious implications for management, professional body SASOP has warned. Meanwhile, public service watchdog PSAM has called for a thorough investigation of the hospital by the Public Protector. Kathryn Cleary reports. The crisis at Tower Psychiatric Hospital in Fort Beaufort could be a bigger problem than Life Esidimeni, South African Society of Psychiatry (SASOP) President, Professor Bernard Janse van Rensburg, told Grocott’s Mail this week. “It is occurring within a facility that has professional staff, not in NGOs without professional staff like Life Esidimeni,” Janse Van Rensburg said in an interview on Monday 26 March.

The story so far

The media release followed an announced visit to Tower Psychiatric Hospital in Fort Beaufort by members of SASOP, the Treatment Action Campaign, South African Federation of Mental Health and Rehab EL on 6 March.

This was in light of claims made by former Tower psychiatrist, Dr Kiran Sukeri.

An exposé in City Press and Rapport on 4 March 2018 presented shocking images of an isolation room at Tower Psychiatric Hospital in Fort Beaufort. Sukeri spoke out about the alleged degrading and inhumane treatment of patients and claimed death registers had been altered, meaning an alarming number of patient deaths at the hospital in recent years had gone unrecorded.

Sukeri’s claims were refuted by the Department of Health in the Eastern Cape.

SASOP compiled a full report and submitted it to the Department of Health on 19 March. The report highlights examples of alleged mismanagement and poor patient care. One example is of a patient who was meant to be in seclusion for two hours, but was allegedly in the room for seven days.

The report concludes with 15 recommendations to address issues faced by both Tower and the Province.

“We regard it as fairly serious and fairly urgent in context of what happens in Tower Hospital,” said Van Rensburg.

The Society’s core findings at Tower include the lack of an efficient discharge programme, the alleged mismanagement and disorganisation of hospital records, and the inhumane use of seclusion rooms.

Detailed in the Society’s press release are two interventions at Tower by the Department of Health. Van Rensburg said both had been in the past two years, and related to “communication and relational issues” with the hospital’s discharge policy. While staff had wanted to discharge patients, management had disagreements.

“It relates to admission criteria,” Van Rensburg stated. In order for patients to be admitted there must be available space. Tower is a 400-bed referral hospital that accepts patients from all over the Eastern Cape. Should the hospital be unable to admit patients, there is a severe backlog across the province. Van Rensburg highlighted that the discharge issue is particularly challenging in terms of “non-voluntary and long-term” patients, some of these “forensic”.

“This is a whole and integrated problem,” said Van Rensburg.

The Society deals with this concern in recommendation 7.13 of its report: “A review of the hospital’s mandate, appropriate admission guidelines and discharge protocols must be undertaken in the context of the policy of appropriate deinstitutionalisation.”

In terms of hospital records, SASOP reported that they were shown handwritten and incomplete records.

“These were a bit concerning” stated Van Rensburg.

“On 6 March [handwritten]books were the main source of information.” SASOP and other visiting parties were told that management was working on an electronic system including spreadsheets but “were not able to refer to a source as yet”, said Van Rensburg.

How many patients have died at Tower since 2010?

Sukeri claimed in Rapport’s article on 4 March that there were severe inconsistencies in Tower’s death registers since 2010 – including missing registers.

Sukeri’s standing claim states a total number of 90 deaths from 2010 through January 2018. This information has not yet been confirmed.

In an article previously published by News24, Eastern Cape Department of Health Spokesperson Sizwe Kupelo, rubbished this claim. Kupelo stated that the revised figure from 2010 through 2017 was 63. SASOP’s report states that this figure relates to years 2013 through 2017.

Should Tower receive an inquiry for any records, failure to provide such documentation could result in litigation, Van Rensburg said. If there were “incompleteness and discrepancies, [and]if there would be an inquiry”, it would constitute litigation.

Section 70.1(a) of the Mental Health Care Act states that anyone who “misrepresents a fact in any application, report, record, certificate” is subject to conviction, fine or punishment.

How do the seclusion rooms work?

With regard to seclusion rooms, SASOP urged Tower management to halt their use with immediate effect on 6 March. “We were under the opinion that it would not be safe [to use those rooms],” stated Van Rensburg. He further emphasised that the issue was about patients being “safely and lawfully” placed in those rooms.

On 16 March, two Grocott’s Mail journalists visited the hospital and reported that two of the seclusion rooms in ward 6B were empty, whereas at least one other was equipped with a mattress, linen and a pillow.

CEO Ntombizandile Ngcume told the journalists that “the patients that are there in the single rooms wanted to be there”.

“A staff member indicated that during the seclusion of the patient who had been put in [a]seclusion room a week or so before the [6 March] visit, he had set himself alight and sustained injuries to his lower extremities. This turn[ed]out to be the patient who was in seclusion without doctor’s orders.”

Grocott’s Mail confirmed this recent case of a patient setting himself alight with Nehawu chairperson, Lawrence Mtsila. A former hospital board member also told Grocott’s Mail in an interview 16 March that Ngcume “refused that a patient was burnt in [the]hospital”.

“These are very high-risk [areas]with inhumane conditions due to lack of ablution and access to a water source. The door is bolted from outside once the patient has been put inside the seclusion room and he/she has to rely on others to exit when requiring access to a toilet or a drinking water source.”

In SASOP’s press release Van Rensburg stated that the rooms “seem to have already been precipitating incidents of harm to and human rights abuses of patients”.

“People don’t die from psychiatric conditions,” he told Grocott’s Mail, but rather as a result of poor physical health.

“There need to be regular physical check-ups”, he said.

Van Rensburg further highlighted a possible link between Tower’s death numbers and poor maintenance of patients’ physical health. He added that such a link might hold both professional and legal implications for management.

Could it be worse than Life Esidimeni?

Van Rensburg said SASOP had visited Tower with the Life Esidimeni tragedy in mind. “We had to keep in mind questions like, ‘Even if you knew you might have been punished, why didn’t you do more?’”

At this point SASOP has not found anyone to be deliberately responsible for the issues highlighted at Tower. SASOP further believes that overall, Tower management have good will towards patients. The main cause of this crisis? Tower’s shortage of professional staff.

Currently, the hospital does not have a psychiatrist and only has one medical doctor, the clinical manager.

The Director of public service watchdog PSAM, Jay Kruuse, told Grocott’s Mail, “In a case such as this, the questions that need to be answered are: who carries a responsibility? And have they carried that out? They either fulfill a responsibility or they don’t. And, if the health service is compromised then they need to be investigated.”

PSAM has called for a thorough investigation of Tower Hospital by the Public Protector.

Kruuse also said that the MEC’s task-team investigation was not sufficient.

“To allow the provincial department to investigate where there are parties implicated in that department will not result in the matter being investigated thoroughly in PSAM’s experience. That should happen as a matter of course.”

The findings of the MEC’s two-week long investigation are to be released 29 March.

PSAM further called for the investigation of statements made by Department of Health spokesperson, Sizwe Kupelo.

“There is a glaring contrast between the position as stated by him and the views advanced by SASOP and other parties who have gone on record, including trade unions. The department must investigate those glaring contradictions, and Sizwe Kupelo must be asked to appear before an inquiry to explain his position.”

Kruuse added that information not only suggests the irresponsibility of public servants, but that they are “actively seeking to present a picture” that argues otherwise.

“That cannot be tolerated”, he said.

“We have had the events at Life Esidimeni, which culminated in the deaths of hundreds of people, and we cannot allow that to be repeated in a facility such as this.”

Kruuse quoted Mahatma Gandhi: “A nation’s greatness is measured by how it treats its weakest.

“People who are submitted to these facilities are often in need of critical care and we cannot have a department providing these levels of service without serious consequences for those that are implicated.”

“That should extend beyond disciplinary hearings, to criminal action, where the evidence supports such a course of action,” Kruuse concluded.

Other recommendations from SASOP’s report include: “The problems at this hospital must be considered within the context of the whole system of mental health and psychiatric care services and facilities in the Eastern Cape.” (recommendation 7.14)

The report also recommends the retraining of staff to ensure adequate knowledge of patient rights and patient advocacy.