Celebrating the voices of Grahamstown – Masicule! 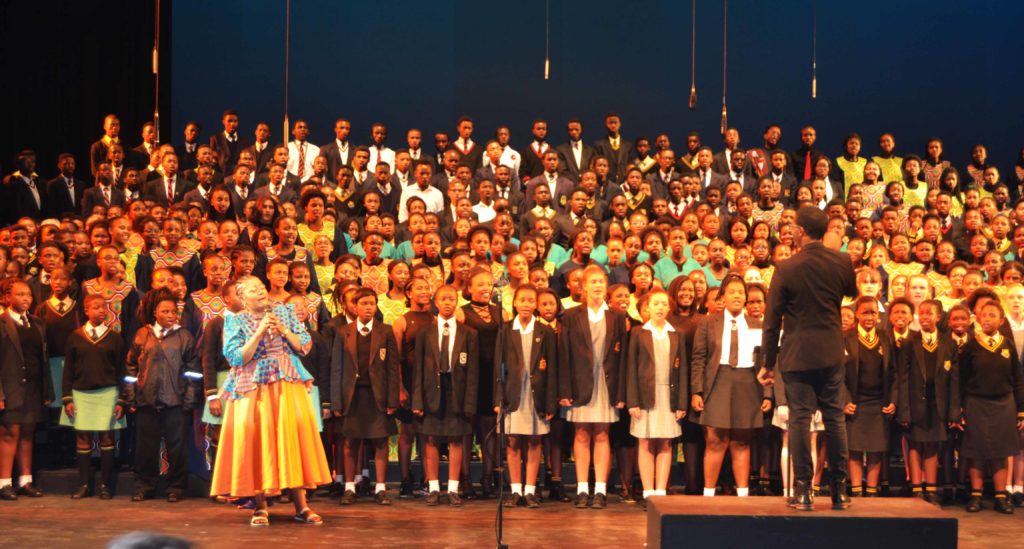 Khumalo is the most celebrated member of a musical dynasty marked by an extraordinary vocal gene-pool and passion for making music. In 1993, Khumalo won the Standard Bank Young Artist Award at the National Arts Festival. In 2009, she was honoured by Rhodes University, by being awarded a Doctor of Music honoris causa.

Masicule 2018 brought together nearly 1000 choristers from over 15 choirs on to one stage and the programme was directed by a local comedian Tsepiso Nzayo. The event opened with the Massed choral item Yele, yele, Masicule conducted by Loyiso ‘Bhoki’ Saki. It is a song that makes one feel the presence of heaven on earth.

Dr Sibongile Khumalo closed performances with the Grahamstown massed choir, singing a piece by her and Motsumi Makhene, titled Sabela’ and U ae kae by Joshua Pulumo Mohapeloa.

Just before we thought we were done for the night on Sunday, surprisingly, youngsters Xolisa Foley and Junaid Douglas duoed with the Grahamstown Massed Choir with Happy by Pharrell Williams.

To tilt my cap for the concert, the lighting was superb and we can never shy away from the arrangement by Gareth Walwyn. The band was from out of this world. The event was perfectly organised by the production team, and as for the rants, you will find them from Festival CEO Tony Lankester’s Facebook profile.

Monsters taking advantage of the dark