Makana sure ain’t the Marico 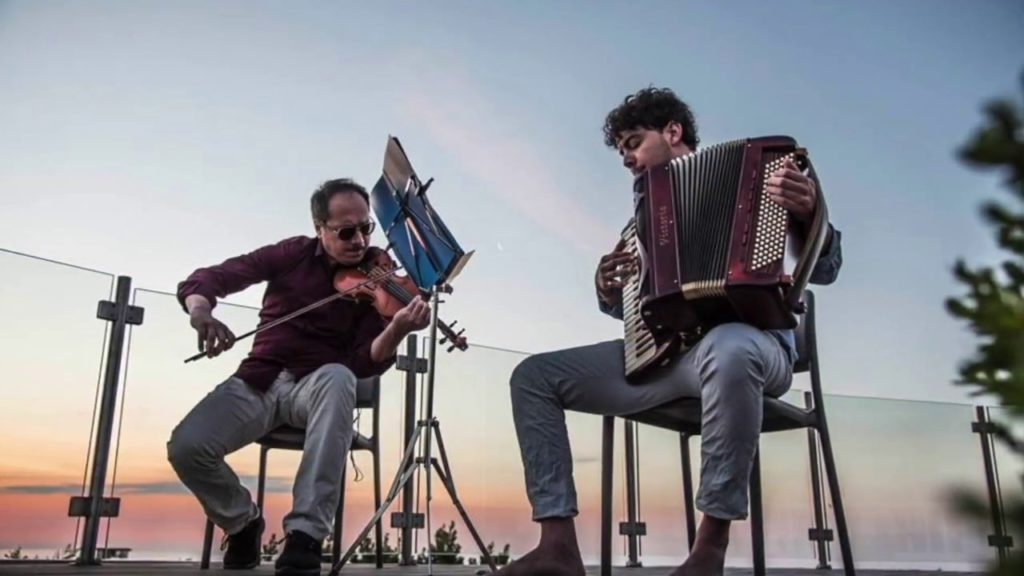 It is heartening when excellent performers enjoy the experience of playing in the National Arts Festival enough to want to return.  Italian virtuoso violinist Luca Ciarla played to great acclaim in the 2011 and 2014 Festivals and was happy to come back as a contributor to the Grahamstown Music Society’s 2018 concert season. This time he brought with him his compatriot Nino de Luca, who is one of the world’s finest accordion players.

Before Thursday’s concert I did not know what to expect, having heard the accordion played seldom, and usually not very well. Many years ago someone drifted from the street into a restaurant where a number of us were dining, and played his accordion, going from table to table. He was generously paid by one of the diners to STOP. There were also some negative associations with a related instrument, the concertina, as I remembered Herman Charles Bosman’s tale about Manie Kruger (The Music-Maker), whose audience’s tastes did not range much beyond Vat Jou Goed en Trek, Ferreira. On top of that, I was unsure how the combination of accordion and violin would work.

The performance turned out to be a wonderful surprise. The blending between the instruments sounded effortless, and at the same time each player seemed free to express his individuality, not only in the solo items, but also in the duets. I have heard some excellent violin playing in my time, and on Thursday I was not disappointed. As for the accordion, I had little idea how versatile it can be. Naturally, this requires great talent and years of training, and it helps to be highly proficient in other instruments too (in this case, the clarinet). When I closed my eyes, I could have sworn I was hearing not just woodwind and brass, but even strings. And together the different musical voices spoke with an independence that I had not believed was possible on an instrument of that kind. On the violin Ciarla also worked his magic, with a dexterity that at times seemed to defy the laws of physics, and multiple “looping”, which meant that he himself was simultaneously playing every part in what was in effect a string ensemble.  In spite of the illusion (sometimes) that there were many players, the music was never too loud. Often it was like one of my favourite experiences of a large, live symphony orchestra: the restrained power of eighty-or-so artists playing pianissimo.

A glance at the composers listed in the programme might suggest that it was restricted to western music of the 20th and 21st centuries, but this would be misleading, since there was much material here from all over the world, as well as from different periods.  It is refreshing that Ciarla and de Luca do not see themselves as confined to a particular period or genre or continent.  Nor are they only performers: much of what we were hearing had been composed or was being improvised by them. A suggestion, though, for their future concerts is that they provide some written notes about the composers: Piazzolla would have been familiar to many of the audience, but probably less so Morricone or Bacalov.

When poor Manie Kruger “decided to become the sort of musician that gets into history books”, his Marico audience lost their enthusiasm for his playing, and he despised them all for being such philistines. On the contrary, Grahamstown’s audience last Thursday seemed to love it all, including its sophistication. Witty musical quotations from Bach and Bizet produced some chuckles. And right from the start the musicians were well disposed towards the audience, and most gracious in thanking by name those people whose hospitality they had enjoyed.

The good acoustics and comfortable seating of the venue would have enhanced the listeners’ pleasure. Attending a concert in NELM is like flying business class. Actually, it’s better. In addition to your having a large and comfortable seat with plenty of leg-room, the in-flight entertainment is live, and will transport you to the magic places of your imagination and beyond.