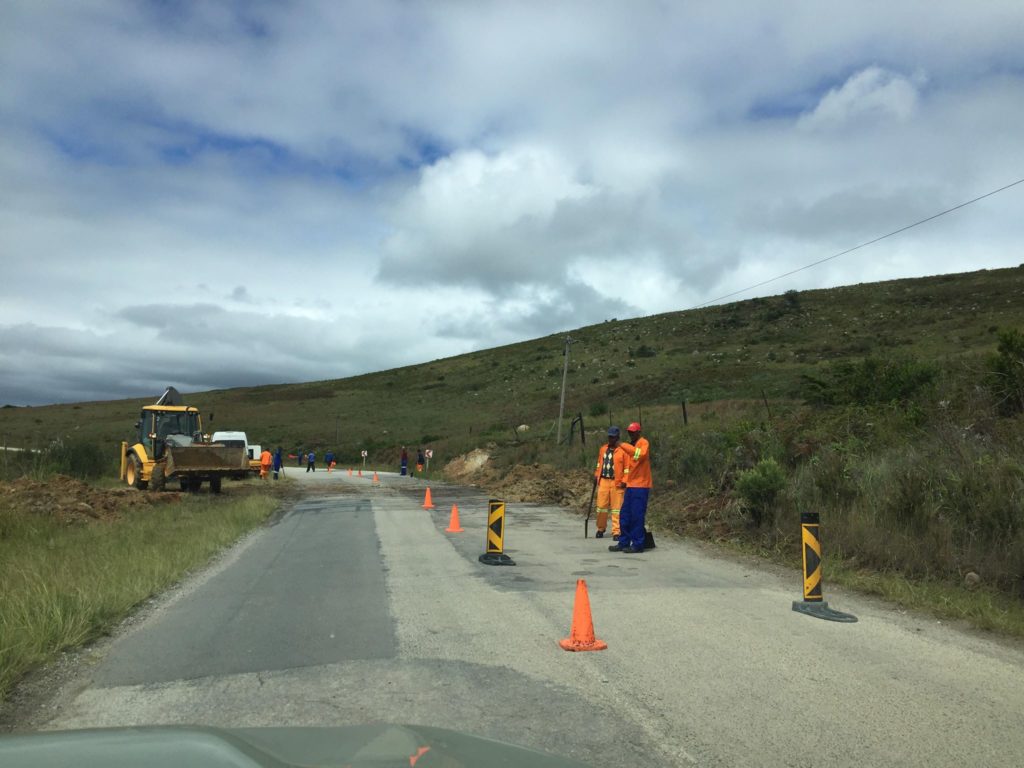 A team from the Provincial Roads and Public Works Department repairs dangerous potholes on the R67 between Grahamstown and Stones Hill. Last week a vehicle overturned when a driver tried to avoid a large pothole. Photo: Dominic Thorburn

The Eastern Cape’s Department of Roads and Public Works has undertaken to repair dangerous potholes on the R67 between Grahamstown and Stones Hill, according to Chief Traffic Officer and acting manager of social services in Makana Municipality, Coenraad Hanekom.

This comes after a vehicle overturned after the driver tried to avoid a large pothole in wet and misty conditions early last Friday.

Hanekom said the driver lost control of the vehicle and that no injuries were reported.

The incident and subsequent repairs follow long-running concern about the hazardous section by residents who commute on the route daily.

Suzanne Wille, who owns a B&B in Stones Hill, expressed concern on Wednesday that the “crater” opening up on the road needed urgent attention.

Stones Hill resident Dominic Thorburn said, “The general condition of the road is appalling despite signs that a contractor (tenderpreneur?) was appointed more than a year ago. Very poor to non-existent road markings and speeding through Stones Hill continue to be an issue – with a serious accident last week at Fairburn and the Southwell turnoff.

“Some years back we organised a meeting with the local authority to discuss these issues and some new signage and speed limits were changed (later reversed).

He said it was time for traffic-calming measures in the area.

“We are also regularly almost taken out by cars speeding round the corner on the other side of Stones Hill,” he said.

Another resident said cars came around the corner towards Port Alfred so fast that often the wheels on the right side lifted off the ground.

Hanekom confirmed that the road falls under the authority of the Provincial Roads and Public Works Department.

Previous ArticleHERO OF THE WEEK: Rhodes Archery EC Champions
Next Article My Garden