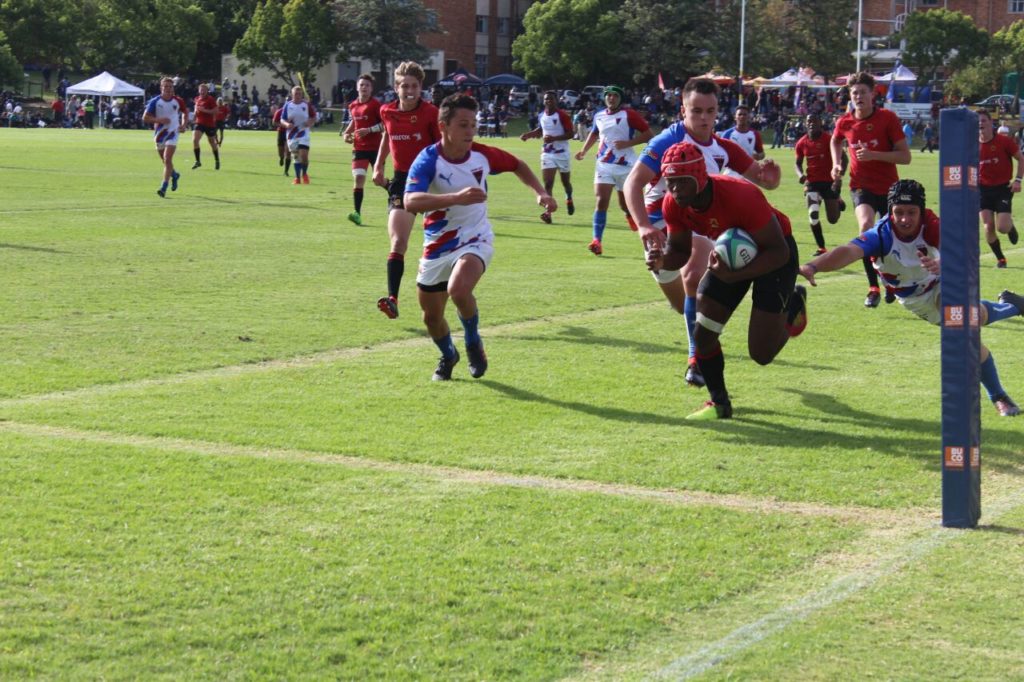 A speedy breakthrough run from Kingswood, past Hudson players who struggle to regain possession of the ball, allowing Kingwood to score. Photo:

It was a glorious day for Graeme’s annual rugby day which took place on Saturday 24 March. It marked the rugby day’s 20th year and it went down very successfully. After an exciting morning of fixtures, the three local schools played throughout the afternoon.

St Andrews got the action underway against Hudson Park High, who really brought the game to SAC. For the first few minutes, the action was tight but Hudson broke the deadlock through a converted try. St Andrews kept threatening and eventually Christian Roebert went over the line to get SAC on the scoreboard, but it was Hudson who kept the lead, 7-5 at the break. In the second half, St Andrew’s went into the lead for the time in the game, through a penalty kick. Murray Wilson converted 2 very swift and well crafted tries, to take the final score to 22-14. Coach Andy Royle said post-match, “I am happy with the win and looking very forward to the upcoming season.”

Kingswood kicked off against Framesby in the next match, coming off a strong 66-3 win against Muir College the previous weekend. Framesby pushed hard and heaped pressure on Kingswood early on as they scored a converted try. Anele Makongolo put Kingswood on the scoreboard through a penalty kick, however Framesby extended their lead to 19-3 after breaking Kingswood’s defense to score 2 quick tries. Kingswood bounced back after a lot of attacking play to score their first try of the day. Shortly after, Athi Galada burst over the try line in the corner after a magnificent run and good team play. With the score at 19-13, Kingswood’s hope for a comeback victory were dampened when Framesby converted a penalty, making the final score 22-13. Jonathan Mallet, coach of Kingswood 1st XV mentioned “struggling to execute what was practiced against a good Framesby side” but is looking forward to the upcoming season.

The main game of the day belonged to Graeme College and Grey High. Grey, attacking hard, found no way through a solid Graeme defense, except over the poles as Grey’s Matthew Easton put the team ahead, 3-0 in the first 10 minutes. Soon after, Grey scored 2 unconverted tries after a mountain of pressure was heaped on Graeme. Soon after, however, Graeme’s Dylan Rielly put the home side on the board which took the score to 13-5. Graeme’s hopes grew as they started to build momentum, but Grey stole the show as they extended the lead through 3 converted tries. Grey saw the game out to a final score of 34-5.

From the day throughout, it was s great success and there is plenty of enthusiasm in awaiting both the upcoming seasons of each team In Grahamstown and also, the 2019 Graeme rugby day.