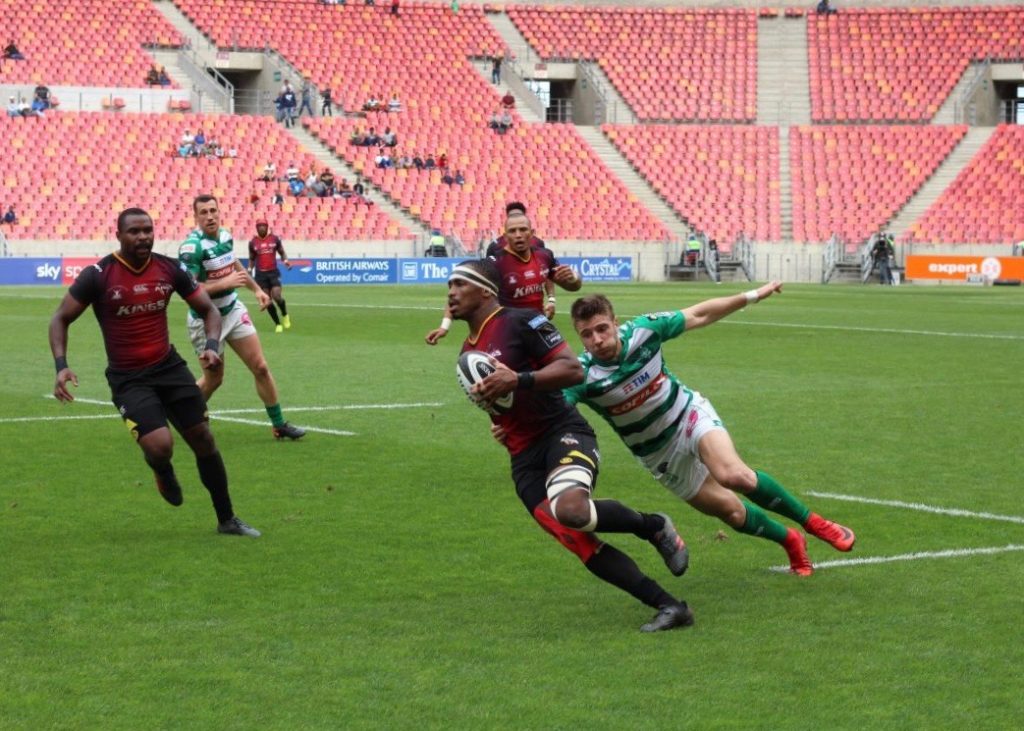 Saturday 24 March saw the Southern Kings host Benetton Treviso in round 18 of the Pro14 at Nelson Mandela Bay stadium. The Kings were looking for their second win of their debut Pro14 season against their historically weaker Italian opponents.

Both teams came out firing in the first half, as both teams crossed the whitewash early. Benetton scored two early tries, with Tomas Baravalle and Marco Lazzaroni crashing over in the first 7 minutes, only one of which was converted by Marty Banks. The Kings fought back, with Grahamstown’s own Luzuko Vulindlu crossing over for the home side on the in the 10th minute. Kurt Coleman would convert, to tak the Kings 7-12 behind.

Both teams soon settled into play, with the next break coming from the King’s fullback, Masixole Banda. After a great run from him, and a few more phases, Godlen Masimla managed to cross over for the home side. Coleman made no mistake with the boot. The visitors struck back immediately, through Banks, who scored out wide and converted his own try.

The visitors continued to dominate the play for the remainder of the first half, scoring through Tommaso Iannone, on the 30th minute, which was converted by Banks. With 7 minutes left in the half, the Kings were dealt a further blow, when Coleman was stretchered off with a presumed leg injury, while trailing by 14-26.

Despite this setback, the Kings managed to finish the first half on a high note, when Ruaan Lerm crossed over with the help of the rest of the forward pack. Masixole Banda took over the kicking duties from the injured Coleman, and made no mistake in with the boot. As the half time hooter sounded, the Kings trailed by 21-26.

Both teams were a lot more reserved in the start of the second half, as they played more tactical and positional rugby. The Italians slowly started to open the Kings up as the second half continued, opening the scoring through a try by Braam Steyn, which Banks converted to extend their lead.

The Kings were awarded a penalty try after a period of dominant play within the visitors’ red zone. Benetton’s ill-discipline cost them after they were forced to defend for a prolonged period of time as Frederico Ruzza was given a yellow card for collapsing the maul that resulted in the penalty try.

The discipline of the home side was called into question a few minutes later, however, and Benetton was given a penalty right in front of the poles. Banks took the easy three points to take the lead out to more than one score.

The Kings would not be kept down, and after applying severe pressure to the Benetton line, Berton Klaasen smashed his way over the line. Banda continued his recent kicking form to convert and take the game back to one point with just seven minutes left on the clock.

Benetton yet again put the home side under pressure, forcing the Kings to into ill-discipline. Replacement hooker, Tango Balekile was shown yellow for a desperate high tackle in mid-field that stopped a promising attack. Five minutes later, the Kings were unable to get possession back from the ruck, and the referee called full time. The final score read 35-36 in favour of the visitors.

After the match, Benetton coach Kieran Crowley said, “it was a game that could’ve gone either way. From a defensive point of view I think both teams won’t be too happy.”

Crowley was empathetic towards the Kings, understanding the hardships they have had to overcome over the past season. “[The Kings] had a massive season, going from Super Rugby straight into Pro14. They lost quite a few players and didn’t have a proper preseason. They’ve got a good backline, with people that can really move and they move the ball well, and I think they’ll always be a challenging team.”

Southern Kings’ head coach, Deon Davids, was understandably disappointed with his chargers’ performance. “You can’t start any rugby game like that. I’m disappointed with the result, I feel like we let ourselves down and were beaten by ourselves. We put ourselves under tremendous pressure by not kicking the ball out. However, I think Coleman controlled the game well before his injury.

Davids believes that the processes that they have put forward are right, but feels that the individuals need to step up and take responsibility for their play. “We just have to fix the attitude and keep on working on the individuals and their fundamental skills. There’s nothing that we did on the day that we don’t address [at practices]. I think the individuals just need to assess their contributions on the field.”

The Kings will have a bye weekend over the Easter weekend, before travelling to George to take on Irish powerhouse Munster at the Outenigua Park. Davids said about the trip, “George is always a very nice place to play rugby, its got a special environment. I think the people will come through in their numbers to see some of the Irish internationals play.”