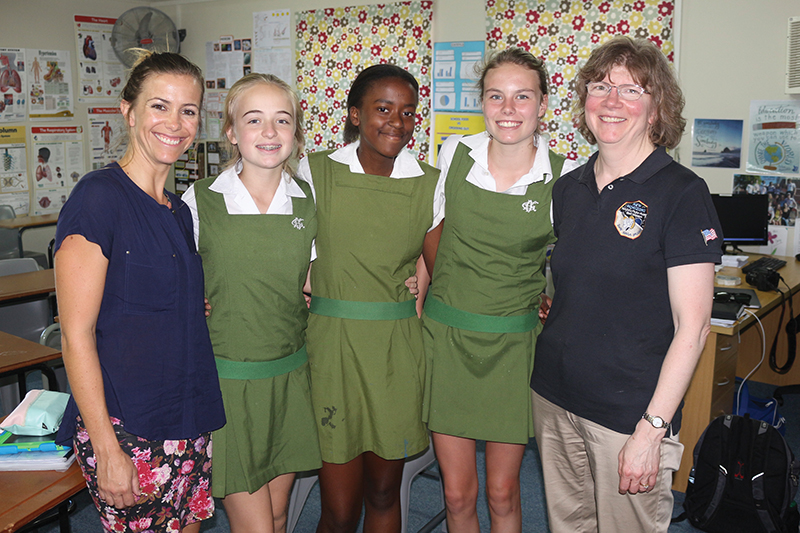 Dr Anne Verbiscer, a scientist from NASA, spent Monday and Tuesday at St Andrew’s College and DSG, addressing science classes and each school as a whole. Dr Verbiscer is an Associate Research Professor in the Department of Astronomy at the University of Virginia and she worked with data from the Cassini Mission exploration of Saturn from 2007 until it ended in September 2017.  She is currently working on the science team for the New Horizons mission, which is exploring the Pluto system and Kuiper Belt beyond.

In her address to the whole school, Dr Verbiscer told the story of how the New Horizons mission has revealed details about the surface of Pluto and its moons.  The space craft, having orbited Pluto is now continuing towards the Kuiper Belt beyond Pluto and is due to pass the Kuiper Belt Object named MU69 on 1 January 2019, to reveal more about this planetary body and its surface.

Dr Verbiscer was accompanied by Sam Chevalier (OA 2008, Merriman).  Sam met Dr Verbiscer when they travelled to Patagonia in 2017 to document the planetary event called a stellar occulation, when MU69 passed in front of a distant star, blocking its light from us.  Sam wanted the boys and girls to hear Dr Verbiscer’s stories and discover that science could provide adventure and opportunity beyond the laboratory.  Sam’s initiative, a company called ReWild, tells stories through film to promote awareness and empathy.

Previous ArticleSomerset Place RVs thank you
Next Article Who must provide the rainwater tank?