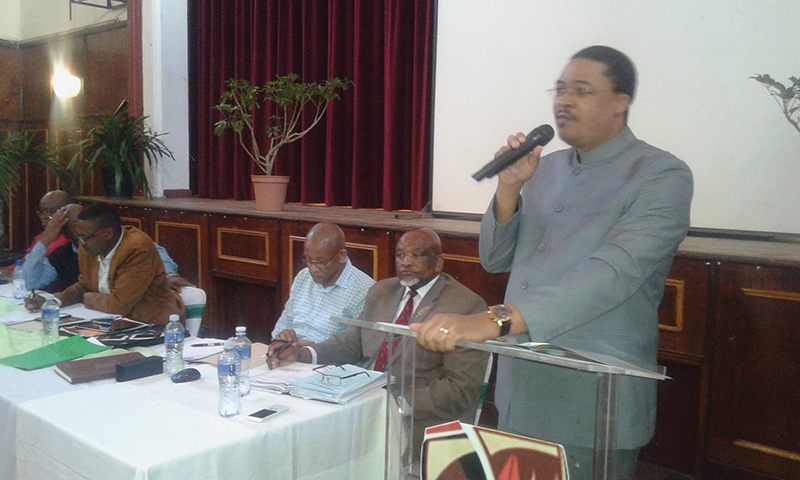 Emerging farmers in Makana took full advantage of an opportunity meant for them to interact directly with Qoboshiyane during a visit meant specifically for Grahamstown emerging farmers on Tuesday. The MEC was in Grahamstown on Tuesday, 19 March to listen to their concerns.

During the visit the MEC was flanked by top departmental officials who were there to answer questions that were posed by the farmers. Some of the challenges raised by the farmers included rampant stock theft, lack of funding and support and the lack of water due to the drought.

The MEC was clear that he would do what he could to assist the farmers, but said he wouldn’t commit to things that his department couldn’t do. Qoboshiyane encouraged the farmers to step up their farming techniques and be innovative.

The MEC urged local farmers to think of local markets and work around their needs. He pointed out some positives in Makana, saying that the chicken abattoir in the industrial area had potential to be a significant economic driver for farming in Makana.

He said the abattoir boasts state-of-the-art equipment and production houses which could house about 3 000 chickens per production cycle. The farmers were generally pleased at the news that lease agreements were going to be extended by up to 30 years. The MEC said longer lease agreements would go a long way in helping farmers to secure funds from banks.

The MEC told the farmers that Eastern Cape Premier Phumulo Masualle had officially declared a state of disaster in the drought stricken province. “Drought has been declared and all that’s left to be done are calculations in terms of the available budget. After this meeting there must be clear guidelines as to what needs to be done in Makana,” Qoboshiyane said.

Gcobani Dyantyi from the Makana Emerging Farmers Association said they had invited the MEC to Makana because of their challenges.

Dyantyi said one of their biggest challenges was the lack of water due to the drought. “We have lost livestock as a result of this drought. It has impacted very negatively on us,” he said. Dyantyi said their problems were exacerbated by the fact that their boreholes don’t work and the low levels in nearby dams. Dyantyi also pointed out that agricultural development was non-existent in Makana. “We only see things like processing and abattoirs on TV,” he said, adding that stock theft was rife in Makana and very little is done about reported cases.

Councillor Ramie Xonxa who was chairing the event said farmers were important stakeholders of the municipality. “Agriculture creates jobs and chases away hunger. We need productive and sustainable farms,” he said.

Makana Municipality’s Agriculture and Rural Development Manager Phiwe Gqweta who was at the meeting with her team said it was a success for farmers in Makana. “The MEC outlined their programmes and emphasised the importance of them working together. He also encouraged them to treat farming as a business,” she said. Gqweta said the presence of the MEC in Makana has injected confidence into the emerging farming community of Makana.

“They came out of that meeting very excited and highly motivated. Their misery was wiped out by specific agricultural activities that each and every farmer should be embarking on,” she said.