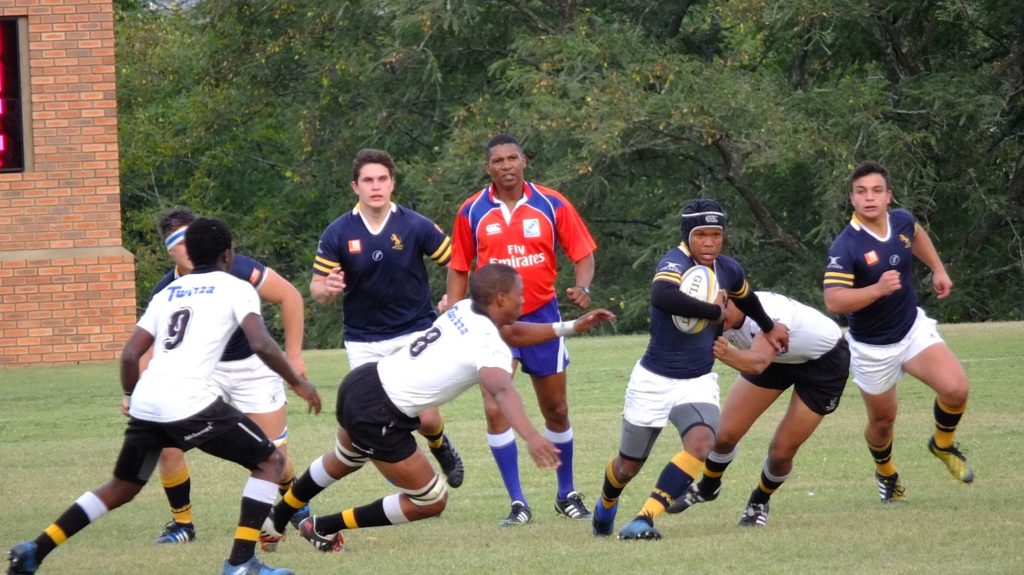 Graeme College fullback Eldrico Kivitts goes on the attack during their schools rugby clash against Queen’s in Grahamstown last year. Kivitts will be part of this year’s squad playing in the Pam Golding Properties Graeme Rugby Day on March 24. Photo: Supplied

With all the the Eastern Cape’s leading schools involved in this popular event, the hosts have put together a smorgasbord of matches right from U14 level to the first teams to sate the appetite of every schools rugby fan.

Graeme have not shied away from the tough challenges in this year’s festival, as they have scheduled themselves to face Grey High in the main match of the day. The match is scheduled for a 16:10 kickoff on Graeme’s Somerset field.

These two schools produced a thoroughly absorbing encounter when they met in Port Elizabeth last year. Despite Graeme giving one of their best performances against their PE opponents in recent years, they finally went down 22-15 against Grey.

With Grey a perennial powerhouse in the region, this should prove another fascinating showdown as the Grahamstown lads strive to prove a point. That, though, is just the final course in the programme and there is something for everyone during the day.

Starting with what should be an interesting test for Pearson against Muir in the festival’s opening game. After their outstanding season last year, when they were unbeaten against Eastern Cape opposition, much attention will be on St Andrew’s when they take on Hudson Park. This is one of several cross-border clashes which litter the programme as EP schools get a chance to take on their East London rivals.

Known for their running brand of rugby, St Andrew’s are sure to be a handful for the Hudson outfit. A second top regional clash will see crack Uitenhage side Brandwag take on Queen’s. The former will need to be on guard against a unit capable of playing an all-round game based around energetic forwards and exciting backs.

Another team which never fails to excite with their three-quarter play are Dale and they should provide a tough examination for Humansdorp outfit Nico Malan.

Marlow have often played Grey in this tournament, but this year they will have a fresh challenge. It doesn’t get much easier for the Karoo team, however, because Selborne aren’t a side to be taken lightly. But the Cradock outfit are great scrappers and their team unity and commitment see them regularly punch above their weight.

The main curtain-raiser will provide another Grahamstown-PE showdown and Kingswood will have their credentials thoroughly examined by the always competitive Framesby side. Besides the action on the Somerset field, a further 15 games, which also involve U14 and U16 teams, will be played on the Marais A and B fields.