Ndwayana ready to take on Memela 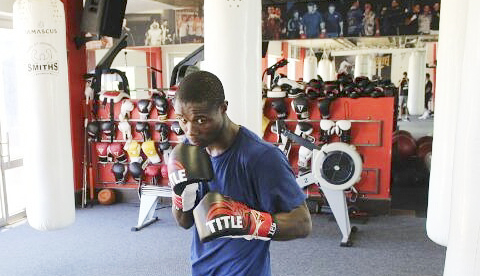 Mzoxolo Ndwayana is hard at training preparing for his next fight on 30 March at the Orient Theatre in East London against Ntuthuko Memela from KZN. Photo supplied

Our very own professional boxer and champ Mzoxolo Ndwayana is hard at training preparing for his next fight on the 30th of March at the Orient Theatre in East London against Ntuthuko Memela from KZN. The two boxers will exchanging blows in an 8 rounds welterweight contest.

Ndwayana left Grahamstown four months ago to join trainer Saun Smith in his gym in pursuit of his dream of becoming the SA champ. Ndwayana says it was never an easy decision to leave his home town but had no choice as he felt that there were no opportunities here. He also stated that he felt that he was not appreciated here as he struggled to secure sponsorships and had nothing to show for his efforts.

Other boxers are well appreciated by their municipalities they get help with things such as houses, transport, nutrition etc but that was not the case in Grahamstown. Speaking about the upcoming fight, Ndwayana said, “I have trained very hard for the fight and I am ready as always for this fight and do not know much about my opponent except that he is a southpaw. Anything can happen in this fight and I have prepared to go for the full eight rounds but if an opportunity comes up to stop him I will grab it with both hands”.

Ndwayana also thanked all his supporters here in Grahamstown and said they must feel free to interact with him on facebook. He also encouraged other boxers in Grahamstown and Sarah Baartman region not to give up no matter how hard the situation is. Ndwayana’s last fight was on the 8th of December last year where he defeated Uyanda Nogogo of East London on points.