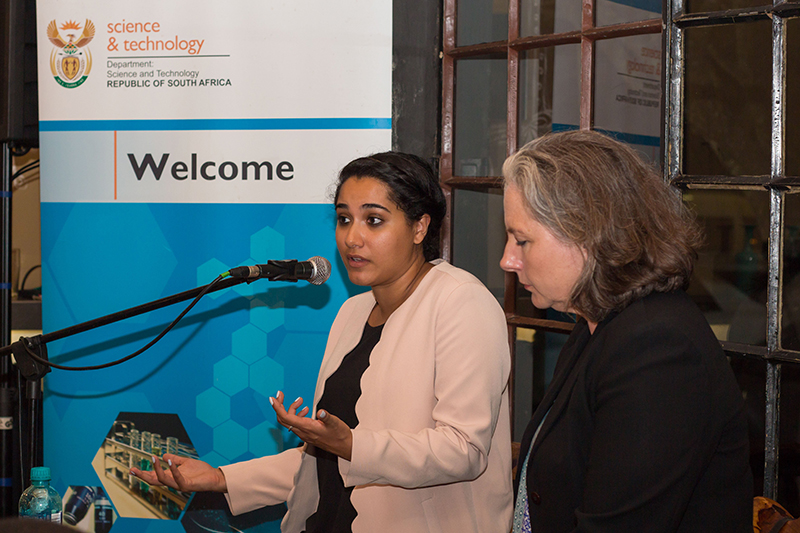 Dr Komal Kumar with Jayne Morgan at Saint's Bistro on Wednesday night, in 'In Conversation with...' - a chance for audiences to meet scientists in a relaxed setting suring Scifest Africa 2018. Photo: Michael Salzwedel

Khanyisa High School pupils welcomed Dr Komal Kumar with enthusiastic singing at the start of her lecture on organ donations for patients living with HIV.

In her Scifest talk, titled Organ donations, transplantation, and little bit of HIV, Kumar, who is an epidemiologist at the Johns Hopkins Hospital in Baltimore USA, described her field as the study of populations. At the heart of her work is HIV-to-HIV kidney transplantation.

Only six of our many organs are transplantable with kidneys being highest in demand. Currently this demand outstrips supply. One person is added to the Johns Hopkins donor waitlist every 10 minutes. There are two types of donors – living and deceased, with the latter reportedly saving up to eight lives.

When South Africa faced HIV denialism between 2006 and 2008, Kumar said, people with the virus were developing kidney failure. Patients were not allowed dialysis and were stigmatised against getting any type of treatment. A mentor to Kumar, surgeon Dr Elmi Muller of Groote Schuur Hospital in Cape Town, performed the world’s first HIV-to-HIV kidney transplant in September 2008. “She couldn’t keep watching these patients getting turned away for what they couldn’t handle. She couldn’t keep watching them go home to die,” said Kumar.

The transplant was met with both hostility and criticism which opened up a lot of discussion. From 2008 to 2010 both the government and the hospital shut down her programme claiming she had made a rogue decision. Numerous disciplinary hearings tainted her medical records with black marks characterising her a bad person. During that period four of her patients died. Muller, at a challenging time in her career with the system against her, was quoted saying, “In a field where there are no clear guidelines, sometimes decisions are made on intuition.”

In 2012, Kumar and her colleagues at Johns Hopkins used Muller’s success story as a vital tool towards challenging the USA policy against kidney-to-kidney transplants between HIV patients. About 600 people die of HIV in the USA annually. The law advocating for this transplant was amended and signed off by President Barack Obama the same year.

Subsequently The Johns Hopkins Hospital collaborated with Facebook to create a platform where willing donors can update their information so as to reach out and help possible recipients.

Kumar has also developed the Donor app which is only accessible by a code from a registered doctor to help donors and recipients interact. “This app helps patients share a story and identify a donor on Facebook.” This is part of a regulatory measure to avoid cases of organ trafficking.