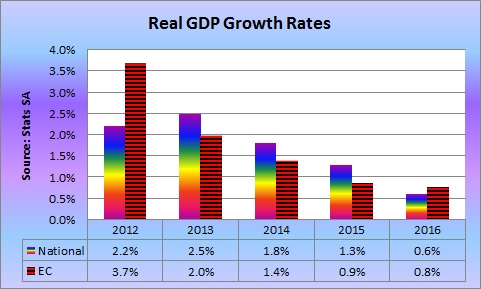 The reason for this outperformance was that the primary sectors of agriculture and mining only have a 1.9% share of the regional economy at market prices. The secondary sector of manufacturing, construction and electricity, has a 17.3% share with manufacturing at 11.4%, while the tertiary or services sector has a 70.1% share with government services responsible for 20.8% with taxes equivalent to a 10.7% share bringing it up to market prices. Economic growth forecasts for 2018 have been ratcheted higher as data exceeds expectations with the South African Reserve Bank (SARB) the latest central bank to raise its 2018 GDP growth projection.

The average forecast in the fourth quarter 2017 survey by the Bureau for Economic Research was that 2017 growth would be only 0.5% rising to 1.0% in 2018. Instead actual GDP growth in 2017 was 1.3%. This survey was however concluded on 5 December 2017, well before Cyril Ramaphosa was elected President of the African National Congress. His election has renewed optimism that growth could exceed 2% this year as former Finance Minister Malusi Gigaba said in East London in January.

This is especially so as economists are having to do the same catch-up in their forecasts for developed economies as shown by the consensus forecasts from UK-based Consensus Economics (www.consensuseconomics.com).   The US for instance has had its 2018 GDP growth forecast increased from 2.4% in August 2017 to 2.7% in January 2018, while Germany has moved from 1.8% to 2.3% over the same period. France has been upgraded to 1.9% from 1.6%, while Japan’s GDP growth forecast has improved from 1.1% to 1.4%. Only the UK has remained stagnant at 1.4%.

The stronger developed countries’ growth bodes well for South Africa growth prospects and further upgrades to 2018 GDP growth should be expected during the course of the year.