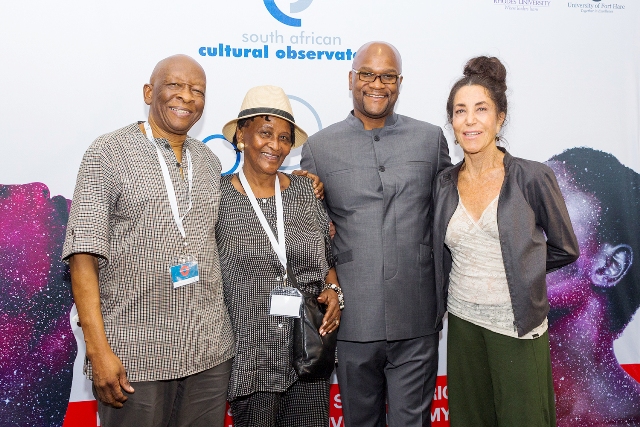 EMPLOYMENT, job creation and the transformative power of creativity were some of the key issues discussed on day-one of the South African Cultural Observatory’s (SACO) 2018 international conference currently under way at the Nelson Mandela Bay Stadium in Port Elizabeth.

Under the theme, Beyond the Creative Economy? Trends and Issues in National and Regional Economies, the cultural think-tank’s two-day conference is tackling big debates surrounding the current realities and future directions of the creative economy. It is interrogating the growing potential of the creative and cultural industries (CCIs) and arts, culture and heritage (ACH) sectors in South Africa and across the globe.

In his keynote address this morning Minister of Arts and Culture, Nkosinathi ‘Nathi’ Mthethwa emphasised the need to leverage South Africa’s creative capital to expand and deepen the country’s creative and cultural economy. This, he said, could potentially lead to the creation of millions of much needed jobs.

“Worldwide, the CCIs are increasingly attracting attention as drivers of economic growth, innovation, and job creation. A 2017 report by the World Economic Forum on ‘The Future of Jobs and Skills in Africa’ listed the creative industries as one of the ‘trending’ professions, which had an average growth rate of 7% between 2011 and 2016,” he said.

“Similar growth in South Africa at this level would support the National Development Plan’s aim to create 11 million new jobs by 2030.

He noted the results of a recent Cultural Observatory employment report which notes the CCIs directly contributed to over 2.5% of national employment, on par with the mining sector. However, the wider ‘cultural economy’ – including support services – accounts for far more.

“In 2015, the broader ‘Cultural Economy’, in all its facets, accounted for an estimated 6.72% of all employment in South Africa or just over a million jobs. This figure is indicative of the potential of our golden [creative]economy.

“But employment in the cultural sector is highly dependent on broader economic growth. Because of this, it is time that we started to look beyond the celebration aspects of arts and culture and shift our focus to a holistic socio-economic perspective,” Mthethwa added.

Expanding on the impact of cultural and creative employment in South Africa, Professor Jen Snowball, SACO chief research strategist and economics lecturer at Rhodes University and Serge Hasidi discussed the potential of the CCIs to become a key sector in economic development policies and a mechanism to promote social transformation in the country.

“Around eighty percent (80%) of those in CCI occupations are Africans, Coloured, and Indian or Asian.

More than half of all cultural occupations are held by men (57%). A much higher percentage of cultural and creative workers have tertiary education (38%) than non-cultural workers (19.4%).

“The results of the study show that South Africa’s CCIs make a significant contribution to employment in the country,” she said.

Dr Sipho Sithole, an award-winning producer and former Deputy Managing Director of Gallo Music Group, drew attention to the growing impact of the creative economy at a grassroots level though his discussion on Kwa Mai Mai, an informal trade zone in End Street in Johannesburg. This area has emerged as a dynamic and vibrant informal creative economy built by people from the margins of society who have embraced the opportunities of creative and cultural work.

“This is a multi-ethnic market of South Africans bound together by the spirit of entrepreneurship, creative innovation and a community at work. It is a trade zone of skilled craftworkers and artisans making anything from furniture, decorative arts, traditional garb, traditional jewellery, coffins, horse saddles, wedding kists to coffins, including traditional medicine,” he said.

“This is a place where culture, heritage and tradition, as championed by its inhabitants, converge and find its expression through the creative work and cultural expressions of migrant traders,” he said.

The conference pulled into sharp focus, the question of whether a career in the creative industries can present a solution to unemployment in South Africa and bring change to the country’s current economic and entrepreneurial landscape.

Andrina Moodley from Fort Network noted that since the removal of creative subjects such as arts, music, and drama from educational settings exposure to various careers within the creative fields has been limited.

She insisted that to see real and sustainable careers in the creative industries more emphasis needs to be placed on creative education and the skills needed to be competitive in the future workforce.

“By removing creative arts from schools, we are essentially crippling our workforce, and stifling the world of thinkers, makers and creators,” she said.

“Many people need to be trained on future skills, in order to future-proof their jobs and/or careers. These skills include complex problem-solving, critical thinking, and creativity.

“A recent survey showed that 93.2% of public high schools provide absolutely no cultural subjects to matriculants. This means the majority of public schools are producing learners deprived of any form of creativity,” she said.

She further insisted: “The root cause of unemployment is not only a lack of jobs, but an inadequately educated workforce. The arts present a valuable solution, as non-linear thinking, creative approaches, and problem-solving are the order of the day,” she added.

This project has played a pivotal role in local economic development, in advancing macroeconomic aims of government, as well as in promoting arts and cultural participation, thereby creating, and driving a virtuous circle of culture in Grahamstown

The role of the creative city

creative city and cultural and creative activities as the main drivers of economic and social development, and sustainability.

“Creative cities tend to have a high concentration of creative employment, and to attract inward investments, based on their established cultural scene,” he said.

Speaking about the Grahamstown Creative City Project, a National Arts Festival (NAF) initiative focused on developing local talent, promoting economic growth, and driving the creative sector Ndhlovu noted: “Under the Creative City umbrella, the NAF has launched several projects, directly aimed at boosting the local economy and promoting local talent. Some of these projects include city murals, Masicule choral concert, ‘Cinema Under The Stars’ movie showings, the Gruffalo Live on Stage, as well as a Visual Arts sponsorship project around various schools in the city.

“This project has played a pivotal role in local economic development, in advancing macroeconomic aims of government, as well as in promoting arts and cultural participation, thereby creating, and driving a virtuous circle of culture [in Grahamstown],” he said.

Discussions on the future direction of global and South African creative economies will continue in the second day of the SACO’s 2018 international conference in Port Elizabeth tomorrow.

Previous ArticleCulture, creativity the new currency – Mthethwa
Next Article Lighter side of science