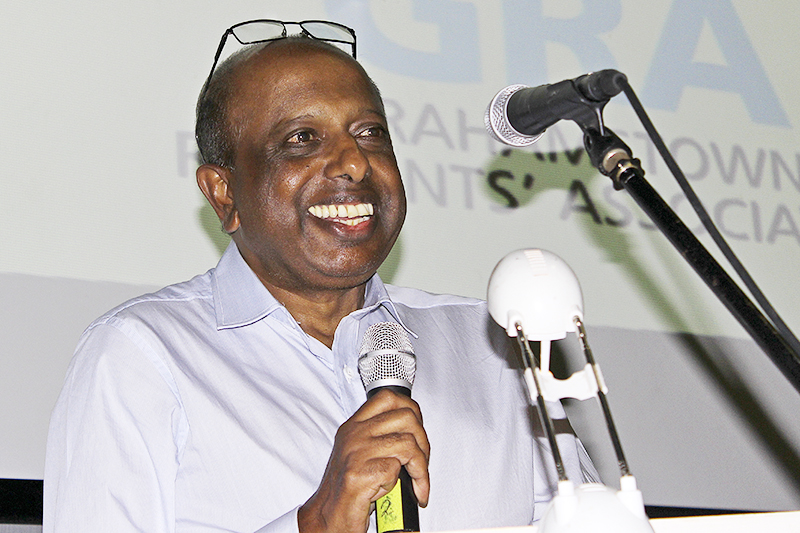 “If you are sleeping well, something is wrong: this town should be keeping you awake day and night.”

That’s what acting municipal manager Ted Pillay told Makana officials during his briefings during his first three weeks in Grahamstown, starting at the beginning of February. Pillay received a warm reception from an audience of around 250 Grahamstown Residents Association members and others, curious to see him in person and hear about his plan to turn around the embattled municipality.

Pillay said his own job was 24/7 and that his wife had for that reason accompanied him for his time here.

He received vocal support from the audience when he said he’d discovered none except one of the municipality’s senior officials lives in Grahamstown, that most go home every weekend, and that he’d instructed them to implement a duty roster that would mean at least one member of senior management would remain here to deal with possible crises that arose during “off duty” time.

In response to a question, Pillay weighed in on the name change, saying it didn’t matter what the town was called if water, sanitation and roads were not what they should be.

Pillay said extensive engagement with people on the streets across the town had confirmed that most residents in Makana were concerned with the management of water, sewage and rubbish. In his top five priorities for a turnaround to make Makana sustainable, he also included roads and electricity. “We need to get basic services right,” he said.

Within the reliable provision of water, drought planning loomed large, with less than 130 days to Day Zero at current rates of consumption.

The town’s eastern supply was being cut nightly to curb demand, which outstrips the supply from the James Kleynhans Water Treatment Works (10 megalitres a day) by up to 3ML. The good news, he explained to residents, was that the facility is being upgraded to process an additional 10ML daily, making the new combined facility capable of supplying 20ML a day. “That will be adequate for the entire eastern side of town,” Pillay said.

The western supply (the Settlers/ Howieson’s complex) was severely affected by drought.

“Even if we get R500 million it won’t help,” Pillay said. “We need rain. We have major water problems.”

He urged residents to reduce their consumption from the 100 litres per person per day stipulated by the restrictions in force, to 60 litres.

Pillay said he had begun a process to secure the services of a fulltime water engineer from the Department of Water and Sanitation.

“That has to be this town’s number one priority,” he said.

“What I’ve seen is frightening,” Pillay said, describing children playing in and around sewage-laden streams.

He reserved a special apology for the staff and children of Kuyasa Special School, which has been swamped by raw sewage pouring down from higher-lying areas, and said he had promised a response.

He said the Belmont Wastewater Treatment Works needed major investment and that he had called in the Department of Water and Sanitation to assist.

There were cheers when Pillay described sections of road that Sanral had undertaken to repair.

“Grahamstown has become a dumping site,” Pillay said, explaining that he intended to make black refuse bags available. However, echoing a theme that continued throughout his presentation, he said, Please keep buying your own if that’s what you’re already doing – that will help us a lot.”

“The municipality is not liquid,” Pillay said. “There are unpaid bills and businesses are refusing to accept orders without cash upfront.”

He pleaded with local businesses to be patient and give him time to restore stability to the entity.

“Because it costs a lot more to procure from Port Elizabeth and east London.”

Pillay said Makana’s biggest debt was that to Eskom (R200 million), followed by Amatola Water, thhe Auditor General, the Department of water and Sanitation and Salga.

He explained the circle of depletion, as the quarterly equitable share payments were used to pay arrears Eskom debt, while residents and businesses collectively owed Makana R400m.

Pillay made no bones about the fact that Makana’s payroll bill was unsustainable and that there was inadequate staffing in critical areas.

The overarching plea from Pillay was for residents and businesses, including those with specialised expertise to support his efforts to turn the town around.

“I need the backing of every resident of Makana,” he said. “If we pull together we can turn the city around.”

Pillay said also key to the turnaround was the fact that he has support from the provincial government, and some in the national government.

“This municipality needs to be recapitalised,” he said. “But no government department will bail it out without a plan to show it is on the path to financial sustainability.

“This town has potential. If it didn’t I would have walked away from it long ago.”

MORE ABOUT YOUR TOWN FROM GROCOTT’S DIRECT

The name change objectors’ meeting last week brought up again a long-running process that has residents on both sides of the debate hot under the collar. Read the report on the latest steps at bit.ly/GrocNameChange.

The old stone wall on the corner of High Street and Somerset Street has been rebuilt after being broken down during the construction of a new business centre at 38 Somerset Street. Read what a historian, the councillor, the town planner and the owner have to say at bit.ly/GrocWall

Coming up in Grocott’s direct: former administrator in Makana Municpality Pam Yako weighs in on acting municipal manager Ted Pillay’s chances of success in turning Makana around, and speak frankly about what he’s going to have to watch out for.

Subscribe (for free) at www.grocotts.co.za –  on the box on the right-hand-side that says; ‘SUBSCRIBE TO OUR NEWSLETTER’.