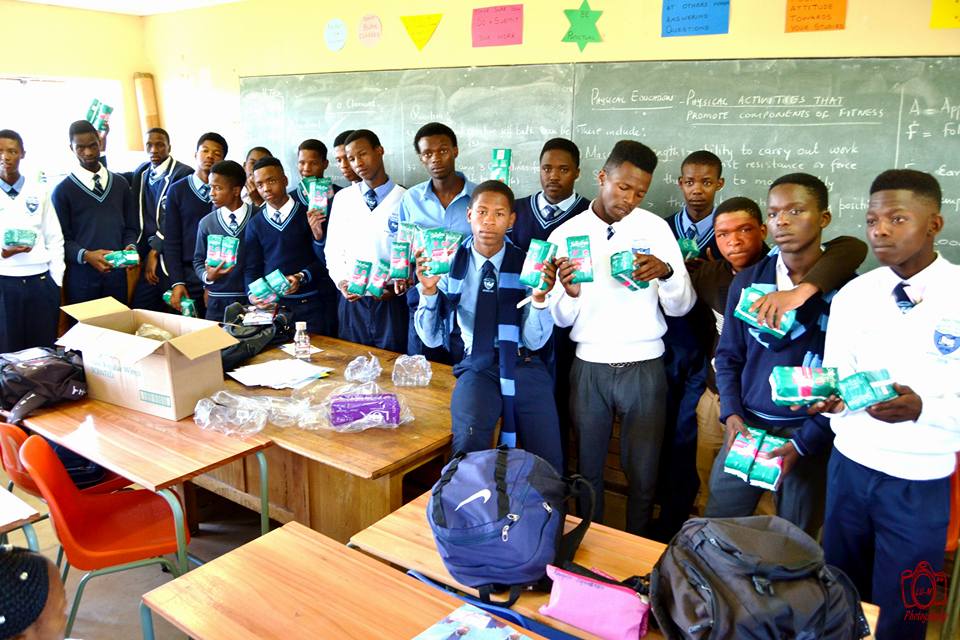 While couples swooned over chocolates, flowers and other affectionate goodies on Valentines Day last week, Grade 12 pupils at Khutliso Daniels Secondary School were treated to something much more practical. Organised by the Sophumelela Youth Development Programme, 18 matric boys gifted 23 girls in their class with sanitary pads and other hygiene items.

The programme’s founder, Sophumelela Ketelo, along with members Nwabisa Magengelele and Sandiso Mnguni helped organise the collection of sanitary pads, Lux soap and roll-on deodorant by issuing letters asking for donations two-weeks prior to the event.

The organisation started in 2013 before and was formally registered in 2017. Deputy Chairperson, Mnguni, stated that the aim of the programme was to “bridge the gap” for pupils in the township that are looking to go to university. “We want to uplift the learners, motivate and encourage them,” he added.

Magengelele told Grocott’s Mail that it was important for the boys to be the ones issuing the sanitary pads as a way to break the stigma associated with menstruation that young girls face. She said that she had spoken to the boys before the event, educating them about menstruation and the stigma attached to it.

The event was a huge success, pupils even asked for more sanitary pads to give to other girls outside their class, such as sisters or friends at other schools. Mnguni said the pupils were excited. “They responded positively to the idea of us giving guys the sanitary pads. It was changing the mentality, having that fresh idea.

“It was providing a different form of showing love to one another”.

Ketelo stated that in the future the organisation hopes to hold more events like this that involve an entire school rather than one class. “We have achieved what we wanted at this stage”, he said.

Magengelele commented for the future,“ we want to target primary schools too because that’s when [girls]sometimes get their period”.

The organisation has reached out to other schools including Nombulelo, Nyaluza and Mrwetyana.

Should residents wish to get involved Ketelo stated; “These learners need to know that there are people that care about them. Mentoring them, or just giving them a visit to share your story and encourage them. Any kind of support, if one can be physically present we would opt for that but if one can’t but would like to support the organisation financially, that is also welcomed.”

Soon residents can find the organisation on Facebook as their page is underworks, or contact them via email info@sydp.org.za

Previous ArticleProtect your pet – vaccinate!
Next Article Two names, better than one?