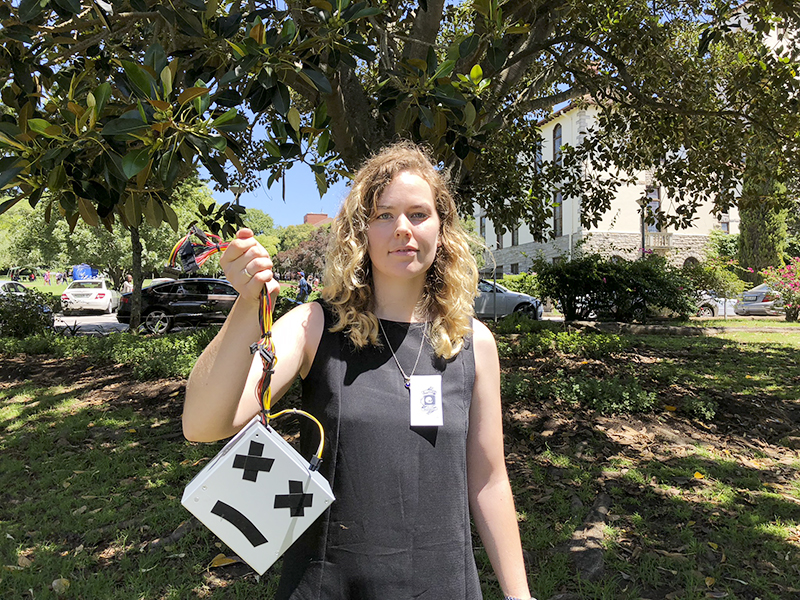 There is no ‘away’ say activists who organised a funeral for e-waste on the Rhodes University campus. Carey Finn reports

Strollers and students on the Drostdy Lawns at Rhodes University last Friday would have stumbled across a strangely dark scene. At 12pm, an unconventional funeral was held – not for a person, but for pieces of electronic waste.

Old computers and their components, outdated satellite television decoders, a yellowing scanner and clunky fax machine were among the e-waste given a formal send-off. But there was nowhere to send them – and this was one of the central themes of the event.

The e-waste funeral, which was attended by more than 30 mourners, many dressed in black, was the culmination of a week-long social sculpture project run by the Environmental Learning Research Center (ELRC) at Rhodes.

The idea, explained Dr Dylan McGarry, a post-doc fellow in the centre and one of the key organisers of the event, was to start conversations about the e-waste crisis facing the world, and African continent in particular.

E-waste is notoriously difficult to dispose of or recycle safely, containing toxic substances like lead, cadmium, mercury and arsenic – with serious potential ramifications for human health and the environment.

“We might throw away our old phones and laptops, but this illusive ‘away’ does not actually exist,” said McGarry.

Every year, up to 50 million tons of e-waste are generated globally, ranging from cellphones to toasters and other appliances. Africa is currently responsible for an estimated 1.9 million tons of the total per year, but is the fastest-growing contributor.

There is concern that the continent will also become a major recipient, or ‘burial ground’, for the world’s discarded electronic products. “It seems like the future of Africa has a lot to do with the future of how we decide to bury our electronic artefacts,” said McGarry.

“The objective of the funeral was to understand and ‘feel’ into the many issues that surround our relationship to technology and capitalism, and understand our addiction to disposability,” he said.

“We also wanted to create a space for individuals to share ‘eulogies’ of struggles they are experiencing with managing e-waste disposal here in our immediate environment.”

McGarry emphasised that the event was not merely an environmental awareness campaign, nor was it a publicity stunt, but rather a deep social learning process aimed at faciliated an embodied arts-based approach.

It forms part of a growing practice-based research initiative called “The Institute of Uncanny Justness: Re-imagining learning through suitably strange creative practice in the era of Climate Change” that is incubating at the ELRC and its Sustainability Commons.

From Monday, 12 February leading up to the funeral, seven ‘pallbearers’ – comprised of students and staff members – carried e-waste products around with them, quite literally shouldering the burdens of others.

Kgaugelo Sathekge, a second-year Law and Psychology student, said that carrying hers around for the week helped her realise how low awareness is around the issue. “Few people even know what e-waste is,” she said.

“I got quite attached to mine,” said Courtney Drysdale, a fourth-year Fine Arts student who had served as a pallbearer. “I might have to keep [this old computer fan], because there’s no away.”

The event was far from a gathering of Luddites, and Professor Eureta Rosenberg, Murray & Roberts Chair of Environment and Sustainability Education at the ELRC, joined McGarry in expressing appreciation for the items that had come to the end of their lifespan.

“I want to celebrate this beautiful thing and the clever people who made it, so that we are able to do our work,” said Rosenberg, who had carried an almost antique motherboard around with her.

“I look forward to the day that those clever people create a way we can use [things like this]without the skull of death on it,” she added.

Towards the end of the funeral ceremony, Anton Kivitts, who has been the Stores Administrator at Rhodes for 17 years, weighed in with a few words on the e-waste situation at the university.

“I’ve been a ‘pallbearer’ for many years, from the days when we made the shift from electronic typewriters to computers,” said Kivitts. “I’ve always felt that just discarding [e-waste] was not right, so we created a space to store the typewriters until we could find a place to recycle them.”

Rhodes is reportedly finalising a contract with a reputable recycling firm that will ensure its e-waste can be “reincarnated” in a new form.

Meanwhile, the e-waste products used in the funeral will see second lives as part of a display created by McGarry and his colleagues at the ELRC, or become educational tools for scholars learning about electronics.

Previous ArticleBotanical run and clean up
Next Article Protect your pet – vaccinate!