Learning to lead… from a local! 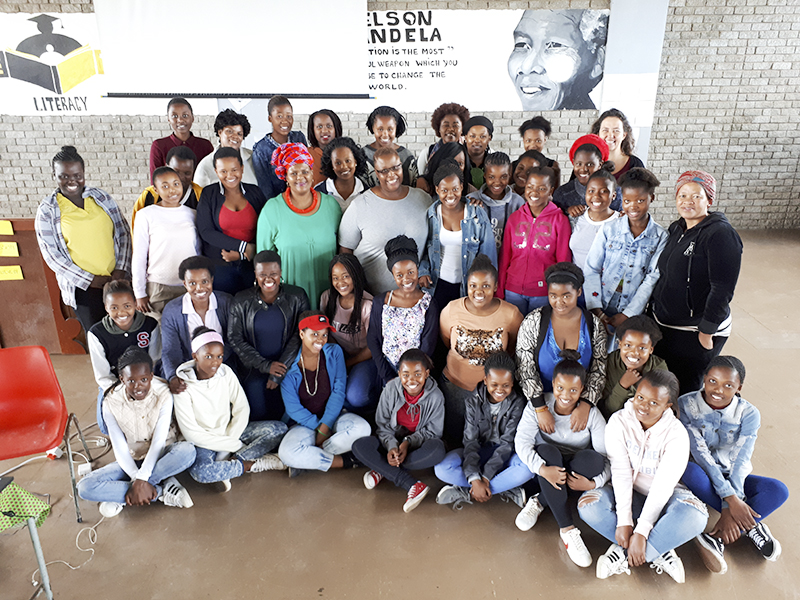 Around 40 Grahamstown schoolgirls are taking part in the Grahamstown Girl’s Leadership Project - an initiative by Pam Yako’s Zenande Leadership Consulting. During a break in the first workshop of the programme which focuses on developing self worth, leadership skills, and entrepreneurship, they posed for a photograph with organisers and mentors. The initiative launched in the lead-up to International Women’s Day on 8 March. Photo: Sue Maclennan

Rhodes University’s Financial administrator Linda Booi was among the Grahamstown women who inspired around 40 girls from local schools attending the inaugural workshop of the Grahamstown Girls’ Leadership Project.

Hosted on a recent Saturday morning at Nombulelo Secondary School, the initiative is the brainchild of Zenande Leadership Consulting’s Pam Yako, former administrator in Makana Municipality.

“It doesn’t matter whether you come from Grahamstown or Joburg,” Booi told the girls after relating her own journey to a successful career. Booi grew up in Grahamstown. “It’s only you holding yourself back if you don’t take opportunities that come your way.”

The workshop was the first in a number planned for this group, with more planned for later in the year, along with a trip to a local game reserve.

Yako, who explained she was funding the project from her own pocket, said it was something she’d wanted to do for a long time.

“I grew up in Grahamstown,” Yako said. “There were people and experiences that shaped my being – starting with my school principal at Nombulelo Secondary School, Mrs Dwani. This community made me what I am today.

“I asked myself, what can I do to give back in Grahamstown and I came up with the plan to work with girls who are elected representatives at their schools to strengthen their leadership skills.”

Personal mastery – developing a sense of self worth and understanding what attributes you bring to leadership; leadership – understanding how to make an impact if you’re elected; and entrepreneurship – the ability to generate and carry out ideas – are at the core of the programme.

“I want to give girls in Grahamstown hope, make them better leaders and open up their world,” Yako said.

“Most of all, I want to help them develop confidence.”

For more information about the programme, email pam@zenandeleadership.com