Flair and precision in GMS concert 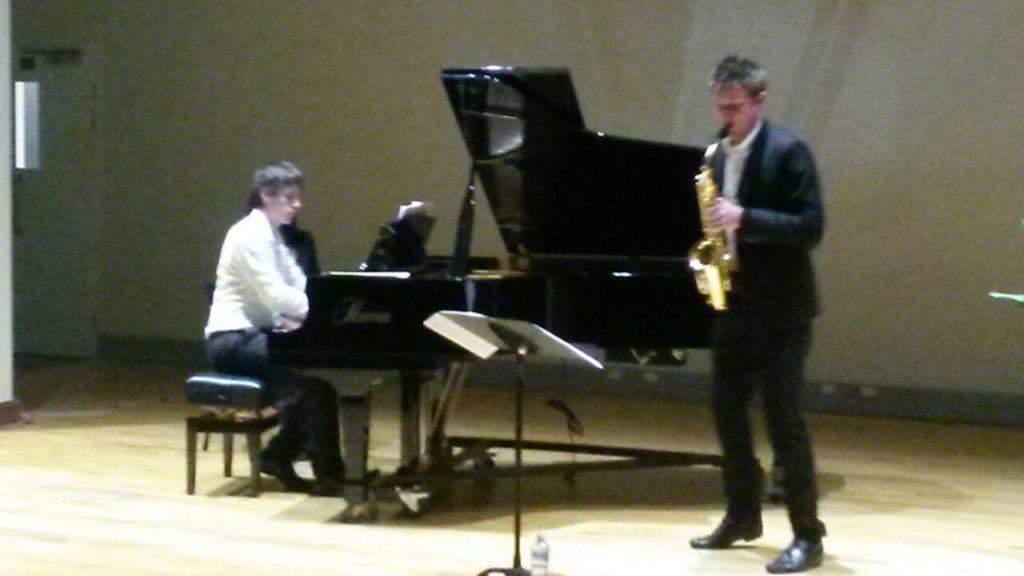 On Monday night, Grahamstown’s audience had the rare privilege to be treated to a connoisseur’s choice of saxophone music, presented to us by the former Kingswood pupil Adam Campbell, accompanied by Old Graemian, Peter Cartwright. The new NELM auditorium was jam-packed, quite a change from the dwindling audience numbers we have witnessed in the past decade or so.

The programme kicked off with the female composer, Paule Maurice’s, Tableaux de Provence, a staple of the saxophone repertoire.

It is a series of musical pictures from the southeast corner of France bordering the Mediterranean. The piece was started confidently by the saxophone, joyfully portraying a Provençal  dance, known as the farandole, by young girls, followed by a contrasting Song for my lover: nostalgic, with a suitably delicate vibrato.

Some fabulous ensemble work was heard in the next rhythmic soliloquy of the people of Mige (Gypsy girl) with a clean staccato ending. Next came the laments of friends that hover over the cemetery at Alyscamps, (a Roman burial site) expressing sadness. It was played with appropriate melancholy, which created a haunting atmosphere, contoured with beautiful phrasing and breath control.

In the final movement Campbell managed to capture the essence of the insect that the composer had in mind: playful yet delicate. It was easy to picture the flying creature from Provence bustling around in the garden!

The Tableaux were followed by Albright’s Sonata, where complex rhythmical patterns and rich harmonies were executed with flair and precision. Campbell made full use of the saxophone’s dynamic and tonal range.

He dedicated the performance of this piece to his late great aunt, Priscilla Hall, who was an ardent supporter of his career and of musical life in Grahamstown in general. Priscilla is fondly remembered for driving around on her Pasola, putting up banners for the Grahamstown Music Competition!

The pianist, Peter Cartwright, gave a very moving reading from some of her writing. The slow movement conjured up images of life and death, enacting a lament.

The mood changed completely in the last movement, beginning with a sombre, albeit passionate, recitative, to a dance with bebop and jazz elements, full of contrasting tone colours, really taking the instrument to its extremes.

A very high level of artistry and technical proficiency was required, and our two performers pulled it off remarkably well, especially with the exploring of the altissimo register on the saxophone.Cartwright’s accompaniment was supportive and he handled himself very professionally and musically; he seems to be making name for himself as an outstanding accompanist.

Campbell fully grasped the spirit of Piazzola in his rendition of Histoire du Tango; a work originally written for flute and guitar, but extremely effectively arranged for soprano saxophone and piano.  He played it flamboyantly and passionately, in such a way that one could picture the roughness of Buenos Aires nightlife and smell the smoky café.  The last movement is vibrant, energetic and technically very demanding, interspersed with haunting melodies.

The duo ended the evening’s performance with a work by the Japanese composer Takashi Yoshimatsu. His Fuzzy Bird Sonata was commissioned by the renowned saxophone virtuoso Nobuya Sugawa.  It was a most enjoyable and captivating work with influences of bird song, oriental folk melodies and jazz which was very effectively performed with circular breathing technique and impeccable intonation during the long phrases.

The total unity of the piano and the saxophone at the beginning where they played runs in unison was definitely commendable. The free improvisational section inspired a cricket on stage to sing along cheerfully for the rest of the performance! The Bozza Aria played with a dolce tone was very well received by the audience as a gentle encore.

This was a technically demanding programme for pianist and saxophonist alike, and they did a splendid job of touching their audience in such a way that a standing ovation was given. The performance was mind-blowing, and we can only wish Adam Campbell, who is just at the beginning of his career, as well as Peter Cartwright all the best for the future. I believe the best is yet to come!