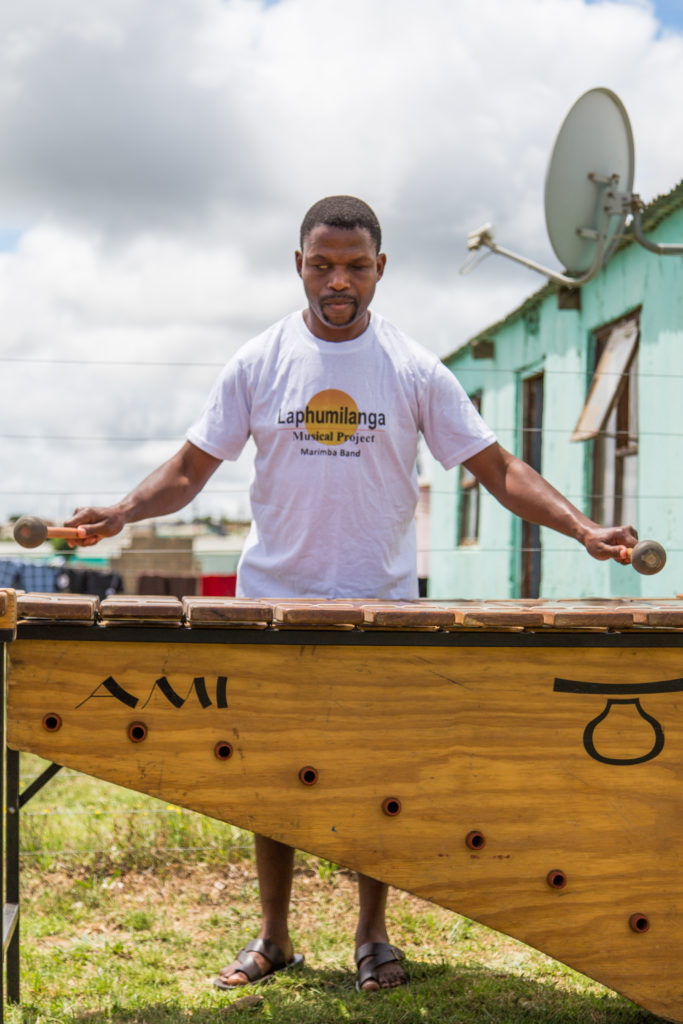 Your Town, Our Town:

Francois Mentoor is 45 years old. He has had his band, The Survivals, for more than 20 years. They play a typical “American Mix” of party songs like ’70s, ’80s, pop, and rhythm and blues in addition to some reggae covers and traditional African party favorites. To accommodate the varied tastes of their audiences, they have learned to flip the rhythms of the American songs to have a reggae feel. It has worked for them on a lot of gigs. “When the audience begins to feel a little more like dancing,” he began, “we don’t have to change the material, just the presentation.”

Back in the ’90s, the Survivals had a fortunate opportunity to do a tour of 18 dates on the West Coast in the U.S. It was set up by a relative in Connecticut. After the tour ended, the band went back home and became reliant on bookings from parties and weddings. “We don’t get many bookings from the clubs in the area,” Francois said, noting that the clubs are mostly white owned. “When we do, they don’t pay a lot. The most we can make at a club is about R1,500.” One US dollar equals about 12 rand, so R1,500 is about $125 in U.S. dollars.

They did have one occasion, though, when they were paid well, Francois said. It was for a private gig. “We got about R15,000,” he said. “They paid us that much because they had booked us to play for only an hour. But after the time was up and the people were feeling good, they kept asking us to play more and more. We ended up playing about 6 or 7 hours straight.”

Francois spends some of his time teaching kids in the area about music. He wanted to give them an outlet. He began teaching them at his home using his own equipment, which is very old and outdated, and much of it busted. His space was also limited as he has a family at home, so he reached out to the AMP for some assistance. Francois said that he had agreed to help them teach kids down at the Youth Hub in exchange for their helping him to get funding and equipment for his own music center. He said they pay him for teaching, but it’s only a couple of hours a week for which he gets paid about R200 (about $16). He doesn’t think it is enough.

Since the help with funding and equipment for his own music center has not materialized, he reached out to the AMP to see if they would loan him some of their equipment. It didn’t happen. That caused him to feel that, although the AMP is supposed to be set up for the benefit of the Xhosa children, the people who are benefiting the most might be the people running it.

He is a bit of a cynic, but that train of thought does not come from just anywhere. Francois’ perception of these types of programs have been jaded by the whole ordeal of living life as a black male in South Africa. He was nearly a grown man when apartheid fell, and Nelson Mandela was elected president of the country. Before that, black South Africans didn’t have the rights that even animals have here in the U.S. He told me about times during apartheid when unthinkable atrocities were performed upon him and others by whites. Like the time during a police interrogation when he was 13 years old that they forcibly slammed his male-member into a desk drawer for an offense he knew nothing about, and of the times when whites would speak to blacks in any way they pleased, which was usually with high disregard for their dignity. Francois experienced a lot of unfair treatment and prejudice during the apartheid years, he said, and still finds it hard to trust a white man. Even today, he said, “I take a witness with me anytime I’m going to speak with one.”

Francois’ jaded feelings may never change, but they could begin to mellow with more time. But I think the changes that Gareth and Shiloh and others like Jason at Inkululeko are working for will have to begin to produce bigger results first. As with Dick Ford’s program in Syracuse, those results are slow moving and sometimes only show up in “onesies and twosies.”

In Syracuse, there are various organizations, some grassroots and some more formal, that have been working diligently to create better channels to success for those who have been without it here. The school district, for example, has its Institute of Technology at Syracuse Central, and its Building Men, STEM and Career Technical Education programs. There are grassroots organizations like the Urban Jobs Task Force that are continuously prodding the political system so it doesn’t lose sight of the need for these programs. And there’s Joined Artists Musicians and Singers (JAMS).

JAMS has been receiving legal advice from the law department at Syracuse University and has been working from the ground up to keep visible the fact that diverse artists in our city need to eat, too.

Rhodes University has the biggest footprint in Grahamstown and the power to assist people of color there with pushing forward their own agenda. Thankfully they are working with people like Gareth and Shiloh who do understand that changes must be made and who are willing to invest their life’s careers trying to make a difference. But then there are the people of the world like Francois. He might not have the organizational skills needed to run the AMP or Inkululeko, but he feels that he needs to be taken seriously. If not, he and others like will him go on thinking that they’re really hearing the same old music and that the only thing that has changed is the approach.

Zandile knows Francois and can understand where he is coming from, but she also has the skills necessary to build change from the ground up, which can meet Rhodes’ top-down approach. She is considering starting a JAMS chapter in Grahamstown and has begun reaching out to some point people at Rhodes for legal assistance. Hopefully she will be able to manage Francois’ desires and couple them with Nombasa’s vision to create an organization that works for the people who need it most.

The people of Grahamstown are ready to dance now, so if Zandile’s JAMS is successful, Francois and his band will be able to play all new tunes.

To use a line from Francois’ way of doing things: The people feel like dancing. Has the material changed, or is it just the presentation?

This content was originally published by The Stand (online), 1 February 2018.

READ PART 1: ‘Sun rising out of the ashes’  HERE