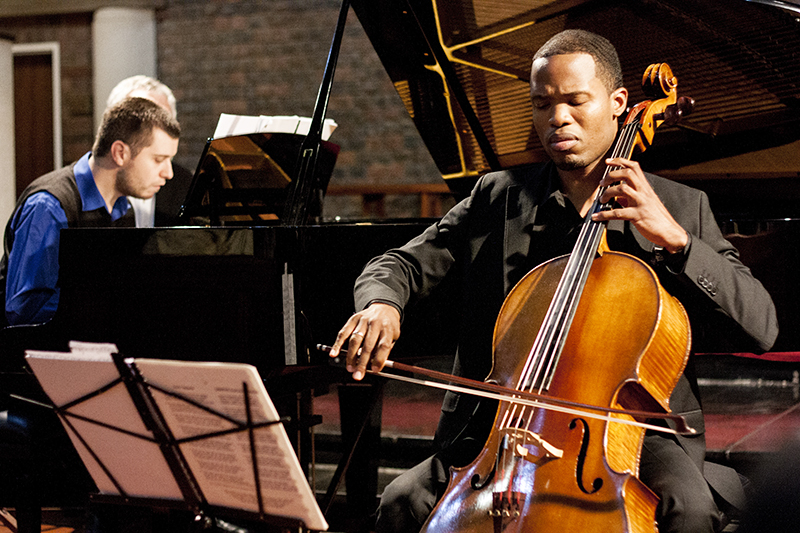 Anyone who had the pleasure of hearing Caleb Vaughn-Jones (cello) and J F Viljoen (piano) last Saturday would be surprised to learn that they have been playing together for less than a year.  Both are excellent performers in their own right, but they have the ability, which many virtuoso soloists lack, to blend with each other. No doubt, it helps that Viljoen also happens to be a highly accomplished string player.

Less surprising was the fact that JS Bach featured prominently in a concert at Kingswood. For many years, this school has done more than any other educational institution in Grahamstown to keep alive and develop the legacy of this genius. This has been done in a wide variety of ways.  Actus Tragicus was performed very much as it would have been at its first performance three centuries earlier – with (for example) one voice per part and conducted from the harpsichord.  Another cantata was accompanied by saxophones. Those would not have been the instruments for which that work was first scored, but I am sure that Bach, had he been present, would have liked the sound.

Saturday’s programme began with Kodály’s transcriptions of three Chorale Preludes attributed to Bach. Whether they really were composed by Bach matters less than the imaginative ways in which the transcriber and performers explored the tonal possibilities of the cello and the piano. There was, however, a sustained low note on the cello, which made me wonder if I was hearing an organ pipe.

Closer to original Bach was the D major Sonata (BWV 1028), although the instruments for which it was written would have been harpsichord and viola da gamba.  Sometimes those who perform old works on modern instruments try to reproduce the sounds of the original instruments. Better, I think, to use period instruments, if that is the desired effect. On this occasion, the playing was entirely appropriate to the piano and the cello. It was a profoundly moving performance. How absurd to claim (as some people do) that deeply intellectual music cannot also speak to one’s soul!

The final work of the concert – the Sonata for cello and piano by Rachmaninoff (Opus 19) would have communicated something powerful to every member of the audience. For both pianist and cellist this work is technically very demanding, but congratulations to them, that it was not the difficulty, which was uppermost in the minds of the audience, but the beauty and magic of the music itself.

In over four decades of attending concerts in Grahamstown this is one of those that I have enjoyed the most. Congratulations are due all round: for the effective publicity, a variety of refreshments during the interval and an attractively designed programme, which included the Director of Music Stephen Holder’s informative and brightly written commentaries on the music and the artists.

It is good that we can look forward to further performances by these fine musicians in the near future. Viljoen is on the staff of Kingswood’s Music School, and Vaughn-Jones has begun a period as its “artist in residence”.

Well done to Kingswood, both for taking this initiative and for the care involved over the purchase of the Yamaha G5 piano. All too often in recent years, when first-rate pianists have performed in Grahamstown, they have had to make do with instruments that are toneless and out-of-tune. Just a year ago, what a pianist visiting this town drew out of a tin-can of a piano, was simply heroic, but I doubt that he’ll want to repeat that experience. Kingswood’s new instrument – with its resonant bass, bell-like upper register and comfortable action – seems to be pianist’s dream, with the added advantage of the Kingswood Chapel’s lovely acoustics.

Previous ArticleGetting to the heart of creativity: a conversation with Caleb Vaughan-Jones
Next Article People’s State of the Province at a glance