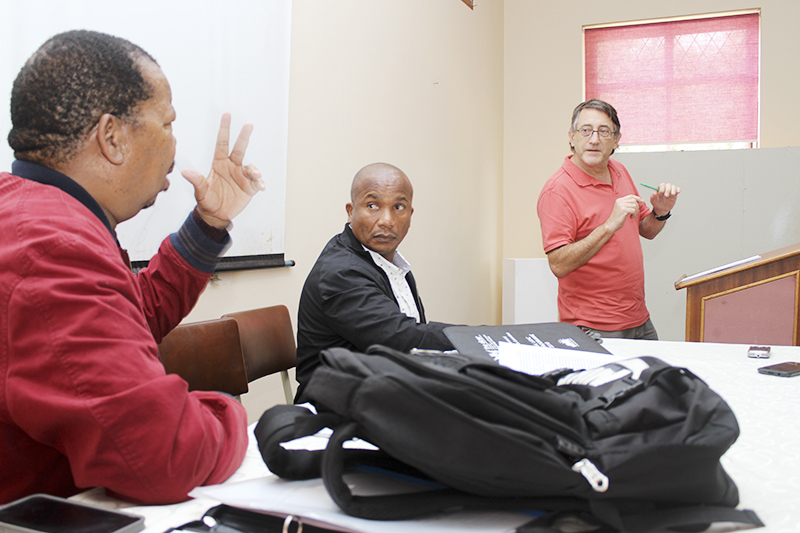 By SUE MACLENNAN and KATHRYN CLEARY

The gazetting of a decision to change Grahamstown’s name could be a matter of months away. This follows confirmation that the South African Geographical Names Council intends to recommend to the Minister of Arts and Culture that the city’s name be changed, on historical grounds.

The move comes after a heated meeting on Thursday 15 February at the Albany Museum, where objectors to a proposed name change had been invited to have their say. Among those hearing arguments were members of the SAGNC from across the country. The Council is made up of 15-25 members and Council Chairperson Johnny Mohlala said about 12 were present at the Albany Museum meeting.

Mohlala, who also interacts with Arts and Culture Minister Nathi Mthethwa as a member of the Ministerial Task Team for Transformation of the Heritage Landscape, said he didn’t know how long the process would take.

“It could be three months, six months – I don’t know how long it will take him to apply his mind,” Mohlala said in a lengthy interview with Grocott’s Mail after the State of the Nation address last weekend. But in addition to the Council’s formal recommendation to change Grahamstown’s name on historical grounds, he would also be speaking to Mthethwa in his personal capacity.

“I will bug him for a decision,” Mohlala said.

Several objectors were visibly and audibly angry and berated the process and the officials conducting it.

Mohlala told Grocott’s Mail the recommendation was on historical grounds.

“Graham was seen as a hero by his people at that time – but he has no hero status among local people,” Mohlala said. “In Grahamstown you will see hardly any African history portrayed.”

The Keep Grahamstown Grahamstown (KGG) campaign said they had received no official confirmation that the SAGNC’s decision was to move ahead on the name change.

“We have in the meantime written directly to the Minister of Arts & Culture in that connection providing reasons why the SAGNC’s recommendation should not be accepted,” wrote the campaign’s chair, Jock McConnachie in response to questions from Grocott’s Mail.

McConnachie has challenged the legality of the process on the grounds of improper public consultation, arguing that the current move was a continuation of a process started in 2007. McConnachie said he had records proving that a name change was not the preference of the majority in a series of meetings during that period.

Resident Ron Weissenberg voiced a similar opinion. “The department officials who have been pushing this flawed process must be held personally liable for costs and damages. It has been a private agenda based on hatred, psychopathy and rage.”

Mohlala, however, was adamant they had followed the process to the letter, having learnt the lesson from the failed name change attempt in Louis Trichardt. He said the recommendation was launched by an application by cultural activist Xola Mali in December 2014.

Final year Rhodes University student, Nicholas Babaya shared his idea for a solution with Grocott’s Mail. “The solution is this: have more than one official name,” he said.

“Keep the original name and then add (instead of replacing) another official name for another language – in the case, isiXhosa. In the case of Grahamstown, it seems bizarre that we are resorting to the new name ‘Makhanda’ for the town when we already have the isiXhosa name ‘iRhini.’ Why create a new name when we already have a perfectly good one? ‘iRhini’ is already used by isiXhosa speakers, so why – in an effort to give the town an African-language name – do we have to come up with a new one?”

Babaya concluded, “A name change for Grahamstown is a fiscal luxury which Makana cannot afford.”

The Grahamstown Residents Association’s concerns were not on the merits of changing the town’s name (“We would simply rename the residents’ association accordingly”) but the process.

Chairperson Philip Machanick said, “There should be a defensible process.

“The one meeting [in the current process]was not well attended. There was an opportunity missed to make opponents of the name change aware of the case put by the other side,” Machanick said.

“I am not arguing the merits but the process,” he told Grocott’s Mail afterwards.

WHAT IS THE SA GEOGRAPHICAL NAMES COUNCIL?